I think this may have been the first sf novel I read that I instantly recognised as feminist: not stealth, or muted, or sub-conscious. It was Nicola Griffith’s first novel, and if she had never written anything again it would still be stunning: it won the Tiptree Award, the Lambda Literary Award, and the Premio Italia. I did a podcast on it in 2012.

Ammonite is an exploration story set on a male-free planet; they’re not even needed for making babies. The impetus behind this novel seems to be, what would a world be like when there weren’t any men? And the answer is, a perfectly normal world, but with only women, which changes all the social dynamics. It’s a very simple premise, but the result is an outstanding novel. The setting and story stay with you, you want to know more, and to have the story continue.

The world is called Jeep – GP – and it was first investigated by the Company, an Alien-like conglomerate Griffith uses as a useful metaphor for authority and interference on a galactic scale. Company colonists were sent down to explore, and a planetary virus killed all the men, and a fifth of the women. Company promptly quarantined the planet, and set up extreme decontamination procedures for anyone who wanted to leave. This includes the complete removal of the subject’s blood lymph and bone marrow: I can’t see that one being compatible with continuing to live. The women that remained maintained the Company settlement for five years, and when the story opens they’re showing unmistakeable signs of becoming settlers rather than a temporary mission because, of course, they can’t leave.

Marghe the xeno-anthropologist is the newcomer through whose eyes we see the story unfold. She takes the one-way trip to the surface to make closer contacts with the natives, because this is the professional opportunity of a lifetime. The natives are human, living in a collection of communities with different social organisations. They originate from Earth, centuries before, which explains their mixed-up lingua franca of different Earth languages. Now, they’re all illiterate and tribal, some are settled and agricultural and some are nomadic and pastoral; most are peaceful, but one tribe is showing very worrying signs of irrational aggression. Times are not so much hard as fragile: a bad harvest or the death of a leader can tip a group into jeopardy, which is why the social trading and allegiance system of trata is essential for communal survival. Marghe is given help by one group, which puts her, and the Company settlement, in a trata relationship. For the first time, the Company settlement has a stake in the planet’s future, they will be consulted, they will be asked for help, they exist. But Marghe is struggling against her innate suspicion of Company, and her loyalties to her own people. Her instincts are to get away from the confines of the Company enclosure and live among the women of Jeep. It helps that she’s a brilliant linguist, so the first hurdle for understanding goes down quickly, and she heads out into this brave new world to see what she can see, and learn as much as she can. 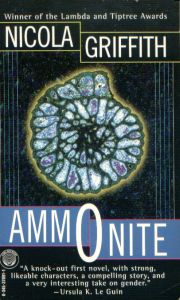 Naturally, she gets into trouble. She strays into a bad electrical storm, she gets lost on the high plateau, she gets captured by the worryingly aggressive nomadic tribe and is forced into servitude to survive the winter, in a tribe that is clearly malnourished and inbred, and is being influenced by a madwoman who thinks she is the reincarnation of the Death Spirit. Griffiths draws on lots of different Earth societies for Jeep’s different social groups, and her depiction of this nomadic tribe with an unpronounceable faux-Gaelic name is pretty chilling. Marghe’s obstinate refusal to just shut up and keep the fire going is infuriating, because it’s perfectly plain to the reader that she has no chance of surviving the hostile environment and the hostile people unless she learns and listens, but Marghe’s own demons are too noisy for her to listen to anything else going on, a lot of the time. Her eventual escape seems like a miracle, and not one that she earned with prudence or caution.

Once she struggles over the winter plain with much suffering and several lost frostbitten fingers, Marge is rescued from delirium by the farmers of Ollfoss, and she recovers her mind and her health in a society that less charitable readers might snoot at as being a feminist hippy commune, and lose interest in the novel at this point, but it worked for me. I really like the depiction of a society where children are shared between parental groups (see Vonda McIntyre’s Dreamsnake), and where different skills find different outlets. The village Marghe comes to live in seems like an ecologist’s dream of comfortable subsistence living, with hot tubs, communal gardens, a gong-banging pavilion to echo the electromagnetic pulse of the planet and a very sensible trading ethic. Making things is very important for these people, but the things that are made are not always tangible. Marghe falls in love with Thenike, a travelling story-teller, arbitrator and wise woman, and finds that her anthropologist’s training has given her these skills too, so she can become part of the native economy herself. Their travels put them in touch with news, and with political developments, which come to a head when the terrifying wild tribe of the north starts to raid southwards, killing as they go. The parallel plot, of what the Company settlers are going to do to avoid being blown up by the military cruiser parked in orbit to keep an eye on them, and how they’re going to fit into this world, comes to a head at about the same time. The plotting is very skilful, since the book ends with plenty of loose ends but also with the most urgent plot problems resolved and sorted. It’s all very satisfying, and leaves you wanting much, much more of this world and its richly imagined life. This is one of Griffith’s major strengths as a novelist: her worlds work at all levels, and embed themselves deeply in the reader’s imagination.

You may be wondering about how this all-female society breeds. How are the children conceived, if there aren’t any men to do what human insemination requires? Well, it’s all in the mind. The virus enables women to tweak their own gametes and the gametes of their lovers, when they go into a sex-related trance state, so that children (girls) can be conceived as an act of love. This seems perfectly plausible, if you’ve got the ability to work on your own biofeedback, as a kind of meditative extension of yoga or t’ai chi. You can do pretty much anything to your own biology, once you know what you’re doing and have the mental whatnot to tweak the cells. Anne McCaffrey used this idea too, in her telepathy short stories, Pegasus in Flight. Forget about the science, embrace the concept. 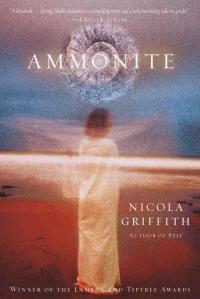 One of the consequences of there being no men (though there are male animals: the virus is apparently not a male-hater, just a man-eater) is that society runs itself differently from how we know it. This is the utopian aspect of Ammonite, exploring how a society could develop following only female interests. There are no hierarchies: that’s the most obvious factor. Group leaders lead through common sense, and put the tribe first. The mystical element to how these societies operate does affect their social practice: if you can look back along the generations and see how your great-great-grandmother did something, or dealt with a particular problem, then that naturally throws a wild card into the otherwise logical process of gaining experience and learning how to manage a tribal meeting. It would be like having the lives of all your ancestors on tap for a special consultation, taking the place of written records and archive-keeping that most human societies develop.

Without hierarchies, there is a strong focus on fair treatment, equal treatment, and no-one taking advantage of anyone else. Open discussion of disagreements resolves problems, and nobody seems to be angling for personal power, or gain. There are exceptions: the madwoman who wanted to lead the tribe to a bloody killing swathe over the planet was deranged, a result of too much inbreeding. Leifin, the woman who saved Marghe from the winter plains, shows signs of not only developing capitalist tendencies – an obsessive pursuit of trata for its own sake, and trading advantages beyond anything she actually needs – but also hunting for pleasure as well as for the skins of the creatures she kills. This is another of the enticing loose ends that Griffith leaves open: Leifin is hunting goth, a mythical creature whom most people think is an invention, but whom Marghe has seen, and whom Liefin has killed for its pelt. Marghe suspects the goth of being one of the indigenous inhabitants of the planet, a true alien, and also an intelligent one, who made the standing stone circles, and still survives in the forests. This takes the story back to a different level, where we can start questioning colonisation in all its forms, and look more searchingly at the Earth-imported human women who now act as natives.  This is a novel of unfolding imaginative invention, it’s rich and packed, and definitely worth rediscovering.

Nicola Griffith’s site is here. My review of her most recent novel, a historical novel set in England in the seventh century, Hild, is here.

9 thoughts on “Depth and richness in Nicola Griffith’s Ammonite”