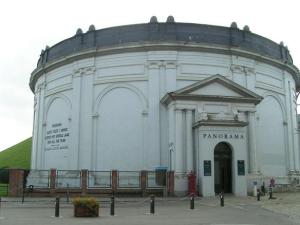 If you ever go to Waterloo, a 20-minute drive south of Brussels on the motorway, you’ll find a very small village entirely focused on the tourist site. It’s dominated by a massive conical mound with a stone lion on top, and a 19th-century circular building housing an epic panoramic painting of the Battle of Waterloo –  the Waterloo Panorama. You have to pay a swingeing €13.50 (£12) to go up the mound and go into the Panorama, which amounts to approximately 20 minutes of visit, depending how fast you are climbing the 226 (very steep) steps up and down the Butte de Lion (the massive mound), or lingering in the Panorama.

The Panorama is housed in a rotunda specially built in 1911, and was painted by Louis Dumoulin in 1912. It has been restored here and there over the past century, and various dignitaries, including our dear Queen, have been to look at it, their fading photographs displayed in a shabby exhibition space underneath the Panorama’s viewing gallery. The gift shop at the foot of the Butte de Lion has so many Napoleonic books, figurines, model cannon, fridge magnets and tapestry cushion covers that you’d be forgiven for thinking that Napoleon had won the battle. Waterloo is in the French-speaking part of Belgium (only just) so the marketeers know their market. There is a very powerful fondness in France even now for Napoleon, and for the might-have been counter-factual history if he had not been defeated in 1815 by the Allied nations by now very tired of his military aggression. 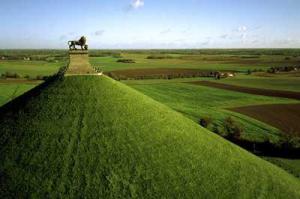 The Butte de Lion was built on the site of the wounding (not the death) of the Dutch Prince of Orange during the battle. The massive monument was designed by its engineer, working for the Prince’s upset father William I, to commemorate the Allied victory. Because the earth was taken from the surrounding battlefield, battlefield archaeologists now have to work very hard and minutely to retrieve material from this date, compared to artefacts from much more recent wars in the same location. The fields around the Butte are flat and sown with crops, and there are one or two solitary monuments to the battle in neighbouring villages. It’s a very peaceful and fairly sleepy spot (when there are no tourists), so the horrific slaughter of thousands of men commemorated in the Panorama is quite a contrast to the bucolic surroundings, and the rampant French nationalism in the gift shop.

You enter the rickety but venerable structure by coding your ticket number into the door lock, and then go up an elegantly curved double flight of wooden steps into a first-floor circular space. This houses the 360-degree view of the battle, painted in oils, and assisted by some simple but effective models of horse corpses and battered bits of fencing and wall in the foreground. You stand behind a viewing rail and walk round slowly, or rotate on one foot, mesmerised by close-up scenes of heroic death and dying. 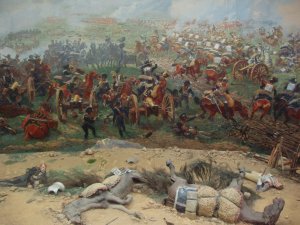 On the cylindrical wall the painting shows men on horseback in lively coloured uniforms and splendid headgear charging with lances, exuding heroism and nobility. A cowering battalion in green are standing their ground as large grey horses and pointed weapons hurtle towards them on all sides. The soundtrack naturally omits the screams and curses and raging agony of the sound of dying men and horses. Instead we get a gentle loop tape of subdued rumblings (carts? artillery?), a hint of bagpipes (the Belgians are very keen on the pipes), and encouraging shouts as if officers were rallying their doughty men for another charge. There is a sense that somewhere out of sight, bodies are exploding, but we’re not talking about it. 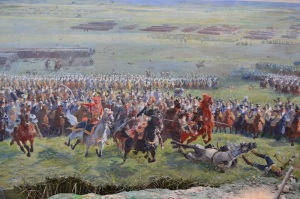 The Panorama projects a sentimental visual reinforcement to the idea that dying in battle is noble and desirable and a generally good thing. Yet there is a lot in the Panorama to show the detail not usually talked about in nineteenth-century battle paeans. Given that the painting was created only two years before the First World War (the German advance probably passed through Waterloo on or about 20 August 1914), Dumoulin was remarkably predictive in recording how pointed metal weapons go into and out of the flesh of men and their horses at speed, even if he did not show much of the blood that would naturally accompany this. Crude pistols are held in wavering hands as scared men try to kill each other. The expressions of the soldiers and horses are dramatically visible, as are many extremely nasty ways of dying. The speed of the cavalry charges is conveyed masterfully, as is the sense of impending collision and a brutal crushing underneath hooves for the soldiers in the way. 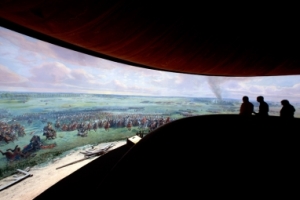 As you walk around the Panorama helpful plaques at foot level tell you what you are seeing – Marshall Ney at the head of his troops, the Dutch forces rallying again – and also where the stars of the show can be found. Napoleon at the head of his staff is a tiny, white-coated figure in the far distance, well away from any battle. Wellington is a little closer, and seems to be moving up to the edges of the melée, but there is a healthy distance between him and his senior officers, and any chance of death. Some horsemen are tearing away from the battlefield, probably couriers, not deserters. Local farms are burning, and the crops (this is June) are crumpled underneath hooves, bodies and artillery wheels.

One walks around and around, studying the faces and looking at the dispositions of the men and their regiments (the history of the battle has been so thoroughly researched as to make it possible to identify an intact Napoleonic skeleton simply by the initials on a box. The more you look, the more depressed and miserable you feel, looking at the supposed faces representing dead men, with their leaders safe at the back, and with no proper acknowledgement in the tourist presentation outside that these monuments represent murder and slaughter, not the national glory sold in the gift shop.

5 thoughts on “Death on the walls at the Waterloo Panorama”