Skip to content
Kate 20thC, Mary Renault, Naomi Mitchison, passion and secrets, political / social commentary, the life of the times, Why I Really Like This Book October 5, 2015October 5, 2015

Today’s letter in the Really Like This Book’s podcast script catch-up is R, and today’s author is Mary Renault. This twentieth-century British author (publishing from 1939 to 1981) is most famous for her meticulously researched historical novels about classical and ancient Greece. She is an outstanding author. Her novels are easy to slip into, because she tells great stories, and difficult to come out of, because she can tell those stories so well you don’t want to leave them. Her intelligence, and her research, are handled lightly. She uses a perfectly neutral narrative style that avoids using modern slang, or, conversely, what some writers call ‘odds-bodkinsry’, where the characters have to speak in a hideous approximation of the speech of the times they are supposed to live in. Mary Renault’s characters speak easily, naturally, plainly, and without affectations: we hear their message, we aren’t interrupted by noticing how they say it.

She wrote 14 novels, most of them historical. The most famous of these are her Alexander trilogy, and her two novels about Theseus and the Minotaur. These are indeed excellent novels, but I want to tell you about a little-known novel that is my absolute favourite because of how she uses a story to tell history. The Praise-Singer (1978) is about the poet Simonides, who lived and worked in this period, and is remembered now for his innovation in Greek lyrics, and for his memorial poems. In the novel, he is a composer and a singer, who travels Greece working for patrons and competing in the great annual festivals and competitions run by different islands and rulers. Our world shrinks to fit his worldview, because we feel we are among many different populations and cultures, whereas in reality we are only reading about events in the Aegean and a part of the Adriatic. This was the world for the Hellenic civilisation of the 6th century BC. Athens was the centre of the universe, Rome did not yet exist, Egypt is barely mentioned, but we hear a lot about the Persians and their vast and troublingly brutal empire.

You can divide most historical novels into two groups. One group concerns what could be called the ‘recovered past’: where historical events matter more than the stories of the individuals. The other can be called the ‘felt past’, where the story matters more than the history, which is only its setting. The novels of Nigel Tranter, or Dorothy Dunnett, for instance, are pretty much all ‘recovered past’, since they deal with Scottish history, and the characters in the stories are only there to allow the history to unfold. The novels of Georgette Heyer, are of the ‘felt past’, since their stories are more concerned with the characters and their relationships with each other, than with the historical setting. The setting is important, but those characters could live in another age and still tell the same story. 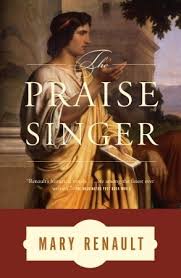 Now that I’ve cleared the theory up: where does Mary Renault fit in? Well, I’d say she was pretty much at the deep end of the ‘recovered past’. Her characters are pleasant, charming, delightful, intriguing, and very readable, but in this novel, in particular, they exist to allow the history of their times to be told. As I said, Simonides is a historical character. But for all his importance to the history of Greek literature and politics, the novel floats him like a feather on the waves of the history he was living through. This has the disadvantage of making the novel appear a little plotless, since there is no central thread drawing us through Simonides’ life and whom he meets. The unfolding of the events in Samos, in Euboia, in Athens: these cause things to happen, and these impact on his life, and that’s the story we are told. It’s a great story. Along with history, we are told truly riveting things about how different islands had their own customs and standards of behaviour. Naturally, to show these more interactively, Simonides happens to come from a very strict and severe society, Ceos, and when he goes out into the world as an apprentice to his master Kleobis, he sees the world as an innocent and as if he had never dreamed of anything so extraordinary and new. In short, he represents us, his eyes are our eyes, and we learn about ancient Greece as he does. 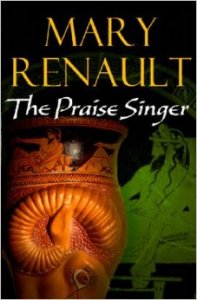 We do encounter famous names (names that even I’ve heard of, and I’ve never studied Greek history). We also brush past famous names in the street. Aeschylus, the immensely important classical Greek dramatist is mentioned twice, familiarly, but doesn’t appear on stage, so to speak. Pythagoras – he of the theorem for triangles – has a walk-on part, a genius mathematician who was possibly also epileptic, and is worryingly close to being attacked by his neighbours for being dangerously mad. At this point, we might start to wonder: well, we know about Aeschylus because his plays survived, miraculously, until literacy in western Europe was sufficiently widespread to circulate copies. But what about all the other ancient Greek playwrights whose work didn’t survive? Renault’s easy introduction to a society so plausible and familiar enables us to think more about why we don’t know more about it, why we have to learn what we can from scraps and fragments. In the case of Pythagoras, we might start to wonder how a genius, who perhaps had antisocial habits or disabilities or eccentricities that went against social norms, would have survived if his neighbours took a dislike to him, or a liking for his property, and had him hauled in front of the tyrant or other lord for blaspheming against the gods, or for just being possessed of a demon and in need of being sacrificed. How many other men who were ahead of their world in learning got killed too soon for their discoveries to reach anyone else? How many false starts have there been in history? Renault has this effect: her stories present you with history in such an accessible way, you automatically start to regard it as familiarly as we do our own. We perceive the gaps and we start asking questions.

It’s not just about individuals. She casually tells a story about a vase being painted experimentally the wrong way by an apprentice, who is saved from an angry potter’s wrath by a curious patron who wanted to see how it would look like after firing. Thus was red-figureware created. Simonides is invited to be a judge in a staged competition to hear all the versions of Homer in circulation among the rhetors. These were the common wandering bards who merely recited the classics, which meant Homer, from memory as they moved from farmstead to village. So many memories will breed so many mistakes, omissions, and false lines in The Iliad and The Odyssey, but by hearing a large number of versions, the true lines can be discerned by the experts (in this case, Simonides and his patrons), and a better master version will be collected and (a daring new innovation this), written down for posterity. This apparently really happened, but by enacting how it happened in Simonides’ story, Mary Renault shows us more precisely how poetry, and music, was memorised as a matter of course. The penny also drops that writing, when it began to be used outside the clerking classes, might well have been considered rather disgraceful for a poet to use, since it would make his memory lazy.

You may have noticed that I’ve been saying ‘he’ and ‘him’ throughout: women were not part of public society in this period of Greek history. A decent woman stayed at home till she was married, and then moved to stay at home in her husband’s home till she died. Men married, but men also took boys as lovers as a matter of course: this aspect of Mary Renault’s writing is the other reason she is so important. After Naomi Mitchison, who was notorious for being of the radical Left and thus politically suspect, Mary Renault was the first novelist to write fiction about societies where male homosexuality was normal. She doesn’t say anything about lesbianism, because she always describes male worlds. Her style is so natural, and – I have to repeat myself on this – so easy, that we accept unquestioningly the homosexual context as part of the history of those times. This is all very well documented by historians, but is also conveniently forgotten by modern homophobes. What I find interesting is that Renault’s style as a historical novelist is so pure that we are never tempted to go all anachronistic, and demand a fairer treatment of women, to ask her for heroines and female protagonists (which, as an ardent feminist, Mitchison did do, not always to good effect). A novel employing gender equality in a society where there was none would just be storytelling through counter-factual history, which is fine in its own place, but not in the pure spirit of re-creation that Renault used.

This is not to say that Mary Renault forgets her sex. It is an aspect little observed in her writing that she always uses men’s treatment of women as a measure of their moral worth. A male character who treats a woman badly, insultingly, dismissively, casually, disrespectfully, is a man with those qualities inherent in himself. He will come to a bad end. And there are plenty of bad ends. In Bronze Age societies death was common, frequent and easy and not often quick. Mary Renault was a nurse as well as a novelist, so we are given well-informed descriptions of what happens when illness strikes. Pneumonia brought on by getting chilled is a frequent occurrence, as are wound infection and fevers. More troubling are her descriptions of torture, which are written so memorably as to refuse to be forgotten. She doesn’t dwell on the horrors, and is too good at leaving the details to our imagination. This isn’t sadistic, but realistic. It was a brutal time in which to live: she does not want us to feel romantic about this age of emerging civilisation.

The Praise-Singer is, like many of her novels, a study of power and influence and politics, of leaders rising and falling and dying. It is about what happens to those who lose power, observed by those who never had power in the first place, but who rise and fall like the feather on the waves, as history takes the power away to give to someone else. She is a superb writer: do try her out.

One thought on “Mary Renault and The Praise-Singer”