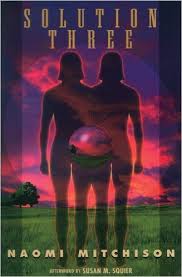 If you like elliptical, immersive, euphemistic strangeness in your science-fiction narrative, this novel is for you. Published in 1975, Naomi Mitchison’s Solution Three retains some slang that was archaic even then, like ‘cat’ for person, which made this reader jump, and certainly adds to the strangeness in the dialogue. Could you ever empathise with a character who says of another that ‘this cat told me’? The setting is a strange combination of the modern British National Health Service, Maoist self-denunciation and the insouciant babbling cheerfulness of Brave New World (Naomi Mitchison was great friends with Aldous Huxley in the 1930s). Homosexuality is the social norm for relationships, heterosexuals are more or less tolerated but labelled as ‘deviants’, and clones are born to surrogate Clone Mums, who have to watch their children carefully for when they start showing ‘the signs’, at which point the children are taken away from the nursery and ‘strengthened’. ‘Strengthening’ is such a horrible process for these four and five-year olds that no-one ever asks what it is; they simply accept it as part of Solution Three, which is the Way We Live Now. 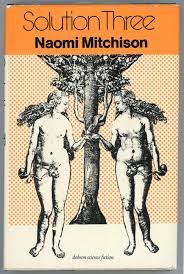 This is a post-something society: not post-apocalyptic or post-nuclear, but post-Aggressions. These appear to have been a long-ago total war, after which two far-seeing male and female scientists evolved a social pattern for future society to save humankind, decreeing that homosexual relationships would thenceforth be the norm as this would avoid future Aggressions. Thus the population of the civilised parts of the world is paired off whether they like it or not. Uncivilised areas continue to practice aggressive heterosexuality, which is a cause for concern and stern treatment. The characters in the novel are crop scientists, investigating outbreaks of agricultural viruses and struggling to maintain food supplies for a very crowded planet. This concern about the genetic modification of food sources is something Mitchison would go on to write about more fully in Not By Bread Alone in the 1980s. in this novel, she’s much more concerned about social engineering, the rights of maternity and enforced sexual norms.

The storytelling is engaging and chatty, creating an immersive reading experience, but this is a hard novel to understand. The elliptical dialogue glides across the surface of meaning, so it’s tricky to work out what is going on and what the consequences will be.  The subplot about Miryam the deviant and her husband struggling to raise their two children in their one-room flats (they’re not allowed to live together) reaches a happy ending when she is awarded a two-room apartment with a little balcony. Her feelings on being given such riches and forgiveness for her deviancy say as much about the society she’s living in as the actions that lead to this largesse. Mitchison writes from the heart outwards, concentrating on women and who they love, to sketch out an outline of this experimental dystopic future. It really is just an outline: there isn’t enough depth in this novel to produce a solid impression of how this society works, or even how it got to be this way. The details are in full focus, the rest is a bit foggy. But given the rarity of fiction of this period (of any period?) that tackles sexuality and ecology with such fair-minded objectivity, this novel is a literary historical treasure.

Solution Three is available second-hand. There are also new editions with scholarly commentaries at The Feminist Press, and at Kennedy & Boyd.