David Brin’s The Postman (1985) starts really well. I was very impressed with the central conceit, of a man struggling to survive in a post-apocalyptic survivalist society who starts a myth of a Restored United States to get the people to cohere around the myth and make it real. But it all fell apart through a dreadful lack of vision. I haven’t seen the film: until I started reading other people’s reviews while writing this piece I had no idea there had even been a film, and of course it would star Kevin Costner. Makes perfect sense. The novel is an unreconstructed old-school misogynistic western, no matter how much Brin tried to shove in a little of what he thought was feminism to make it palatable to the ladies. I also boggled at the valorisation of macho survivalism and neohippie lifestyles: meditative yoga in the midst of starvation and desolation, anyone?

Something I read recently about Emily St John Mandel’s marvellous novel Station Eleven resonated with my overall feeling of exasperation when reading The Postman: what is it that makes writers assume that, in a post-apocalyptic society, women will automatically lose their initiative, education, negotiation and all other management, multi-tasking and organisational skills, common sense and/or brains, and revert instantly, within a few years, to being medieval chattels under the control of a few men? What is it, for that matter, that persists in reinforcing the notion that men will want to become dictatorial cult leaders lording it in the middle of a wilderness, once the norms of civilisation have been stripped away? 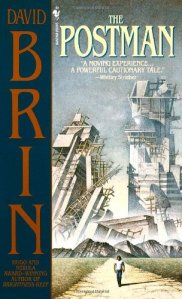 Margaret Atwood and Emily St John Mandel wrote post-apocalyptic scenarios where men and women contributed equally in how they worked out their joint and communal future. Why can’t Brin do that too? The Postman is a western, and there’s nothing wrong with that, in a historical setting of 200 years ago, when men and women’s socially conditioned roles produced that kind of society. It galls me that a writer who could write a short story with the vision and imaginative range of ‘Piecework’ (1990), for example, allowed his prejudices about the sexes to control this novel.

It starts so well. Gordon is wriggling through Oregon cliffside scrub in fear of his life with thorns ripping his worn-out clothing, as bandits raid his makeshift camp, steal or destroy everything useful he has, and leave him to certain death. He uses ingenuity, luck and an amazing discovery to find a miraculous way to survive in the wilderness. His luck and ingenuity keep the reader interested, we become invested in his survival, and in finding a new community. There has been an apocalypse, but not very many years ago: Gordon can remember his life as a drama student at a university, and How Things Used To Be. Hardly anyone else that he encounters seem to remember things as they used to be, to help them regroup and rebuild social communities: was there collective amnesia? His discovery of an abandoned car crash in a remote part of the mountains, complete with skeleton driver, gives him shelter for the night, something insulating to sleep under, and clothes and boots to replace his rags for the winter. He’s found the body of a postman (sidenote: why The Postman, not The Mailman, if this is an American novel?), with sacks of undelivered mail, and he has a brilliant idea that will – with a considerable amount of effort and luck – link the settlements of west-coast USA together for mutually assured survival.

In the present of the novel, people are living in scattered settlements scratching a living from year to year, and fighting and sabotaging each other’s communities over scarce resources, as well as to gratify the personal power planning of the male leaders with weaponry. Oh I got so tired of the petty dictatorships that Brin insists will become the norm in this dystopic future, and his insistence that only angry white men will be able to run a settlement efficiently through brute force and henchmen. No other leadership model may apply and succeed. There are only three kinds of women in this novel: the tired, visibly failing old woman who has lost hope; the eager nubile young woman (married and unmarried, because of course the rules of marriage and ownership will be used in a patriarchal post-apocalyptic society) who wants sex with Gordon every night; and the bonkers woman who will bring ruin to the recovering settlements unless Gordon can stop her spreading her crazy ideas. I have to quote from the fine review by Jesse of Speculiction to add to this point:

Brin writes the following to enlighten the reader on feminism: “Marcie’s borrowed clothes stuck to the blond concubine in ways that Gordon might have found interesting had he not been so miserable.”  Nothing says feminism like turning women into sex objects in the middle of your action scenes.

Other women in the novel stay silent and do what they’re told, behind the scenes, out of sight and sound and significance. Spare us from a resurgence of this kind of nonsense.

As Jesse says, the central conceit of The Postman is a reworking of the Johnny Appleseed myth. Gordon dresses up in his borrowed postman’s uniform, bag, cap and badge, and arrives at the first settlement on his route as an emissary of the government authorities to ensure that the postal routes are kept open and the settlements communicate with each other. The surviving people are desperate to hear that somewhere there is someone in charge, and that the old networks of social community are being restored. Gordon happens to find a letter to one of the settlement inhabitants, and this evidence of his veracity makes them believe him, and cooperate (to the scowling annoyance of the local Mr Big). Not everyone is so willing to believe, but not everyone is eager to throw Gordon’s tale-spinning off the premises. They understand what he’s doing and play along, willing to help if it staves off isolation and death from starvation. Banding together and keeping talking will also create unity to fight off the bandits.

Gordon drags out fragments of poetry and theatre from his memory to create a repertoire for his new role of post-apocalyptic travelling minstrel and bringer of news. (I don’t know why all the books and libraries on the west coast seem to have disappeared, or why no-one had any books that he could do some revision with.) The inevitable subplot of a mysterious collector of computer parts and batteries adds a conventional element of harnessing a fear of science and technology to balance the emerging inventiveness that Gordon’s fake but effective story is helping to proliferate. But the best part of the heroic myth of a leader appearing out of nowhere is that this leader is not a leader but a communicator, a transmitter of news and a forger of connections, who does not want to create his own empire like all the other men, but to move on to open up links to new territories once the connections have been made. The postman’s badge becomes an icon of hope, and groups of eager young acolytes take up the challenge and spread out searching for other communities to connect to the rest. It’s a wonderful vision, which is why I am so aggravated by Brin’s failure to use it to its full potential.

David Brin has posted an update on his thinking for this novel here, with convenient Readers’ Notes. Unfortunately these show how uninterested he still is in how badly he portrayed women in this novel.