The South African novelist Laurens Van der Post is author V in the Really Like This Book podcast series scripts catch-up, and he is an awkward writer. He used to be very famous, but after his death in 1996, and after a detailed biography that revealed him to have been a liar and a fantasist (Storyteller, by J D F Jones), his reputation has flattened out. He was a soldier, an explorer, a disciple of Jung, and a guru in his old age to the great and the good, most famously to Prince Charles. All else being equal, Van der Post is best-known now for his early prominence in African wildlife conservation and for championing the cause of the Bushmen in southern Africa. His fiction is almost all written about Africa, and is rooted in the apartheid era, even if the characters are trying to move away from apartheid and show by example how to live a different way of life.  He borrowed his plots and his writing style from many different writers, which is a form of praise, but if you do it too much, its theft. His novels give the odd feeling of being one kind of animal dressed in the skins of several others, a peculiar hybrid that speaks with many voices to different readerships, all at once.

His fiction can cause problems because it combines a lot of contradictions: it’s packed with really exciting adventure, and also packed with extraordinarily dull philosophy. It’s written with great insight, and is also written with no insight at all. It’s addictive for the way he writes about African life and nature, but it can be simply implausible for the way he writes about African society. We also now have to weed out the parts that are no longer palatable. 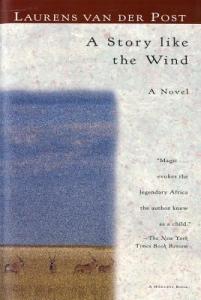 I first read A Story Like the Wind (1972) when I was a student. I’d bought the book on my way home on a Saturday, and had nothing to do that evening so I started to read, and finished the book before dawn. I simply couldn’t go to sleep until I’d finished it, and this novel is not a short read: it’s dense, and a lot happens. The memory of exactly which day in the week I bought the book is important, because in Scotland in the 1980s no shops were open on a Sunday, and so I had to wait a whole 36 hours until I could line up at the bookshop to buy the sequel on Monday morning. The sequel – A Far-Off Place (1974) – is crucial, because A Story Like the Wind finishes after a completely unexpected and brutal massacre, leaving the principal characters trapped in a cave, with only a desert crossing as their way of escaping the attackers. I didn’t do much work that Monday, and I still reread both novels occasionally as a marathon wallow in African adventure. They’re deeply satisfying, but, as I get older, I see their flaws more clearly. But the adventure still wins hands down. From this point, there will be spoilers, so beware.

A Story Like the Wind is set in a utopia, a farm somewhere in southern Africa. It could be in Namibia between the Botswana border and the Namib desert; it could also be near the Kalahari on the Zimbabwean border. The farm is a utopia because the farm’s owners are in partnership with the Matebele tribes in the area, rather than employing them, and have enlightened, egalitarian and human attitudes. For the period in which this novel was written, never mind in which period it is supposed to be set, which is some time in the 1960s, this is quite remarkably advanced. The community has created a holistic farming paradise, and the son of the white partners, François, grows up as a member of several tribes at once; of the Matebele, the Bushmen, and the whites.

The adventure begins when François rescues Xhabbo, a Bushman caught in a lion trap, and is taken by him to a secret cave in the hills where Xhabbo can recover before going home. Xhabbo has to be kept secret, since Bushmen were still being routinely slaughtered or enslaved by other African tribes at this time. This is one of the shocks in the story that we can either ignore as a fantasy or grapple with as something that was true not many years ago. The farm doesn’t have a telephone, and neither does it seem to have any farm vehicles or radio: this is odd for the post-Second World War period. François does not need to leave home to go to school in the city because his parents – both teachers – create a home school for him; but none of the many Matebele children with whom he plays every day go to school with him, in fact they don’t seem to attend school at all. This is a story set in a time warp, where Van der Post is creating a perfect environment from the point of view of a white teenage boy, but where the social conditions are those of many years earlier than the political events that drive the action. 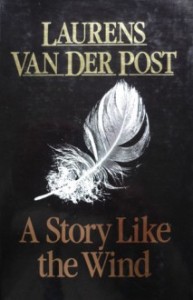 Let’s just forget about that for now. François is a hunter and a farmer’s son, and the devoted student of his two great teachers, ‘Bamuthi, the Matebele chief of the farm, and Mopani Theron, a former white soldier who keeps a game reserve the size of France, a few days’ journey to the east. Through reading François’s life we are immersed in Africa, all its wildlife, the necessities for survival, how to camp in the bush, how to move silently, how to observe baboons, and how to travel fast and light in an emergency. It is an idyllic life, until François’s father dies. His mother stays for too long in the south to sort out the will, and strange armed men are seen travelling fast towards the west. They kill animals indiscriminately, which is a sign of great evil, and is also a sign that these strangers will kill more than impala once they really get going. The farm is too easy a target, and too dangerous a risk for the mercenary army to leave untouched, as they gather to do something terrible over the border in Angola during its War of Independence. 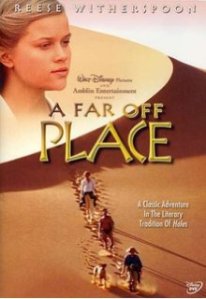 Other strangers arrive to settle in the area: a stiff-upper lip Englishman and his Portuguese daughter Nonnie, who is exactly four months and three days younger than Francois, and by whom it is quite obvious that François will be enchanted. This is not a torrid teenage romance, however: Van der Post would not know how to write such a thing, and so the story maintains an almost Victorian innocence between them, even into the sequel.  But, unexpectedly, Van der Post did know how to write women: his success at letting us into the head of Nonnie, giving us the convincing perspective of a teenage girl, is very surprising. He focuses intently on the motivations of François and Mopani in the first novel, we are incessantly given minute digressions on their emotional state and on their decisions: we even have an abundance of dog psychology, since François’s ridgeback Hintza is a very important character. But Nonnie is the truest and most convincing character, and she makes François human again when he is struggling under the weight of responsibility. She is a modern girl inserted into a story of 19th-century adventure. (Disney made a film of the two books combined, with the young Reese Witherspoon as Nonnie: the stills look good, but I’ve not seen the film.) 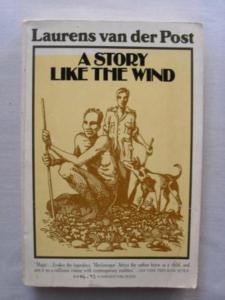 Van der Post is determined to make us learn from this story, and we come out the other end knowing a great deal more about southern African wildlife and even some words from languages we may never have heard of. He also impresses on us how much danger is present in the bush for the ignorant, and how François’s life is surrounded by enemies. His mother and Nonnie’s father are murdered, all his friends on the farm are killed; only he, and Nonnie, and Hintza survive, because Xhabbo has come to warn them in time that the mercenaries are moving in with intent to kill. At the end of A Story Like The Wind they are in Xhabbo’s cave, safe but trapped, and François has to work out what to do next. The sequel, A Far-Off Place, is actually far more exciting, since it is all a struggle for survival, and François does some really remarkable things with a gun and explosives for a fourteen-year old. The struggle in A Far-Off Place is also much more intimate and personal: it is about life and death, and nothing else, and is completely compelling. But I prefer A Story like the Wind because of the farm, Hunter’s Drift. It is a perfect home, it is composed of marvellous food, marvellous people, perfect sunsets, milking cows, playing mud battles at the ford, watering the endless gardens, tracking and hunting for the pot. This novel is particularly good at insinuating the sense that that danger is never far away, and so none of this paradise is taken for granted. I also love A Story Like the Wind because it is, at a very straightforward level, a story about the drama of life in Africa. François gets his first gun on his tenth birthday, and shoots an elephant and a leopard shortly after he is thirteen. These are epic events, and both novels are epic narratives. They are not Wilbur Smith, they are absolutely not conventional thrillers with added wildlife. The language itself shows us this: Van der Post uses speech patterns and idioms from Dutch and Sindabele in the English narration. This produces a deliberately patchworked language that mimics the collage of cultures and life in the book. Enjoy the action, the language, the descriptions, the stories.

The most striking element in this novel is suddenly very topical, since I’m writing a few days after the announcement of one-third of Britain nuclear interests being taken over by China. The money and armaments supplied to the mercenaries comes from China, and there is a fairly racist portrait of a Chinese commander in A Story like The Wind. This says a lot about the prescience of Van der Post’s early suspicions about political manipulation and aggression over the land and resources of his Africa (he was undeniably African, even if he was white) by Chinese interests. This has been going on for a long time.