The first thing to be said about The Goblet of Fire is that it is gigantic. It must be three times as long as the earlier novels, and is very heavy to hold, a book that really depends on good binding. The second thing to be said from this podcast script formerly known as Really Like This Book turned blogpost is that the raging teenage torments I mentioned in Harry Potter and the Prisoner of Azkaban are here in full measure. Puberty, hormones, crushes, great sweeping dives in the pit of one’s stomach: Harry has them all. Ron and Hermione do too, only we don’t get to hear about them so much. The way the boys approach the ordeal of the Yule Ball is a perfectly-observed masterpiece of understanding how teenage boys think, and how gormless they are in facing their first serious mating ritual.  This increased attention for the interior emotions of the leading characters has the effect of reducing even more – for there was hardly any attention paid before –the existence of the older and younger year groups in the school. Individuals swim into and out focus, when they become important, but otherwise the fourth year students at Hogwarts may as well be there on their own. 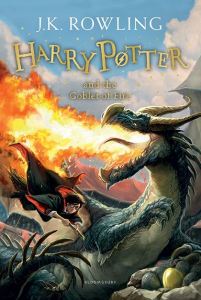 The passion for Quidditch is part of this, of course: gladiatorial contests between school champions have a lot to do with the sublimation of the emotions, and with freeing up inarticulate feelings. Proving yourself in public in sport reinforces the person’s identity, and demonstrates skills and competences that, as we see, do not look so good in other settings, or when being disgraced by angry teachers. The Triwizard Contest is just a bigger and more exclusive series of character tests through strategic planning and physical action. I found the involvement of the adults in this contest a bit strange – Charlie and colleagues bringing over dragons and so on – because it’s just an inter-school contest, after all. The importance that the adult characters place on things happening to teenagers at school seems extraordinary,  but if we read these events as having adult impact and implications, well, that’s all right then. But it’s a children’s story, I’m forgetting. Or perhaps now, in book 4, it’s a Young Adult novel. Ron’s jealousy is impressively unsettling because it shows how the tight friendship of Harry, Hermione and Ron is not exactly unravelling, but under attack by external forces. Ron’s touchiness because his needs are becoming more important to him than Harry’s safety, and Harry getting grumpy under the stress of being a Goblet of Fire champion, are a beautifully plotted complication. 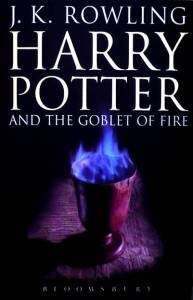 The mechanics of the story of the Goblet of Fire are outrageously complex, far more than in The Prisoner of Azkaban. I think they’re too complicated, because they creak as they are shoved into position, and some things don’t join up. Why does Mad-Eye Moody suggest to Harry that he might think about becoming an auror – the first piece of sensible advice Harry has been given about life after Hogwarts – if the person actually saying this is an evil Death-Eater liable to be hunted down and captured by aurors? The sheer elaborateness of the fake Moody plot is a waste of time, since if Crouch senior is running the competition, he too could have been in place in the school to set up the Portkey. Bertha Jorkins is a similarly creaking piece of plot, laboriously signposted and warned about so many times, when the reader has known since the first chapter what happened to her and what Voldemort learned from her. This novel needs more editing. I wonder if, at this stage in Rowling’s writing, she was being bogged down with film involvement, dealing with the tidal waves of fan interest, not to mention managing her business affairs and her personal life; being made so busy, in effect, that she did not have the time to focus on this novel as clearly as she could have done. Her publishers also have some responsibility, but it would take a brave editor to slow things down with requests for just one more rewrite, with publication dates set in stone that a world of fans were demanding.

Bertha Jorkins, yes. Something I’ve been thinking about a lot while reading the whole of the Harry Potter series is that Rowling’s choice of names is very considered. They’re very British, for a start. I don’t know if any were translated into more American-sounding names for the US edition, but they were certainly translated for some non-English editions. In Dutch, for example, Harry and Voldemort keep their names, but Ron is Ron Wemel, and Hermione is Hermelien Griffel. I wonder if these alternatives also convey the deliberate tweeness, the sense of a 1950s postwar society, a bit Wallace and Gromit, handknitted and suburbanly small-scale? Rowling does it beautifully in English: very few of the personal names are ones you would encounter now in real life, except the Patil twins, whose names are ordinary and timeless. The average names at an ordinary British school today would not be Neville, Ernie, or Percy. Colin, Dennis, Ron, Harry: maybe. Hermione, Lavender, Pansy? Not at all. These are cartoon names, from the Beano comic strips of the 1970s which I expect Rowling read along with all our generation, names from an era where life was less open to international influences, and identities and norms were much more assured and predictable. The more magical names are also very interesting because they also seem to have fashions: Remus, Sirius, Minerva, Lucius, Severus: nobody in the younger generation at Hogwarts (except Draco) has an elegantly classical and timelessly romantic name like that, they are much more mundane.

Something mundane that hasn’t dated is the bigotry and terrorism that The Goblet of Fire presents. It starts with the Muggle-baiting at the Quidditch World Cup, which to older readers is straight out of vampire films and stories about Frankenstein: the attack by the mob against a weaker enemy, at night, with torches. It also has deliberate overtones of the persecution of the Jews by the Nazis, but the much earlier and more medieval practice of witch-hunting comes to mind just as forcefully. Rowling is showing that the Death-Eaters, just like the Nazis, just like witch-hunters, and in our own time, just like ISIS, are a mob of violent bullies with more power than their targets, so they can do what they want with violence.

Muggle-baiting has another side, which is Muggle-teasing, laughing at Muggles because of how they do things. Arthur Weasley’s fascination for Muggle artefacts is a very early aspect of this perspective, but while he does not think that Muggles are automatically inferior, or at least peculiar, everyone else in the wizarding world seems to have this attitude. Which is very odd, considering how much care the Ministry of Magic take to keep Muggles from even noticing the wizards and witches among them. There’s something emerging there from that equation about the balance of power between the worlds that shows, very quietly for those who aren’t dazzled by the magical elements, that the Death-Eaters’ ultimate aim is to take over the Muggle world too, and exterminate it. This gives readers a much more personal reason for going boo-hiss at the Death-Eaters, and Voldemort.

The most important thing to happen in the Goblet of Fire is that Cedric Diggory dies. The death of a hero character, or at least a leading protagonist, simply does not happen in the British tradition of children’s fiction (I cannot think of an example: add one in the Comments if you can, please), especially to a walking, talking character who’s had a role in the previous novel, and seems like an all-round good bloke. The irritating boastfulness of Mr Diggory, and Cho’s besottedness for Cedric rather than for Harry, complicate his role in the story. Rowling does not make him an obvious victim. She makes it clear he will be missed, at the same time that we see that his removal is actually good for Harry. She really piles on the opportunities for us to feel guilty. His death forces the plot to change gear, and justifies the adult involvement in the competition. Adult wizards and witches with roles and responsibilities in the adult wizarding world all need to be there to hear that Voldemort is back. The horrified moments after Cedric’s death are very adult: there is passionate grief, there is vindication and blame, there is a further attempt to nobble Harry again, and then there is the business with Moody in the trunk that almost ruins the crescendo of deep emotion that Cedric’s death and the horror of Voldemort have produced. This novel is a masterful orchestration of emotion and fear. Onto Book Five!

6 thoughts on “Harry Potter and the Goblet of Fire”