Reading for this last podcast script catch-up from Really Like this Book, I could not concentrate on anything else until I had reached the end of Harry Potter and the Deathly Hallows. I thought I had read it before, but I must have skim-read it so fast to reach the end before the next family member in the queue took it off me, that I simply didn’t read it properly. I vaguely remembered the Battle of Hogwarts, and – spoiler coming – George dying, but everything else had gone.

The Deathly Hallows is the strongest of the seven Harry Potter novels, which really impressed me. Maintaining and improving the standard is so rarely the case in a long series that’s taken years to build. This novel is a spectacular multi-episode ending for the series, and ties up loose ends in beautiful, logical bows. Rowling shows her stupendous management of writing the strong emotions of inarticulate teenagers, and gives the reader respite breaks between the moments of danger, terror, chasing, and stunning spells, but the tension doesn’t let up.

Lee Jordan’s samizdat radio broadcasts on Potterwatch do more than just give us, and Harry, a laugh. They remind us of secret communications between resistance groups, from the Second World War Yugoslav partisans and the Résistance onwards, which indicates what the opposition is like. They give exposition – passing on information to the reader – in a new way, varying the narrative. They are updates on characters and events, which we sorely need, since the plot won’t allow Harry, Hermione and Ron any other way of communicating with the wizarding world.  Potterwatch reinforces the resistance to Voldemort by raising spirits, strengthening resolve and sparking new ways of working together. And it makes Harry feel that he isn’t alone, that there are people on his side, even if they don’t know where he is. It’s a tonic, a real boost for everyone’s morale, including the reader, since things have gone very dark and gloomy at this point in the story.

The plot is extraordinarily complex – what I struggled with over Horcruxes in the Half-Blood Prince is nothing to the density of story and implication that we wade through in The Deathly Hallows. There is the main plot, and several secret subplots underneath that, plus complications caused by communications from beyond the grave – thank you, Pensieve, and the magical portraits. Themes begin to re-emerge from the deeps, all joining up in the climactic ending episodes. Reading this novel is to mutter ‘oh, so THAT’s what it was about’ on repeat.

We have a new father figure for Harry: Snape, of all people. So much has been said about James Potter’s friends, and his ghost, and his influence on Harry, that we have forgotten that Lily Potter had friends who would want to help Harry too. Snape stopped being her friend a long time ago, so I am not sure I accept the likelihood of – a really big spoiler  – Snape having loved her so much all his life that he will undergo all kinds of torture and take so many risks to keep Harry safe for her sake. Yet, it makes sense in the plot, it makes sense for character motivation, and it is supported with enough extra things in Snape’s personality to make it pass. He’s a brilliant Occlumens, so no-one will ever know what he’s really up to.

There are new adult advisors, because Bill and Fleur’s house is the new place of refuge. Bill Weasley is such a hero, anything he does or says must be reliable, whereas the slight air of foolishness that Mr Weasley was first created with makes his heroism seem almost a surprise, rather like Neville cutting off Nagini’s head with Godric Gryffindor’s sword. Whoops, spoiler. Harry’s furious rejection of Lupin, sending him back to his family in disgrace, is very unexpected, but it also makes perfect sense for the characters and for the plot. At first, despite Lupin’s elaborate proof of who he was when he arrived at Grimmauld Place, his announcement that he was abandoning the pregnant Tonks to stay with Harry seemed almost to be a suggestion that here was a Death-Eater in disguise, it seemed so out of character. But this was Lupin’s last chance to be an adventurer, to bring the remaining member of James Potter’s old gang together with Harry’s gang. Being the last member of the gang means that no-one really understands. Hermione sees through Lupin’s sad yearnings, of course, while Harry is simply furious that another baby might lose its parent. This is a recurring theme in the series that we might not have noticed, but so many children in the novels without one or both parents – Tom Riddle, Dumbledore, Snape, Harry, obviously, Neville, Seamus (or is it Dean?), Luna, and (spoiler) Teddy Lupin – make a superbly logical connection with what happens to the Malfoy family at the end of the saga.

Our heroes’ infiltration of the Ministry of Magic is a muddle, almost a farce, with all the doubled identities and bluffing of experienced wizards through Confundus jinxes and the Polyjuice potion. But because we’re being shown the work of the Ministry in the wake of our heroes’ rampage of desperation, we also see, properly, that the Ministry’s persecution of half-bloods and its encouragement of anti-Muggle attitudes is horribly serious, and horribly, cleverly, reminiscent of totalitarian rule that starts its repressions small. Getting a few victims out of the Ministry is a great thing to have done, but the fact that the victims also need to leave the country to be safe, just as Hermione has sent her parents to Australia under heavy enchantment, is an abrupt reminder that wizarding has gone very bad indeed in Britain. I’ve read a lot of fantasy and science fiction novels in which Britain is isolated because of a plague, or because of nuclear holocaust, or a supernatural affliction of the mind, all functioning as a commentary about the arms race. This is the first time I’ve read magic being used as a commentary on Nazi persecution, Stalinist terror and even the medieval English persecution of the Jews in the thirteenth century. It is quite clear that where half-bloods are being persecuted now, Muggles will be next. As a weak form of comforting amusement in this grim scenario, I do like the idea very much that each new British Prime minister receives a visit at the start of his, or her, term of office from the Minister for Magic, and is suitably terrified and appalled. It’s a clever way of joining up the thinking in these novels, that the bad things that happen can happen in a different form without magic in our own world. In the words of Mad-Dog Moody, constant vigilance.

When Harry, Ron and Hermione go to ground, they Disapparate daily with the Weasley tent to a different location, trying to think of ways to identify and find the Horcruxes. It’s a terrible task, because there is no leadership any more, and these children are struggling to throw off their fear, worries and confusion. Having to take turns wearing the Slytherin locket from the underground lake is not helpful. It gets to Ron worst of all, so he abandons Hermione and Harry in a fury of miserable unself-confidence, and Hermione cries for a week. One of the small supportive subplots in this novel is seeing Hermione and Ron gradually stop needling each other, but it takes so LONG: they are very unforgiving to each other, and Ron is the most obtuse teenage boy I’ve ever encountered. The cold weather doesn’t help at all, since being miserable becomes worse if you’re cold and tired, and without anyone competent to cook for them, they’re not eating properly either. Ron finding a way to come back is the turning point, when things start to go well again, even if ‘things going well’ begins with getting caught by the Dark forces. Clues start popping out all over the place at the Malfoys’ mansion, and the period of information-gathering and planning at Bill and Fleur’s house is a very necessary rest, on pillows and for the emotions. The raid on Gringotts is a terrific set-piece adventure, though rather rushed. Escaping on a dragon is hardly a small thing to do, but somehow its wild excitement gets lost in all the other extraordinary things in this novel. With the return to Hogsmeade, and the Battle of Hogwarts, the novel surges ahead on a roll that just doesn’t stop. Everything has been leading towards these climactic moments and it all works perfectly.

I have one quibble. During th 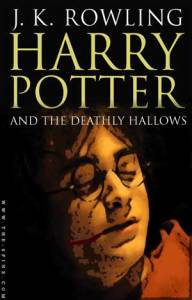 e Battle of Hogwarts I was reminded too strongly of another scene of battle chaos in which centaurs, giants and wand-magic were flashing in a melée of magical creatures and the forces of Christlike sacrificial good (wearing red lion livery) battling a dark leader. C S Lewis’s The Lion, The Witch and the Wardrobe has almost the same scene, though rather less populated with witches and wizards. I thought that although Rowling kept control of this epic scene, she let her language turn medieval for one uncharacteristic moment, as if she couldn’t stop herself writing an epic fantasy battle without sounding like Lewis, and Tolkien, in a passage of sweeping chivalric hyperbole. But that’s the only time I noticed her losing her otherwise impeccable control of her writing. This is a marvellous novel.

For my earlier blogs on the other six Harry Potter novels, search in the box at top right.