Skip to content
Kate 19thC, family saga, fashion history, historical romance, humour, Louisa M Alcott, opera, passion and secrets, the life of the times, the world of work, Why I Really Like This Book January 11, 2016January 11, 2016

Louisa May Alcott’s most famous novel, Little Women, and its three sequels make her still a highly popular author, but until fairly recently these were her only novels that most people could name. Many of her Gothic thrillers and sensational potboilers have been resurrected by scholars, the most well-known of which is a rather depressing adult novel of moral rectitude called Work (1873). The novel that I reread most often – certainly more often than I go back to Little Women – is An Old-Fashioned Girl from 1870. Apparently it was made into a film in 1949, starring nobody that I’ve ever heard of.

It’s a morality tale, it’s the town mouse and the country mouse, it’s a romantic love story with a happy ending and with some satisfactory twists to keep it fresh, and it’s a novel of women’s emancipation in the Gilded Age of America in the late 19th century. It is also a novel that wants its readers – who were originally Victorian teenage girls – to learn about work and the American Victorian way. When I first read it (one of my mother’s Sunday School prizes) I was transfixed by its century-old American slang. For years I was worried what ‘coasting’ meant, because this is not a word for sledging that ever came near my vocabulary. As well as enlarging my vocabulary, the story kept opening out for me as I got older. From being just the story of a family, it became a story of Boston, then of business and making a living, and then of men’s worlds and women’s worlds. Now I read it as a novel of life in a small college town, packed with the names of things I can’t recognise, and with the routines and rhythms of life seen from the domestic perspective.

We don’t see very much of the world of men in this novel. Tom Shaw and Will Milton go to college, and Mr Shaw and Mr Sidney go to their offices. Frank Moore and other nameless young men about town don’t seem to do much of anything, and when Tom isn’t in class, which is most of the time because he’s an easily distracted student, he’s at the club, at balls and parties and at the opera. Sometimes he’s on a horse; he’s usually with a friend or a girl. But all this is on the fringes of the story: the central characters of An Old-Fashioned Girl are his sister Fanny Shaw, and her country friend Polly Milton, who is the old-fashioned girl of the title. The story is of their friendship, their friends and their lives, but above all the novel is about how women work.

The story is full of how work is desirable for a balanced life, and how too much work is bad for a normal life. Working leads to desirable independence, but also does not mix with moving in high society, which does think work at all desirable for ladies. Working and being independent are excellent goals, but achieving them will mean sacrifices. Those who can’t or won’t or don’t work lead useless and fruitless lives (this message seems a bit harsh). To work hard repays the trust of others. Above all other characters in the novel, Polly is a paragon in working for others.

The novel is in two parts: it begins when the girls are aged around 14, and Polly comes from her country home to pay Fanny a month-long visit in Boston. She is unused to city life and fashionable ways, and so we the readers explore the routines of life for rich Bostonians along with Polly. Like Polly we find much to puzzle us, and there is much that is downright inexplicable to 21st-century readers. The episodes in the story are often just bald little morality tales, but they present an unfolding narrative – how Fanny follows her fashionable friends but isn’t as bad as some of them; how Tom is neglected by his father and laughed at by the rest of the family, and so is turning into a lazy dilettante; and how their little sister Maud is constantly demanding and cross because no-one pays her any attention or even plays with her, except Katy the maid.

Where are the rich parents in this obviously dysfunctional family? Mrs Shaw is not, as we might have expected from other Victorian morality tales, always out dancing and neglecting her maternal duties. She’s a hypochondriac, so illness and weakness is her profession, and she stays in bed, or on sofas, demanding attention. She’s a burden, and unlike that other great American sickbed sufferer, Katy Carr in Susan Coolidge’s What Katy Did, she does not make her sickroom the centre of the home for her family. She just sucks attention from others and is needy and weak where Alcott thinks she should be selfless, caring and giving. Mr Shaw works too hard to enjoy and nurture his family, so he is a shadowy authority figure whom Polly has to fuss over when she sees that he’s tired, since his own children are too scared of his autocratic temper. Polly works to bring everyone together throughout the first section of the novel, with upsets and hurt feelings along the way. She isn’t perfect, but she’s very lovable, and her anxiety to learn how to behave properly frames the second half of the novel. 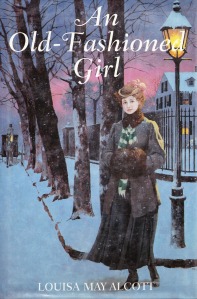 This begins six years later, when Fanny, Tom and Polly are all young adults, and romances are the focus of their lives. Well, not Polly’s life – she is firmly fixed on earning a living as a music teacher, since her family are not rich like the Shaws. Her brother Will can go to college if Polly can earn her own living, so he attends class alongside Tom, or would do if Tom were not so often absent from class. Will refuses to play as hard as Tom, but Polly mothers him. There isn’t much sophisticated fun for these two country mice, but they are perfectly satisfied with cheap concerts and country walks, until Polly starts to break out to have fun and flirtation. Her good intentions and hard work are frustrated when she sees Fanny, and Tom, constantly out on the razzle. Trouble begins when Polly’s innocence, wisdom and beauty attract Fanny’s young man away from Fanny, and away from Tom’s own girlfriends. Fanny is a lovely and kind girl, but society manners dictate that she must be sharp and snappy, and she can be both when Polly starts attracting the attention of the man Fanny loves. Through Polly’s frivolity Alcott seems determined to show her girl readers that a woman earning her own living is making a virtuous sacrifice, but never has fun compared with the lives of the social butterflies. To appreciate the real beauty and value of women working we need to look at a different corner of Boston society.

The antidote to these episodes of lavish dresses and misunderstandings comes when Polly takes Fanny to meet her own friends. She lodges in the house of Miss Mills, who opens her house to the needy and unwanted, and sews for the poor. Polly and Fanny visit a studio shared by Bess the engraver and Becky the sculptor, where they are shown that women’s work is about the representation of truth and beauty. They meet Kate King the authoress – a rather nice self-portrait of Alcott herself – who is worn out by work, and buffeted by the stresses of fame that the unexpected success of one of her novels has brought her.

The novel comes to its climax when Mr Shaw’s business fails, the family moves into a smaller house without servants, and Maud and Fanny have to do all the work of keeping house themselves. Tom goes out West to earn his living with Polly’s older brother, and Polly guides the family through the mysteries of how poor gentlefolk must live. My absolute favourite part of the novel is when Polly shows Fanny how to renovate and make over her worn-out clothes to keep her nicely dressed for the first year of comparative poverty. It’s very rare in Victorian fiction to get such fascinating practical details of how dresses were made and remade, and how their construction allowed the reuse of fabric by turning and retrimming. In due course the pretty dresses and virtuous hard work do their work, marriages take place, and all ends happily.

An Old-Fashioned Girl is a very satisfying novel, with thoroughly enjoyable characters and plot. The moralising is not as intrusive as you might expect, because it is so obviously from the author’s heart and not from a box of standard Victorian precepts shaken out over the story as perfunctory seasoning to taste. Alcott really believed in her message, that working was good and necessary for a healthy and happy life. Nothing to quarrel with there, I think.

This was part of a mini-series in my podcast Why I Really Like This Book, on novels by American women writers about work. Next time, I’m dragged in the wake of a classic American social climber, in Edith Wharton’s magnificent and chilling novel The Custom of the Country, from 1913. Undine Spragg only exists to enjoy herself, which means that she lives off the work of her father, and any man she marries.

5 thoughts on “Working is good for you: Louisa May Alcott’s An Old-Fashioned Girl”