Skip to content
Kate 20thC, Edith Wharton, family saga, fashion history, literary history, oneupmanship, passion and secrets, the life of the times, the world of work, Why I Really Like This Book January 18, 2016

Novels about American women and work, number 2. This Really Like This Book podcast script revisit is about the story of a classic American social climber, Edith Wharton’s magnificent and chilling novel The Custom of the Country, from 1913. I hesitate to call Undine Spragg the heroine, since she is a horrible person, and a monster of ambition and selfishness. But she is undeniably the protagonist in this novel about the invasion of the American upper classes by money, and about the brash new ways of the stock market, of business methods only just on the right side of the law, and of the appalling economic realities of life that drive a man of good family to have to work in an office.

Undine Spragg only exists to enjoy herself, which means that she lives off the work of her father, and the men she marries. And my goodness, she marries. Serial marriage is quite usual behaviour where she comes from, the invented town of Apex, somewhere in the mid-West, and her ideas about the rightness of Apex morality clash resolutely with the refined ways  of old money New York and the French aristocracy. Undine’s problem is that she doesn’t realise that divorce is a disgrace, and spells the end of social life for any decent woman in those societies into which she eventually marries. She can’t see the difficulty in divorcing a difficult or disappointing husband to make a better deal for herself elsewhere. She certainly won’t become anyone’s mistress, which would be the French solution, unless there is no alternative. The problem for the upper class New York Marvell family, and of the family of the Marquis de Chelles, into which she does marry, is that Undine refuses to consider anyone’s needs as more important than her own, and she needs money, all the time. She resents economy as a personal insult, and cannot understand why her husband will not sell the tapestries given to his ancestor by the King, when she needs money for a season in Paris. 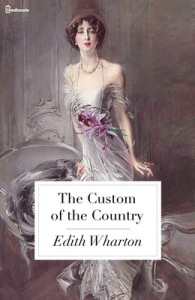 Undine works so hard in this novel, but not with her hands. She is learning all the time, but her tragedy is that almost until the end of her story (which ends triumphantly for her) she is only able to learn what she thinks she needs to know, and she cannot see beyond her own needs. Her reason for learning new ways of behaving is to enter fashionable society, and she must work at breaking into successive layers of society by understanding their values and adapting her own to match. She works to learn the rules constantly, and then follows them skilfully, shedding her old self to fit in. But her way is so plodding, she cannot see beyond the next step because she is simply incapable of thinking beyond her own situation.

In Apex she gets into a spot of bother from which her father’s money rescues her, and decides she has to leave town. She’s already sampled life out of town by dragging her parents to hotels, further and further east, but nothing came of these summer trips except an increasing awareness of how little there was for her in Apex, and how much there was waiting for her in New York. So the Spragg family go to New York, and for two years Undine and her mother work hard hanging around on the fringes of New York society as seen in the illustrated magazines, which is their only frame of reference.

At last there is a breakthrough: Undine meets Ralph Marvell at a party, and his sister writes to Mrs Spragg the next day asking if Undine may be allowed to come to dinner. Undine thinks this is bizarre: why should her mother have any say in where she goes and who she meets? Again, she simply doesn’t know about refined New York ideas about a girl being protected and in chaperonage until marriage. Her Apex behaviour is considered vulgar and too free in New York: her required New York manners would be considered ridiculously old-fashioned and prim in Apex. In so many ways, this is a novel of two worlds colliding. At the dinner Undine encounters more peculiar behaviour: she is asked what pictures she has seen or which books she read, and she has no idea why this should be worth talking about. Her remarks about divorce cause an unexpected hush, and Undine goes home having learned a bit more about the half-lights and half-tones by which Ralph’s world is illuminated. She also learns that the really smart people, so she thinks, rent a box at the opera. She tells her father to rent one for her, and he overdoes things and rents one for the whole season, because nothing is too good for his Undine, and anything is worth doing to keep that look of stormy aggression off her face  when she hasn’t got her own way. Marooned in the box, where Undine looks at her best, Ralph comes to see her, and she is very willing to be rescued by a real gentleman from the déclassé hotel society that she now realises is beneath her. They marry, and her social climbing begins: working incessantly to learn the custom of each new country, or social level, that she wants to invade.

I feel for the men in this novel because they earn all the money, working hard for no thanks, and all struggle to supply Undine’s wants. She has not married wisely in Ralph, because although his family is old and distinguished, he is poor and not at all cut out for working in an office, though he does this diligently and not very effectively after their marriage. Undine is bored by him, and longs only for parties and balls. She spends his income and her father’s allowance as fast as it can be earned. Her father is forced to take risky extremes on the stock market on her behalf. Half a book later, her second husband, the Marquis de Chelles, refuses to allow her to sell his tapestries but she lets a buyer know when he is forced to put them on the market, and they end up in her own ballroom. The only man she can’t take money from is her son Paul, but she even gets around that, when Paul’s inheritance from his father is calmly spent by Undine on her own amusements. 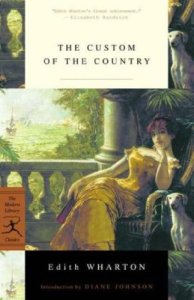 Undine’s rise in society, and also her inability to learn unaided and her lack of any sense of things greater than herself, are rather caustic symbols of the new rich in American society at the turn of the century. Edith Wharton’s own family was old rich, and even though she herself divorced, had a lover, and lived a raffish life in Paris, far away from Washington Square, she writes about the American old rich with as much pride and affection as she describes Undine and her risqué friends with loathing. These are not simply pictures in black and white. Wharton is critical of how the old rich fail to adapt when they ought to fight the invaders. The aristocratic Ralph Marvell is a lovely man, but he is useless in the new world of Undine and her father, and never even realises, until the very last days of his life, how closely the shadowy moneyman and risk-taker Elmer Moffatt is linked to Undine’s past. The hotel society of the new rich invaders may be a little vulgar, but they have life, energy, imagination, aesthetic appreciation for new forms of art, and give employment to thousands making commodities for them to buy, even if they don’t always pay very quickly. Undine is also a lovely thing: she knows how to dress, and how to be delightful, charming, beautiful and fun. She is a callous and uninterested mother, but my word she can throw terrific parties. Her philistinism, as an ignorant American lost in Europe, somehow doesn’t matter, because she is a work of art in herself, and her life’s work is presenting her perfect self for the highest bidder. But she makes mistakes in her job. She runs away with her next lover on the day she gets a telegram saying that her husband is dangerously ill, which is enough for the lover to decide not to stay with her, since his turn might also come to be abandoned.

Once she’s left adrift in France and exposed to a different way of doing things than in stuffy old New York, Undine learns to capitalise her assets. These are her beauty, her youth, her virtue (which she plays impeccably while reeling the Marquis in), and finally her son, whom she has long abandoned with his father. Once she is a widow, and magically suitable for marriage into the Roman Catholic aristocracy, when a day before she had only been a divorced woman with a husband still living, her son becomes a valuable prop for the new-look Undine: gently sad in mourning and in need of a good Marquis for consolation.

Of all her activities in this story, Undine’s passion for working her world dominates the action. We learn with her how things are done, and much of the time we wince as Undine fails to realise her errors, or only just saves herself from making hideous mistakes by her increasingly wary sense of self-preservation. Social class, good breeding, social manners and constant vigilance are desperately important in this novel. Undine’s work is to learn to pretend she knows them all intimately, and she very nearly gets it all right. But ultimately, she is the epitome of selfishness, as seen when she throws a tantrum in Paris. All her fittings for her first Paris wardrobe are useless and the fortune spent on her dresses for her next season will be wasted: she is pregnant. That’s one aspect of her job that she cannot get out of, or avoid.

Next time, I wallow in Willa Cather’s beautiful classic The Song of the Lark from 1915.

2 thoughts on “Edith Wharton and The Custom of the Country”