This time on the Really Like This Book’s podcast scripts catch-up, I’m in very rural modern America, enjoying Barbara Kingsolver’s Prodigal Summer, where women are coyotes caring for their young, and a widowed scientist finds a new way to keep the family farm running. This novel is so intensely involving that, the first time I read it, I was up until 3am, sitting in the courtyard of a Spanish holiday cottage, desperately trying to finish the novel before I got eaten alive by night insects. On a more recent rereading, I couldn’t even stop to make lunch until I reached the end. This story engulfs the reader.

It’s about the lives of four people living all quite near each other, in a small Virginia mountain valley and on the mountain itself. We’ll start with Lusa: she lives on a farm where tobacco is the only crop that will grow reliably and store without rotting while waiting for the market’s best prices. Everything else in modern farming is a gamble, and farming is a hand to mouth business. Lusa arrives in this world of long-established families and rigid traditions as the new wife of a young farmer, with her foreign Polish-Jewish-Palestinian background and her fancy scientific knowledge about bugs. Everyone except Lusa knows that bugs are for squashing, so Lusa’s interests don’t seem to work well with farming. She spends the novel learning how to make the best of the family farm, and how to handle the extended family that she inherits with the land and the farmhouse. This family brings a lot of baggage with it, but one or two of them like Lusa, and she likes them. Her journey of learning and integration is a triumphant biology lesson, and is a joy to read. 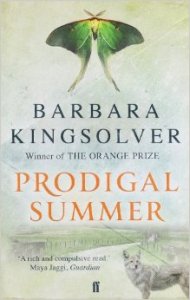 Then we have Deanna, a local girl turned forest ranger, who lives in a cabin on Zebulon mountainside keeping an eye on the local animal and bird populations, and clearing the trails when the trees fall down. Her passion is coyotes, and the importance of predators in the ecosystem, because without predators, the population explosion of animals lower down the chain will ruin their own ecosystems and cause a lot of trouble for everyone, animal and human. She thinks that a family of coyotes has arrived on the mountain and is breeding, and she can hardly bear to leave their den alone, but she knows that local farmers shoot coyotes, and if she lets anyone know the family’s whereabouts, they’re doomed. Then one day she meets Eddie Bondo on the trail, a hunter from Wyoming who’s after coyotes. Trouble is, he and Deanna can hardly keep their hands off each other, and when they’re not in bed, or in a hollow log, or on her cabin floor, her work is cut out educating him in her view of ecology, as well as the daily work of being a ranger. Deanna is the lone wolf in the novel, because she acts and lives alone, and guards her own territory instinctively. Her physicality defines her character, superbly written to the same pattern as the lives of the coyotes she’s protecting

These two very smart, college-educated women are living in close proximity – Deanna can see Lusa’s farm boundaries from the edge of her mountainside – but they don’t know each other, even though they share the same views about life and animals. This is frustrating, but the novel proceeds inexorably, moving back and forth from Deanna’s storyline to Lusa’s, at the same time weaving in the stories of the third and fourth characters, so we feel that sooner or later they’re going to meet up. We just have to be patient. 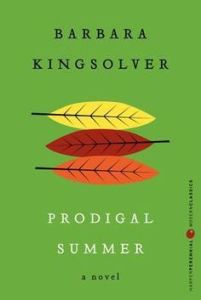 Mr Garnett Walker III, and his irritating, maddening know-all neighbour, Miss Nannie Rawley, are the other lead characters. Mr Walker is a widower, nearly 80, has trouble with cataracts and his heart, and suffers from the horrible ear vertigo that cripples him if he moves his head the wrong way. He is a creationist, but also, bizarrely, a retired biology teacher and the local advisor about plant breeding and goats. He has stern and rigid views about the rightness of spraying pesticides, and the wrongness of leaving roadside verges to fill up with weeds. He is a stubborn old man and if it weren’t for the fact that we can see through his muttered thoughts so easily, he’d be very annoying. But he’s not: he’s lovable because he’s so transparent and honest. Nannie Rawley is 75, and a fierce advocate of organic farming. She grows apples and fine vegetables, and sells them in the organic market in town, and to organic apple juice makers. Garnett Walker objects to her because she doesn’t act like his idea of how a 75 yr old woman should act, especially the way she wears cut-off jeans and sleeveless shirts, and chats to men as if she were only thirty. I think we can see what’s up with Mr Walker: a simple case of frustrated jealousy. Her misdemeanours are all tied up with his grumbles about Unitarian women in trousers, and townsfolk who don’t listen to good advice. What an old grump. But what a lonely and failing old grump he is too: he can’t cook for himself, he’s clearly unsafe to drive, and he mistakes a snapping turtle fixed to the end of his boot with having a stroke. Nannie needs to take him in hand.

The women in this novel work so hard. Mostly, they work with the land, with farming and growing and harvesting and nurturing and keeping the land and its creatures safe for the next generations. They also educate. Lusa couldn’t educate her husband Cole before he died, even though he started out as her student. But she finds herself educating Rickie, her nephew-by-marriage, a rather gorgeous 17 year old farmboy with hormones between his ears. She doesn’t educate him in the way you, and he, might think. Kingsolver is too intelligent a writer, and this novel is too interesting, to let the story run in that direction. Lusa shows Rickie how to work on plants with tools rather than pesticides, and how to invent a new way to farm useless land when even tobacco won’t make money. She takes on another new family member, her niece Crys, whose mother is dying of cancer, and whom nobody understands or cares for at all. But Crys is a natural naturalist, so Lusa and she are a perfect fit. Deanna educates Eddie Bondo in how mountain habitats work and how the animals coexist. And Nannie educates Mr Walker, and almost persuades him, that her ways of farming might have a point. She does remind him that being a good neighbour is a skill anyone can remember. 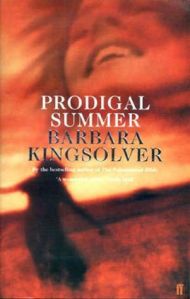 The characters are all tangled up in relationships to each other. Deanna’s father and Nannie Rawley had a baby with Downs’ Syndrome together, so Nannie is Deanna’s step-mother by any other name. Lusa’s niece Crys and her little brother are the grandchildren of Mr Walker, whom he hasn’t seen since he cut off contact with his useless and feckless son. The novel begins with all four characters lacking children, and by the end, all four have gained children, or adopted children, or grand-children. It’s a nice additional example of nature taking its course.

You do need to like reading about nature to enjoy this book. Kingsolver is and was a scientist, so she has science oozing out of her prose. Her essay collections, High Tide in Tucson and Small Wonder, contain excellent science writing for non-scientists. She knows how to educate painlessly and she’s patient and unobtrusive. My favourite parts of Prodigal Summer are the different ways human animals give gifts and pay attention to each other as a precursor of mating behaviour: when you see a Fourth of July barbecue through a biologist’s eyes, it all looks different. I also love reading about Lusa’s secret plan to make the farm pay using a solution that only she, a Jewish-Muslim woman long used to cooking at family feasts, could dream up.

The problem, if there is one, with this novel, is the sheer volume of science education that it contains. When a novel has one protagonist, that character won’t repeat themselves in what they say without good reason from the novelist. But with four protagonists, all determined to teach some other character important or fascinating knowledge about luna moths or phoebe birds or goat breeding or snakes or apples, we get a cacophony of natural history made easy, again and again and again. The human interactions are also focused on animal rituals and routines: not just mating, but bringing up young, foraging for food, maintaining a home, hunting and protecting: it’s all in this book. If you like being immersed in biology while being entranced by lots of different stories about people all at once, this tremendous novel is for you.

[When researching the photos, I found that Nicole Kassall was developing Prodigal Summer with Kingsolver as a film, but the project seemed to have stalled around 2016. Pity. Laura Dern as Deanna would have been amazing.]