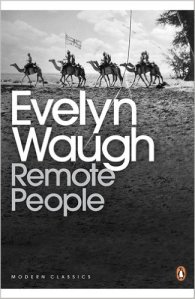 This short account of Evelyn Waugh’s travels in East and West Africa in 1930 is advertised in its new Penguin Modern Classics edition as ‘perhaps the funniest travel book ever written’. The ‘perhaps’ is well placed, because ‘funny’ is a matter of taste, ‘perhaps’ the taste of one who finds colonialism, racism and British Establishment expectations from the interwar years to be rip-roaringly jolly. I have read a great deal of reactionary writing for work purposes, and consider myself reasonably inured to its extremes. I do admire Waugh very much as a stylist and for his spectacularly good satirical imagination. Brideshead Revisited (1945) is a genuine classic, one of the great novels of the twentieth century, and I love Scoop (1938), The Ordeal of Gilbert Pinfold (1957) and Helena (1950), his snarky biography of the mother of the Emperor Constantine. His 1950s novels of the Second World War express the sadness and disillusionment of society at war with compassion as well as loathing. He’s a great writer, no question. But he is also an unkind bully and a vicious commentator on anything he disapproved of or disagreed with. Taking all that on board, what can we make of Remote People?

The first thing to recall is that – as he says in the section so engagingly titled ‘Second Nightmare’ – he wrote the first few chapters of Remote People to stave off boredom by the ‘desperate expedient of writing’, in a cabin in the Prince Leopold, sailing down the Congo River unwillingly in company with a Seventh Day Adventist (Waugh the recently converted Roman Catholic finds this belief system so ludicrous that he makes it the man’s entire identity). Waugh was travelling through central Africa after his posting to Abyssinia to report on the coronation of Haile Selassie. He was bored nearly everywhere, though to do him justice he also found a great deal of interest in unexpected places and people. His descriptions of the preparations for the coronation, and all the ways it differed from his expectations, are certainly absorbing to read. I found myself counting the disparaging references that rely on the reader’s prior knowledge of the anthropology of upper-class English tribal practices.

The second thing to recall is that Waugh was writing as a man of his class, of his upbringing and of his political orientation. He was not interested in Africa as a place with its own values, only as a place that had been appropriately conquered by white people but was now run very badly. He refers to animals seen from his train or car not as ‘wildlife’, or even by their species names, but as ‘game’, indicating that their proper purpose is to be shot as entertainment. Waugh’s defence of the ‘Happy Valley’ set in Kenya is an extended apologia for the rights of colonialism that should be set reading for any class in post-colonial studies, to show the colonial perspective.

Remote People, is, as you might have gathered, quite a bracing book if you flinch at British 1930s attitudes to people in Africa who were not white. Waugh finds many of the people he meets quite pleasant, but there is no doubt that all foreigners are regarded with a raised eyebrow and a firm belief in his own, British, superiority. On his arrival at Addis Abbaba Waugh is stuck for accommodation, since the city is overrun with journalists and dignitaries of all nations, but he is rescued by a vision at the entrance to the Hotel de France: ‘the supremely Western figure of Irene Ravensdale in riding habit’. It is not explained who this lady is, but on researching her one finds that she was a hereditary peeress, a socialite and a former lover of Oswald Mosely (her future brother-in-law), going on to be a notable figure in charitable work and politics. She represents everything in Waugh’s world that was right and proper, signifying his value system for the whole of the book.

I imagine that Waugh wrote Remote People partly for the money, and partly because at this stage in his career, what he wrote, he published. It’s a uncomfortably personal response to countries and people in which he had no interest and found disappointing, but when was Waugh ever not personal in his writing? The very few events that he admits to enjoying depend on romping, riotous living, for example invading a wedding party or a brothel to cause a fuss and make a noise. He also enjoyed the relief of sybaritic standards, and with reason, since he does seem to have endured the rigours of travel for quite a long time. His visit to Mr Leblanc in Aden was ‘particularly emollient and healing’ because it was an oasis of white society, white waistcoats, new gramophone records, and a delicious dinner with iced vin rosé. His visit to the Kenyan coffee-planting circles occurred during their racing season, which he describes in a brilliant vignette of partying that could have taken place in Mayfair, so strongly does he long for his own friends and habitat. He mentions things largely to complain about them, or to note that they were ‘uneventful’. He finds beauty and value only when it comes near to things he will find at ‘home’. This is not funny: it is desperately sad. The very last section, the ‘Third Nightmare’, is an ironic portrait of his first night out in London on his return, which he finds ‘hotter than Zanzibar, noisier than the markets at Harar, more reckless of the decencies of hospitality than the taverns of Kabalo or Tabora’ (all of which he has told us are vile). The man is a misanthrope, and nothing will satisfy him.