This remarkable compendium of the history of British radical communities is colourful inside and out: the typefaces change depending on the category of the text (commentary, quotation, reportage), and the stories are astonishingly addictive. ‘Just one more’, as, oblivious to the cold room or the early start next morning, you keep reading past midnight yet one more of these stories of the Utopian dreams of the British.

The publisher, Diggers and Dreamers, is a long-running network of British co-housing communities, which publishes directories and histories as well as community living guidance and inspiration. Utopia Brittanica shows the remarkable amount of dissent and independent thinking running through the history of the British people. It includes ample evidence of the dismaying gullibility of the British for religious sects founded on exploring socially-outlawed sexual practices. (The 19th-century Abode of Love in Spaxton made the rape of virgins a devotional, purifying act.) Islands of socialism across time populated by artistic visionaries show that the New Age was reinvented in practically every century since the fourteenth.

I was amazed by how these communities and forgotten movements connected together. Joanna Southcott (she who famously did not give birth to rabbits) would lead onto early socialism; the poet Southey would lead to the poet Coleridge. The Scrooby Separatists turned into, or were sanitised and rebranded as the Mayflower Pilgrims. The 17th-century Ranters and Diggers worked out the structures of British socialism two centuries before the next attempt. Friendly windmills (as in, windmill cooperatives operated by the early Quakers) led to socialist turnips.

British utopian ideas spread overseas as well. The successful anarchist state of Pitcairn Island established female suffrage in 1838, on the initiative of the descendants of the settlers from the Bounty in 1814, and from the good sense of Captain Elliott of the visiting British Navy, whom they asked to draw up the island’s constitution. Radical ideas also spread back to Britain: William Wordsworth was at school with the Bounty’s Fletcher Christian, who may have been the original Ancient Mariner. The inhabitants of Tristan da Cunha were evacuated in 1961 due to volcanic explosion, but returned two years later, unable to bear the rigours of unUtopian English life.

Printing was vital to radical movements, since without this none of the radicals’ ideas could have been spread, nor could the expression of their ideals as art have become widely known. Ruskin’s Guild of St George, the Cotswolds Cooperative Handcrafts, the Artists’ Rifles and the Welsh Academy were all idealistic communities predicated on art. For Augustus John and Eric Gill, copious sexual activity within their particular circles was as important an expression of their vision of the ideal of living as their artistic activities.

The history of communitarian living is strangely littered with the good, the mad and the fraudulent. Theosophy, the Kibbo Kift, the Gore Kinship, Q Camps and the still-influential institution of the Camphill Schools, were all connected by belief systems from the occult to eugenicism, to public health and curative education. The combination of architectural vision and town planning on a human scale related the Garden City movement to the Settlements in the East End: it was all about making life better for everyone, not just the rich and landed. 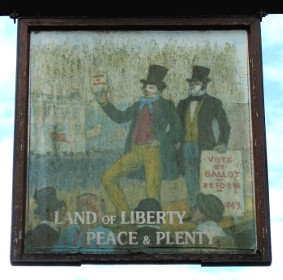 There was plenty of opposition to attempts by the people to establish independent living. The Chartist estate and land colony of O’Connorville was brought down by political sabotage from those who feared its success in making the working classes independent of capitalism. Community living is easily derided, and often mocked, yet it continues, quietly and purposefully. Utopia Britannica is a marvellously uplifting history of stubborn independent thinking about how the roof over one’s head can be the best roof for everyone.

One thought on “A history of British utopian living: Utopia Britannica”