Skip to content
Kate 20thC, detective, Dorothy L Sayers, Josephine Tey, middlebrow, passion and secrets, political / social commentary, the life of the times, thriller, wartime, Why I Really Like This Book May 2, 2016May 1, 2016 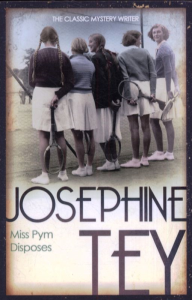 This week on the Really Like This Book‘s podcast scripts catch-up I am urging you to read Josephine Tey’s Miss Pym Disposes. Tey (her real name was Elizabeth MacKintosh) is, I maintain, a better writer than any of her Golden Age detective novelist colleagues. She chose to focus on the detective novel format, but she was also an acclaimed playwright in the 1930s and 1940s: she really knew how to write, and how to construct a plot. She was also a fine writer of character. All her novels work on you as soon as you begin them, because the characters lead you in and pull you along: you simply have to know what’s going to happen to them. She wrote a short series of traditional English police procedural novels, with the brilliant, tormented Inspector Alan Grant and his devoted sergeant, but she also wrote three spectacularly good non-police novels, where a detection situation is presented, but the characters and the reader work through to the solution unaided by the Law. Miss Pym Disposes (1946) has a psychologist as the focalising protagonist, so much better as a leading character than a boring policeman, because she relies completely on gut instinct, human psychology and observation to make her deductions. Miss Marple did that too, of course, but Agatha Christie is nowhere near as good a writer as Josephine Tey. Miss Marple also can’t compete with Miss Pym’s  high heels, silk dresses, lipstick, her interest in the elegancies of life, and in the importance of good food.

The novel begins when Miss Pym woke up one morning to find herself famous, and a bestselling pundit, because she had written a highly successful book on psychology. Like all good ground-breaking books, this one came about because she found psychology interesting but was infuriated by the nonsense written about it, so she read everything she could, and then wrote her own book. Thus we know at the start of this novel that Miss Pym is absolutely to be trusted on psychology, and no amount of self-doubt throughout the story to follow can shake our confidence in her judgement. Her fame leads to invitations to give talks, and she is invited by an old school-friend to talk to her students at a very respectable physical training college.

We’re in the mid-1940s, but there is curiously almost no mention of the war: only one brief sighting of a tank convoy near the end of the story. The social effects of the war can be seen in the calm assumption by these very competent young women that they would of course have a career in teaching or the clinical therapies. They are 1940s women, not girls of the 1930s, and many of them seem as mature as if they had already served in the forces. Another odd thing about the novel’s post-war setting is that rationing – an inescapable fact of life in the UK until the 1950s  – is never mentioned, which is simply bizarre for a novel of this date and composition, unless it is to be considered as a fantasy, where meals of any size and composition can be had for the asking at any time, and no character ever thinks of points or ration books. In contrast, the plot contains the social norm of the period that if one of these students gets married, she obviously won’t continue to work. Not that any of them do want to get married: I’ve never come across such a dedicated group of female professionals in a novel of this period. Their instructors are all experts in their field, impressively high-achieving unmarried individuals. The headmistress of the school – Miss Pym’s old school-friend – is also unmarried, and is also the only one who shows anything remotely like bad judgement, on one occasion only. As a result of that bad judgement murder is committed.

To avoid spoilers I shall concentrate on why this novel is gripping and unputdowneable, and the kind of detective novel that you skim through again once you’ve finished it, looking for the things you missed that make the final revelation such a surprise. Our instincts and human psychology are used against us expertly by Tey, just like Miss Pym. She knows, for example, that once we are shown a sympathetic side to a character, or given a very good reason to long for that character to turn out all right in the end, we find it increasingly difficult to consider that that character might be a murder suspect. She takes advantage of our mental discomfort to lay clues and present us with red herrings that will make us miss things that we might interpret otherwise, were we not so engaged emotionally. Contrariwise, we are presented with a highly unsympathetic character who is later injured, and it is a bit of a shock for us to realise that we are actually glad that Miss Unsympathetic has been removed from the action, has received a comeuppance, and been tidied out of the way. The death of Miss Unsympathetic complicates this feeling: the fact of death is reintroduced here as a physical shock. This is a genre in which we normally wait for a death to occur with impatience, rather like waiting for the lions to finish their meal, so we can get on with the detecting. This death is not expected, it is a surprise and a nasty event, because it makes everyone present no longer perfect and deserving, and cranks up the tension when we don’t think we can bear any more, thank you. 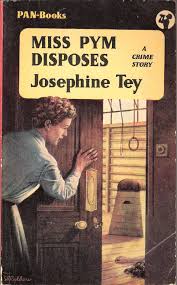 The novel is almost completely female. There are four male characters with a role in the story, and these are very small roles indeed, as fathers or suitors to the much more important female students and teachers. It’s rather refreshing to realise, once the novel is finished, that the story needed no male authority, no representative of established law or order to bring resolution to the hideous disorder that the story describes. Tey’s strength in writing characters has carried the story so effortlessly to its ending that we simply don’t notice that one sex has been mostly dispensed with, even though the men do play their social roles. We are reminded of Tey’s theatrical background when we meet her outrageously vain ageing actor – let’s assume she was caricaturing Laurence Olivier –  who thinks that the girls at the college have extraordinarily good manners because none of them has asked him for his autograph. He doesn’t realise that they have no idea who is, and don’t much care either, because he is not of their world, and certainly not of their generation. The most entertaining character is a student fondly called the Nut Tart, because she is glamorous, exotic, Brazilian, beautiful, good-natured, and a spectacularly good dancer, and worldly beyond the formal, upper-class English custom of the college. She has no English restraint, especially not with (inexplicably unrationed) food, and is a mouthpiece for views about the college that the reader needs to hear from an insider, but not from someone with English self-restraint, or with English college loyalties.

There’s a lot to be learned about the different attitudes to college, to class, and to the communal group by comparing this novel with Dorothy L Sayers’ Gaudy Night, published only about six years earlier. Gaudy Night  is also about a murder in a women’s college, but with a completely different perspective on the important factors at play. Sayers focuses on sexual roles and sexual jealousy throughout her novel, whereas Tey looks briefly at sex and then goes on to consider more interesting factors in how humans, specifically women, function. Tey’s restraint has the effect of making Sayers feel like an sex-crazed obsessive, which is interesting given that Sayers is usually considered to be the cerebral intellectual of the women detective novelists of this period.  Miss Pym, like a classic Golden Age detective, has self-doubt, is diffident, reviews her facts with caution and assumes too often that she must be mistaken, but all the way through she has seen the right clue at the right time, and comes to the right conclusions, even if we don’t actually recognise those conclusions until too late.

This novel is simply so good. It is a perfect orchestration of tension and moral signifiers in a woman’s world, where the code of honour at play is reassuringly almost Edwardian, and the traps for the reader are invisible. It’s impeccably constructed, and irresistibly told.