I don’t know Ian Sales, but for about a year I’ve been sending him some of my posts about female-authored sf for him to repost in his sfmistressworks site. Then suddenly, out of the blue, he blurts out on Twitter that the fourth of his Apollo Quartet novels is in the 2015 Tiptree Award Honor List. (1) I had no idea he’d even published novels. (2) This review is not log-rolling, this is a ‘you WHAT?’ moment that required investigation.

All That Outer Space Allows is self-published by Whippleshield Books, Sales’ own imprint. It is beautifully designed and produced, which is greatly reassuring, because, believe me, I have seen too much dreadful self-published cover art on novels sent to me for consideration. It is not shallow to ask for a decent and relevant image on the cover, it is simply an expectation that the book will be designed with the same care that the words have been chosen. If you have complete control over your book’s production values, then rubbish cover = rubbish novel. Overall design family for linked novels = an indication of high quality writing (though never a guarantee). All That Outer Space Allows was such a good read that I ordered books 2 and 3, now waiting to be read, and reviewed in due course. Sales did tell me that the novels are intended to be standalone fictions, so I’m curious as to why they are also part of a soi-disant Quartet.

All That Outer Space Allows is set in 1960s America, where Air Force wives live for their test pilot husbands, hoping that one day their men will be selected for astronaut training and, eventually, space flight. Ginny is married to Walden, they have no children, and she is about to become a dutiful but rather distant member of the Astronaut Wives Club. She is very careful to look after Walden as he requires, rising at 5am to cook his breakfast (he’s agreed that she doesn’t need to get dressed and made-up for this, though other wives will see this as simply part of their job), making sure the house is tidy, his shirts are pressed, the drinks are in the cupboard when needed, and that his meals are delicious. She socialises with the other Air Force wives as much as she’s required to, and is careful to keep this up for her own sake as well as for community cohesion. She is generous to share her car for community errands, and does favours for the other women when she can. She’s a nice person, she wants to be part of this group, but she’s not very enthusiastic about being a new member of the Astronaut Wives Club. She has other things in her life that she’d rather be doing.

Ginny is also V G Parker, the intriguing new contributor of eleven short stories in sf magazines. Her stories are popular and usually snapped up without hesitation by her editors, and she has every intention of developing her stories, but when Walden finally makes it to astronaut training, Ginny has to put her writing on hold. She has to arrange the move, pack up the house, drive solo three thousand miles across the United States, set up home in the rented apartment, arrange the design and building of their new home, move in, unpack, set up new social networks and finally make herself look the part with new dresses and make-up. There’s no time for her typewriter to even be taken out of her cupboard.

When she does find a day with no other duties, she’s preoccupied with curiosity about space flight and Walden’s training. She reads his manuals from his desk when he’s out at work, and pushes herself to learn the technical jargon and science of his new profession. When she makes a surprise visit to Cape Canaveral, alarmed by rumours that all the astronauts are having flings there, she is satisfied that he’s delighted to see her, but he’s not so satisfied in her interest in seeing over a space capsule. She can now start writing again, to repopulate space with women. 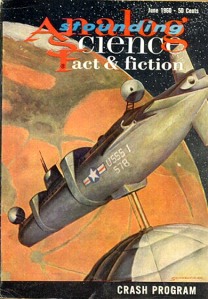 Sales inserts the fictional Ginny into the real literary history of sf publishing in the mid-1960s. All her fellow authors that she writes to are real: ‘Ursula’, ‘Ali’ (though this is unlikely, since Alice Sheldon didn’t unmask herself until the 1970s, as we know), ‘Joanna’ and ‘Vonda’. She’s close to real-life women sf editors, and she’s friendly with real-life astronauts and their wives. This is a nearly seamless reworking of history, retelling the stories of life as a military appendage that Sales has recovered from the mini-industry of autobiographies from the Space Age. Ginny is a vehicle for Sales to explore new areas that the biographies don’t touch: what if a wife wanted to do something different? What if a wife had a parallel career? What if women were taken seriously in the air force and in the NASA programmes as contributing individuals rather than just housekeepers and bed-warmers?

Sales burrows into the psychology and sociology of the astronauts’ cadre to give an under-the-table view of life as it probably was, but could not be written about in that day and age. By contextualising the space program with sf as a literary discourse of its period, we get a strong sense of how some people were enthralled by the human drama and the history of the endeavour, and others wanted to read about the possibilities that space flight represented. These were not necessarily the same constituency, as we see in Walden, the would-be astronaut who barely knows that fiction exists. By focusing on the women’s lives, Sales is giving the female experience a stronger representation than we would normally see in this period. He doesn’t get it completely, of course. Ginny displays superhuman endurance for her social and marital trials, and is curiously passive throughout the years of her marriage, for all the private relief that her writing gives her. I would truly not have been surprised to have found that she was an android in some parallel universe version of the 1960s. Nonetheless, this is such a good novel, about women’s private lives, about life in the Astronaut Wives Club, and about writing sf in the age when it was all about to come true.