This week on the Really Like This Book’s podcast scripts catch-up I’m looking at a total classic, E M Delafield’s The Diary of a Provincial Lady. * This great comic novel from 1930 has never been out of print, and is the quintessential British women’s middlebrow novel from the 1930s. Yet, I’m not sure that many people know about it. Until a few years ago it was hard to find in bookshops, because it wasn’t reprinted often enough to count as a ‘new’ book by those who buy bookshop stock. You might find it in vintage or nostalgia displays, and you would find it in comedy if the shelf were big enough. But otherwise you’d have to order it specially, knowing what you were looking for rather than tripping up over it by accident. Not so nowadays: we have a plethora of reprints.

The Diary is purportedly narrated by a rather scatty lady who lives in the country. She calls herself a Provincial Lady because she lives in a house grand enough to have servants, in a village, not in London. She doesn’t have a name, but we are plunged into her life so quickly, rapidly meeting her silent husband, Robert, her delightful six-year old daughter Vicky and Vicky’s French governess Mademoiselle, that we feel we are the intimate friends of this narrator from the bottom of the first page. Later on, we meet her son Robin, who must be about 10, and a new kitten, and Cook and Ethel, the servants. Neighbours pop in and out, and she goes on visits and holidays, but seems to spend all her time coping with daily trials and errors.

They are not a rich family – despite having servants – because Robert is an Agent to a county family, meaning that he is employed to manage their land and buildings, tenants, and their house comes with the job. Socially, the Agent’s family would come from the same strata of society as the owners, or perhaps a little lower, in this period, but by needing to work, they would not have a lot of spare cash. The Provincial Lady is constantly running short on the housekeeping money, and in her own bank account, and never has enough to pay the Rates. She regularly goes to the nearest city to pawn her great-aunt’s diamond ring, her one good piece of jewellery, to cope with cash flow issues. When Robert telephones her one morning to say that he has unexpectedly inherited £500, the Provincial Lady has already spent it in her head twice over before he gets back from work.

So why is this book a comic classic, a treasure of pure English wit? There are several reasons, the most immediately obvious being Delafield’s writing style. The story is told as a diary, in rushed and truncated terse little entries, voluble and elaborate, but also short and sharp. She compresses the language, keeping essential verbs and nouns but abandoning pronouns. All dialogue is faithfully repeated, so we get the essence of all the characters, either in their direct speech, or in reported speech of characters that reveals all their most private thoughts for our amusement. But the style would be sawdust if it were not for the delight of the Provincial Lady’s character. She is charming. She’s rushed, determined, scatty, distracted, organised (sometimes) and easily swayed into foolishness and embarrassment. Embarrassment is her greatest charm – who could not feel warmly towards someone who is constantly saying the wrong thing, and realising it a shade too late? Or, having her handbag crash open on the floor as she is leaving a dinner party to which she has been invited by a friend of a friend, ie someone she doesn’t know very well, to observe that the sugar lumps she has sneaked into her bag for her small daughter are now scattered all over the floor, making the interested other guests assume that she has a kleptomaniac sweet tooth, unsuitable for someone of her age, social position and class? 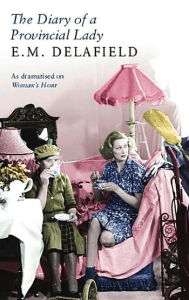 The Provincial Lady is adorable. She has excellent intentions in standing up to Lady Boxe, Robert’s employer (we assume), but Lady Boxe is the kind of person who always has the last word. This formidable figure of social tyranny is a magnificently haughty grande dame, who is always right. The Provincial Lady is very good at thinking up good rebuttals, and ripostes to Lady Boxe’s annihilating remarks, but she never has them to hand when she needs them. Yet the Provincial Lady is determined to win, somehow, over social oppression. She plants winter bulbs for indoor flowering, and leaves them on the living-room chair that Lady Boxe wishes to sit in. Lady Boxe notes that the bulbs will never come up in that warmth, so down they go to the dark and cool of the cellar. Some weeks later, the Provincial Lady changes her mind and moves the bulbs to the attic, where it is a bit warmer, and forgets they are there on a later visit, and trips over the bowls. After Christmas, when the bowls are pathetically laid out, hoping to bloom overnight, a visitor remarks that surely she never expected to have those bulbs in bloom by now. The PL is always hopeful, never forgets a chance to try and reassert some good in her, some indication that she can do something right.

Lady Boxe also makes crashing assumptions about the Provincial Lady’s politics and social allegiances, and raises her eyebrows in surprise when the Provincial Lady says that she will not be able to help at the garden party for The Party, which is, of course, the Conservative Party. This I find fascinating, since I compare Delafield to her contemporary, and commercial rival, Angela Thirkell, for whom there was no other party but the Conservative Party, and for whom it would have been unthinkable to have had a positive depiction of a character who did not support it. Delafield’s politics are more egalitarian, but she is undeniably county in lifestyle, even if she is a Liberal, or possibly (dare we think it?) a Labour Party supporter?

When not being crushed by Lady Boxe, the Provincial Lady does have social standing in the village. She is routinely forced to chair the Women’s Institute Meetings, because she is malleable, has the right social class to be an acceptable leader of the village women, and can also, we see, be ridden over roughshod if someone else disagrees with her. She is appealed to for help, advice, support and gossip by the Vicar’s Wife, a perfectly nice woman who keeps saying ‘I must dash’, because she’s already been standing talking at the open front door for half an hour, and the Provincial Lady’s ankles are frozen, and then she’s there for another hour relaying yet more village stories of vital import.

The Provincial Lady knows another Lady in the village, Barbara Blenkinsop, who lives with her aged mother who is always just about to die, possibly in the next few days, by which means the mother has permanent care by a slave daughter, and Barbara is tied to the house forever. The Provincial Lady’s advice is urgently sought when Barbara’s admirer (I cannot remember now how she ever escaped her slave duties to meet and attract an admirer, but there we are) demands that Barbara marry him immediately in the village church and come away with him to the Far East, where he has just been posted. Barbara spends a lot of time in agonised runnings up and down to the Provincial Lady’s house and back to slave daughter duties, to consult, to be advised, to wail, and to suffer. The Provincial Lady quite enjoys it, because suddenly she is the hub of key information, and the other village gossips come to her for the latest on the story. The village is agog, and Barbara’s mother thoroughly enjoys her role of sacrificial victim. But, thankfully, the Blenkinsop family arrive, hold a secret conclave, and produce Cousin Maud, their secret weapon. Barbara is whisked away by the admirer to get married and move abroad, which she does in a bewildered way, and Cousin Maud moves in, to open all the windows, feed Mrs Blenkinsop healthy meals without any slops, and to take her out for runs in the car. Mrs Blenkinsop, who had previously claimed she couldn’t cross a room without dropping dead, seems to be coping quite well with this galvanism, to the village’s fury. The Provincial Lady, as chief Barbara substitute visitor, enjoys her changed outlook. 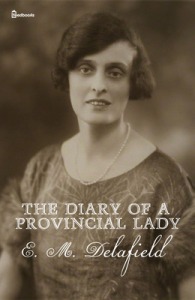 But the Provincial Lady has more to her than being a village stalwart and aristocratic victim. She is an author, a lady of literary qualities, and a regular competitor and sometimes even a winner of the competitions in Time and Tide, an influential, and real, weekly literary magazine that ran from the 1920s to the 1950s. The Provincial Lady has sophisticated friends and literary contacts, who lure her back to London for dinners and shoppings and disastrous hairdressings, and very enjoyable times away from her family. She even gets to go to France, for a week swimming in the sea, not very well, and mingling obliviously with the glamorous and the beau monde. I think the friend who invited her to France for the sea swimming was probably a portrait of Rose Macaulay, a fellow contributor to Time and Tide whom she saw regularly at dinner parties, and a passionate advocate of swimming in all weathers.

All these places that the Provincial Lady goes, and the social life she has, are rich and fertile ground for all the chaotic and ridiculous comic descriptions one could want.  The Diary ended too soon for its delighted readers, so it continues in two further volumes, which take in the war as well, and her trip to the United States. But Delafield died during the war, at the peak of her career, which a sad loss to women’s writing and to comic writing in the classic British tradition.

* Looking at the book covers available in Google images, it seems that half of them call this book Diary of …, rather than The Diary of ….. I’ll stick to the more grammatically correct variant.