This podcast scripts catch-up from the Really Like This Book miniseries on the mighty tradition of British humour in fiction is on Stella Gibbons’ fine satire of rural life and literary pretentiousness, Cold Comfort Farm (1932). It won a prestigious literary prize in 1933, the Prix Femina Vie Heureuse Anglais, which marked the novel out as being one of the best of that year. Its story is simple: Flora Poste decides to civilise her Starkadder relations by leaving her ordered, London existence, and goes to live on their farm, Cold Comfort Farm, in Sussex. All is Gothic, melodramatic, and rural, a parody of the style used by a particular strand of British writing from the 1920s and 1930s that wallowed in extremes of emotion to produce melodramatic, earthy effects. Mary Webb is the usual suspect as Gibbons’ main target, but Sheila Kaye-Smith, D H Lawrence and Constance Holme have also been accused of too much melodrama. Whoever the criminal, Gibbons has a fine old time tearing their style to shreds.

She begins the novel with a mock Foreword to a pretentious but invented author of note, Anthony Pookworthy, whom she addresses as an acolyte. However, this acolyte makes it clear that while her novel is intended to be funny, she is aware that his style (which we are to understand is overblown, pompous, self-important, and ridiculous) is not  … funny. And so she has regretfully felt it necessary to add asterisks to her paragraphs that are deliberate hommages to his, and to others of his ilk, so that readers will be able to spot them easily, and admire them properly. Thus Gibbons makes it clear from the start that her novel will not show any weakness. Let battle commence.

Her landscape descriptions do the bulk of the work in sending up the really overblown prose styles, the kind that relentlessly connect sex and women’s bodies with fertile dimpled dells and swelling rhododendron buds. I think we can all do this now without even trying; the British have been well-educated in how to add sex to satire. D H Lawrence in particular was considered very daring and scandalous by writing about buttocks and haunches in plain English. When Gibbons sends up this style, she did two things; she released a gale of common-sense laughter to mock that particular explicitness in literature, and she showed, simply, how silly it was, as a way of writing about life.

As well as landscape ridicule, we also have Mr Mybug. Mr Mybug is a writer and a self-consciously modern Bohemian who latches onto Flora when she is visiting the local village. Mr Mybug bugs Flora by getting in her way, by assuming she is passionately interested in him (so tedious), and by being boring. Flora is much more concerned with the messy lives and melodramatic goings on at her relatives’ farm. Mybug is a Lawrentian satire on his own, a tubby little man (although Lawrence was a skinny bloke) who can only talk about sex, which is very boring for Flora, and so predictable. He is writing a book about how the Bronte sisters framed Branwell Bronte and claimed authorship of all his novels, while he died of alcoholism caused by supplying his sister Emily with gin. This may have been a riposte at current literary theories being hatched at Cambridge by F R Leavis, who famously only approved of one woman novelist in the whole nineteenth century, and that was Jane Austen. However, I’m not sure that Leavis was prominent enough on the popular cultural radar at this time for Gibbons to need to skewer his ideas in such a way. Not that it matters: the Branwell plot is ludicrous enough to be funny in its own right.

Cold Comfort Farm is populated by people wallowing in their emotions. With all these extroverts preventing progress and the establishment of civilised living conditions, Flora will never be able to sort out the farm’s messy situation, so she has to remove the blockages. The male head of the family, Amos Starkadder, is a religious maniac who preaching makes his excited congregations quiver. Flora exploits his obvious passion for performance to get rid of him by sending him out into the world on a preaching tour in a Ford van. One down.

His son Seth is a sex-crazed young man whose shirt-buttons are less functional than they should be. Meriam, the hired girl, is about to give birth by him, again, and Seth slouches about looking triumphant as she approaches her Hour, which we hear about to great effect. However, when the Hour arrives, Flora finds that Meriam has already given birth, tidily and easily as this is her fourth, and she just wants to act up a bit to make sure the Starkadders realise the extent of her Trouble, and the Wrong that Seth has done her, again. Flora feels that some simple advice on contraception might help Meriam’s particular problem of being seduced in the season of the sukebind, and Meriam’s mother, the brisk and snapping charlady Mrs Beetle, thoroughly agrees. Two down.

Seth himself needs occupation; he’s a strapping lad, and needs a job. He can’t be left to slouch about the farmyard looking suggestive all day. Happily, his real passion is for the talkies, and Flora knows just the man to give him a new role. Here I think Gibbons influenced her contemporary Angela Thirkell, whose novels from the 1930s to the 1950s always have at least one film starring her film star Glamora Tudor with a different male co-star each time. Seth Starkadder fits that bill perfectly, and his removal from the farm en route to Hollywood means that the succession after Amos’s departure will be easier. Three down.

Seth’s sister Elfine is a wind-blown fey thing of the valleys, who dances and sings on the moors, and talks to birds and flowers, most irritatingly. She needs occupation, since she is a full-grown girl and in danger of being unhealthily influenced by arts and crafts-affected ladies of the village of no taste or skill. She also needs a husband and a home, and Flora has to get her away from the clutches of her cousin Urk, a grubby farm-labourer who claims that because he wrote his name on Elfine’s feeding-bottle when she was a baby and showed her to the water voles, that makes her his rightful property. Flora detects that Elfine is in love with Richard, the local squire, and she has a very soothing time instructing Elfine in the ways of Vogue and good taste, to educate her for a more county and classically-organised way of life. She and Elfine (beautifully dressed, both of them) attend Richard’s 21st birthday dance at the local Assembly Rooms (if that’s not a Jane Austen reference I don’t know what is), at which Elfine descends the stairs alone into Richard’s arms. Four down. 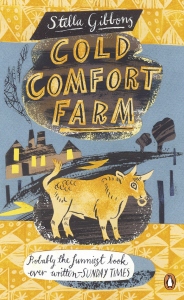 The more difficult members of the family are women, because, like Amos, they have to be removed from the farm before Flora can make any more progress in the family’s rehabilitation. Judith Starkadder, Amos’s wife, is a tortured victim of mother love, and is desolate when Seth escapes. Flora fixes her up with a psychoanalyst, and so Judith goes off to Germany to redirect her fixation towards something less unhealthily Oedipal. Five down.

The last to be shifted is Aunt Ada, the matriarch of the family, who once saw something nasty in the woodshed when she was a little girl, and because of this experience she has held the family in thrall to the threat that she will go mad if her will is ever crossed. Flora finds a way for Ada to realise that, actually, living in Paris might be more fun. So Ada departs, magnificently, in a leather flying-suit: six down. The novel ends on a summer evening with the sound of another aeroplane coming to take Flora away with her true love.

But why is this novel funny? Apart from the ludicrousness of the characters, and the gentleness of the plot, and the spectacularly good use of bathos throughout, this book is funny because it restores order out of chaos, and brings pretentiousness to its knees. The requirements of a tidy life, a civilised frame of mind, and a willingness to live equably with others without fuss, are the foundation for this novel’s assumption that melodrama is just silly, and over-acting is tiresome. It is sheer delight. It is also – very slightly – science fiction. See if you can spot why.