Skip to content
Kate 20thC, baroque and dramatic, E F Benson, middlebrow, oneupmanship, parody, passion and secrets, political / social commentary, the life of the times, Why I Really Like This Book June 27, 2016June 26, 2016

The immortal E F Benson begins this podcast scripts catch-up from Really Like this Book, loosely based on the English country village. I wanted to collect together novels that showed different aspects of an English village in fiction, to see how a village was used, and what the village actually was. Benson’s undying contribution to this genre is the Sussex village of Riseholme, ruled over with an iron grip by Mrs Emmeline Lucas, more commonly known to her intimates as Lucia. Benson was the son of a future Archbishop of Canterbury, who represented England at figure-skating (it says on Wikipedia), shared a villa on Capri with a close male friend before the First World War, and is usually regarded as one of the great gay novelists of the 20th century. He is also one of the great English short story writers, but wrote over 50 novels, his most famous being the Mapp and Lucia novels, of which Queen Lucia (1920) is the first. I won’t say any more about Miss Mapp just now, but once you’ve experienced Lucia in this book, you absolutely must go on to novel 2, Miss Mapp (1922), and then relish the clash of these titans in the fourth book, Mapp and Lucia (1931). 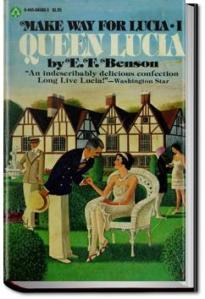 While the Mapp universe is set in Tilling, based on the Sussex town of Rye where Benson lived, Lucia’s village of Riseholme is more of an invention. It is four hours away from London by train (probably more like one hour today), and it has a plethora of Elizabethan buildings which the incoming, middle-class inhabitants have refashioned into their idea of a perfect idyllic residence for all seasons. Some residents do more refashioning than others. Lucia, who first promoted Riseholme as a desirable residence, actually built an extension to her house that is more Elizabethan than anything else in the village. She decorated it in period perfection with rushes on the floor, a mermaid door knocker, almost no modern lighting, and black-letter volumes in unreadable Gothic script to suggest that, really, this room was where Shakespeare would have preferred to have written his immortal works rather than a scrubby theatre in London, a place that Lucia abhors. Her garden is planted with Shakespearian flowers, and her friends come to coo at the latest blossoming each spring. Does this sound twee and camp and rather too rarified for anything more than mild amusement? Is Riseholme merely a playground, rather than a place to live? Let us leave the setting, and focus on Lucia, for she makes Riseholme an arena for epic battles of socialising and showing off.

Lucia is the ruling tyrant. She has all the best parties, and all the best ideas for fun and entertainments. Her husband’s wise investments means that she can keep pouring money into her social whirl and thus lead the entertainment with resources as well as with her ideas. Her ideas are magnificent. She is a stupendous collector of fads, adopting them so quickly, and becoming expert in them so ruthlessly, that hardly anyone could guess that she is usually only one step ahead of the herd in spotting the latest trends coming and going. Her husband, Peppino (or Mr Philip Lucas, if you want to be tiresomely English about it) is her faithful consort, but has few natural skills apart from making money, and spotting gossip where others might miss it.

Lucia’s most important supporter is Georgie Pillson, her Prime Minister and courtier, a camp little man with admirable talents in embroidery who is quite the nicest person in Riseholme. She and he memorise Italian phrases to shriek at each other lovingly in public. They like it to be suggested, by others, that they are unreasonably devoted to each other, but that his devotion is fated to be unrequited in any meaningful sense. For a man who has his hair redyed every few weeks, who wears a little cape over his white linen suit when the evenings threaten to be chilly, who likes to dust his own bibelots and who is protected from the world by his devoted parlourmaid Foljambe, avoiding marriage is probably wise.

Lucia’s enemy, her rival in striving for social pre-eminence, is her hearty neighbour Daisy Quantock. Daisy is just as good as Lucia in spotting trends that she can give exclusive little parties for, but she is much more rash. She invites total strangers to stay with her for weeks because they have told her that they are an Indian guru, or a medium, and so she usually gets taken advantage of. However, Daisy is also shrewd: she can cover up her own mistakes very skilfully. Since pride requires that none of her friends must know when they’ve been taken for a ride by imposters, or when something has been got wrong, Daisy’s quick damage-control actions are admirable, quite as good as anything Lucia can do herself. 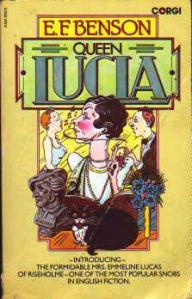 Lucia, however, has the extra quality of artistic integrity. She set herself up as THE arbiter of all aesthetic judgements in Riseholme, and the dispenser of correct musical and dramatic  tastes to her friends. She has refined senses: she cannot bear to hear a gramophone. She cannot bear to play the second and third movements of Beethoven’s Piano Sonata 14 in C-sharp minor, not because they are too loud and abrupt in comparison with the First (which she casually refers to as ‘Moonlight’), but because (whisper it) she has never learned to play them. She and Georgie rehearse secretly and separately for their duet playing, pretending to each other that they haven’t practiced at all; such is the spirit of competition in Riseholme that keeps everyone eager to improve themselves, to show they are worthy of the efforts that Lucia puts in to keep the village’s artistic tone thoroughly raised.

In such a heaven of well-controlled acolytes, who act as an obedient chorus meeting each morning for gossip on the village green, how can anything go wrong in Lucia’s paradise? It does when a stranger comes to town: one of the two classical beginnings to any story. (The other is: someone goes on a journey.) The stranger arriving in Riseholme is someone truly famous, the marvellous prima donna Miss Olga Bracely, who is the Real Deal compared to Lucia’s seriously limited understanding of music, art and the theatre. Georgie falls in love with Olga (platonically: she’s married, and we know he’s not the marrying kind), and Olga adopts Georgie as her new best friend in Riseholme. This brings out the really honourable side of his nature, which such a long and close association with Lucia had begun to turn just a little bit catty. For Lucia cannot endure competition, and she exposes herself horribly when she is thwarted in her schemes by Olga’s incomparably better ones, and bitches like a fishwife. Georgie is shocked at such a failing by his former idol, but his noble nature, encouraged by Olga, helps Lucia recover her poise, and find a way for her to be happy again. Olga submits gracefully to being patronised, Georgie is admitted back as Riseholme’s Prime Minister, and the parties and soirées continue pleasantly without that rather unrestful sense of vicious, Medicean competition that Lucia had instigated. For she will not lose control of her kingdom: it is her realm, her validation, her reason for being.

The village chorus on the green are amusing, perfectly nice ordinary people, but they are also rather stupid, and have no initiative to compare with Lucia’s. The only people who can see right through Lucia are the outsiders. Georgie’s beefy sisters Hermione and Ursula are two of her most sarcastic critics, but they don’t really care: Lucia doesn’t play golf or like dogs, so for them she is really only worth laughing at, not exposing. They can be bribed with good food and champagne not to rock any boats.  Peppino probably does see right through his wife’s schemes, but he is powerless against her basilisk stare. They have no children; I wonder why? Actually, there ARE no children in Riseholme, except for a village boy who runs errands for the shopkeepers. Children, and the local working classes, exist only to serve, and if they don’t serve, they don’t exist. They have no function in Riseholme’s social life, except at Christmas for carol-singing purposes. This is again an aspect of their serving function: they help to decorate the village for the amusement and comfort of the middle-class rentiers who live there as if in a playground.

Other normal aspects of a village community are similarly twisted towards the perpetuation of a tyranny of culture. Church is something one goes to on a Sunday because that is correct behaviour: it has nothing to do with religion, and the vicar is hardly invited anywhere. Possibly he and his wife are too dull, not admiring enough of Lucia. Church is also a place for oneupmanship. After a long and very fashionable party of romps at Olga’s one Saturday night, from which Lucia departed offended without anyone actually noticing, she was pleased, though of course suitably and audibly disapproving, that Olga was not at Morning Service next morning. Doom once more fell upon Lucia’s snootiness when Olga’s perfect, highly-trained and utterly glorious voice rang out from behind the organist’s throne in an anthem. It was not even criticisable as a showy personal performance, since Olga stayed out of sight throughout.

There is nothing Lucia can do to vanquish Olga, and nothing Olga can do to persuade Lucia to stop being such a domineering grabby, superior old cat. For the good of the village, Olga and Georgie hatch a plan to bring Lucia back into some popularity (for her friends can see perfectly well how good life can be when the tyrant is unseated), and peace is restored when, after a magnificent performance of some Wagnerian tableaux in her home, Lucia advises Olga, who has previously sung at Covent Garden and probably at the Met, on stage presentation. The village is whole again: only one queen may rule.