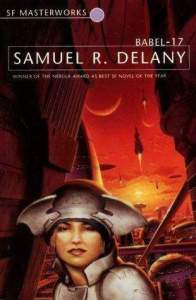 I loved this novel. It was an impulse purchase although I was looking for a Delaney. I’d read that he was a close friend of James Tiptree jr, whom the world now knows was Alice Sheldon, and wrote feminist sf, so I wanted to find out more. Babel-17 (1966) is certainly feminist, but in a breathtakingly audacious way: it simply isn’t made an issue. Delaney just writes a novel about language, xenotranslation and mathematics, and wraps it around a pirate space opera. All the potentially contentious feminist, post-racial, gendered stuff is tucked out of the way, under the hood, where it powers the novel unnoticeably, just purring along.

Babel-17 is beautifully well written. It’s adorned with poetry, because Rydra Wong the protagonist is a poet as well as a xenolinguist, and I can believe her poems are real. (Apparently they are real poems, by a real poet, not just mugged up for the novel.) The space opera feels like a James Blish engineering romp, but aeons ahead in social attitudes. We have the pleasure of superbly plausible space-tech details to ease us through an engaging plot about people who live, work, and continue to work after living is over. 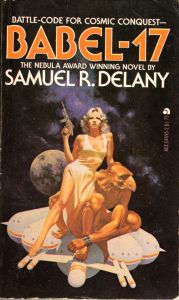 Delaney’s invention is stunning. Old pilots and navigators never die, they just become discorporate, and inhabit a special space station afterlife facility until their skills are needed for voyages where the physics and working conditions would pulverise living bodies. Rydra breaks the alien code (Babel-17), and is plunged into an alternative existence of enhanced senses which makes human speech and thinking impossibly slow. Bored crews save their money for cosmetisurgery so they can wear tails, or remodel their bone structure for better shipboard function where navigation means a whole-body interface with the shipbrain. The discorporate crew have no audible voices, but they speak directly to Rydra’s brain, so she can self-program their remarks into Basque before they dissipate completely. (Why Basque? It’s a memorable sound, so Rydra can recall what those crew are saying from phoneme memory rather than meaning.) Navigation crew triad up in threes in a marriage that lasts until death, working and playing together through the stars.

Who cares about the plot: Delaney’s details and world-building create the real magic. It was joint winner of the Nebula Best Novel for 1966. Go find a copy. I’ll race you to the Delaney shelf.