We’re in the Outer Hebrides in the 1930s in this Really Like This Book podcasts scripts catch-up, on a mad quixotic journey in the roughest of conditions to locate, observe and tag an obscure little bird called Leach’s fork-tailed petrel. Island-Going by Robert Atkinson is a classic of nature writing, of social history, and of the insanity of the obsessive scientist. I like to know about the practical arrangements behind scientific expeditions, and this one is particularly wacko. Atkinson was an Oxford undergraduate in 1935, or possibly a postgraduate, it isn’t very clear. He and his friend John Ainslie wanted to locate and record Leach’s fork-tailed petrel, in remote and unrecorded birding territory. They were drawn to the Outer Hebrides, mainly because of its relative ease of access from southern England, but also because, as the introduction to the Canongate edition of Island-Going says, very few people were even looking at the outer Scottish islands in the 1930s. Britain was very England-centred at that time, and Scotland was just a holiday destination. These chaps chose to study and pursue Leach’s fork-tailed petrel because it did have known locations, places that it had been spotted at in the past, and these were ludicrously remote even in a Hebridean context. The Flannan Isles, North Rona and St Kilda are practically off the map, so this was clearly a zestful challenge for two young Englishmen on their summer vacation.

The first trip was taken by travelling up to Cape Wrath, the most northerly westernmost point in Scotland, and taking a fishing boat to Handa Island. They observed birds, got familiar with the parenting habits of fulmars, watched the porpoises and peregrines, and every few days caught the fishing boat back to the mainland for a wash, decent food, and a replenishment of supplies. Camping on the island in the very rudimentary old cottage used by stranded sailors and the lambing crews was primitive, but primitiveness does not seem to bother Atkinson. The worse the conditions, the happier and more interested is his writing. There is no way I would want to recreate his experiences counting birdlife and sealife, but it is riveting reading.

In their second year, the boys – and they really were boys, only 19 and 21 – tried something more advanced, by going to the island of Rona and to the Shiants, which you can read about in Adam Nicolson’s Sea-Room. Atkinson got permission from Nicolson’s grandfather, the then owner, to land on the Shiants to observe the birds, but to get there they had to make a risky trip by boat, and to get the boat they first had to transport all their stuff – in seven packing cases – up from Oxford by car. This car was rather fragile in its construction, and didn’t really have much life left, but it did get their gear up to the far north-west coast for shipment over rough seas to their first destination, North Rona. The trip by drifter over to the island exposed the weak spot in their operating methods, since poor John Ainslie was a martyr to seasickness, and had to suffer so much of this in repeated approaches to the islands in rough weather, that he gave up going on the expeditions. They landed, they made a camp, they found prehistoric settlements, and at last, in the night, they could hear the peeping of Leach’s fork-tailed petrel as it flitted to and fro nocturnally. You couldn’t imagine a more difficult and elusive bird to observe. It was unknown where they came from, where they went when they’d stopped zooming around in the night on Rona for these few weeks in the year, and why they came there to breed. Hence, of course, the interest in observing them.

The birdlife is not the only interest in this delightful and really rather mad account of interwar ornithology. Atkinson is acutely aware of the life of the islands as well, through the history of the buildings: from tiny early Christian monks’ cells to nineteenth-century lambing pens and the bins of the seaweed-gathering industry. The history of the communities on the edges of the Scottish west coast were then just as unrecorded as the lives of its birds. When historians don’t speak or understand Gaelic, huge areas of history will disappear without anyone knowing. Interspersed between their own adventures, Atkinson is very keen to collect together the older notes of other travellers and scholars, making Island-Going a repository for all the information about one particular small island. The human history then becomes important again. 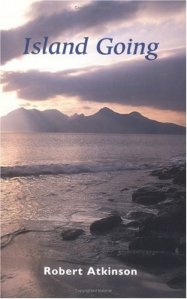 But the birds are really the focus, because there are so many of them. Hundreds of thousands of individuals roost and breed on the islands that Atkinson inspected, and he became familiar with entire populations. Not with single birds, because they were perpetually off and about, but with the habits of a species. The greater black-backed gull will prey on puffins, and turn them inside out while pecking out their meat. Fulmars squirt oil at anything and everything when they’re feeling unnerved, for protection as well as an alarm. The four kinds of petrels that spend a tiny part of their lives on land all lead a rather risky lifestyle, laying only one egg a year, and have no sense of which is their own chick when it comes to feeding time. Subsequently one chick might starve to death because its parents forget which one is their own, and feed another baby instead.

The boys also integrated with the human work on the islands, pulling the focus of the book back from horrible bits of bird corpse and broken eggshell. The annual sheep gathering on Rona wakes them up one morning, so they spend the day helping to round up sheep with fishermen and shepherds. They moved to the Shiants mainly because the opportunity arose when a friendly boat was going over there anyway. Its relative luxury of an intact cottage for sleeping in, and foliage that grew more than an inch high above the ground, made the Shiants seem paradisical compared to the rigours of Rona, stripped bare by Atlantic weather, but then they discovered the rats. The Shiants do have a rat problem, which will eat anything not nailed down or locked away. The boys struggled on, competing with the rats for their own food supply, to become perturbed when there was no sign of their return lift on the horizon. They did some rudimentary fishing to stay alive, and were rescued four days late, because their fisherman had just forgotten to come and fetch them. This was apparently rather funny, in hindsight.

The trip to the Flannan Isles brought the boys greater comfort: accommodation in a lighthouse, with lobster teas to catch. Sheep were pastured there, so they went in with the sheep boat, and stayed with the lighthouse-keepers for a few days. This takes the narrative away from ornithology to late industrial practices, with intense interest in the maintenance of the light. When not watching the thousands of resident puffins, the boys played golf on a five-hole course laid out for the entertainment of the keepers.

In 1938 Atkinson’s expedition was to North Uist, St Kilda, and the Monach Isles, to get away from mainland Scotland as much as was humanly possible without actually going to Iceland. The Uists had red-necked phalaropes to watch, the Monachs had rabbits and lobsters, and also hosted a game of beach cricket between the incoming scientists and the locals, who were learning the game for the first time. On St Kilda, Atkinson was hoping to photograph the St Kilda wren, and maybe the St Kilda house mouse, of which only twelve had ever been seen. He managed to land in good weather, and was given the empty manse for his house, one of a string of stone-built cottages on St Kilda’s only street, all deserted by then except in the summer months. Three of the islanders were in summer residence, come back from their exile on the mainland to keep an eye on the island during its brief tourist season, and to sell postcards (but never on a Sunday). Snipe rootled around in the grass outside Atkinson’s front door, and the village was alive with all the St Kilda wrens he could want. There were also other bird stories to explore. The St Kildans used to catch and process fulmars for food and trade: their body oil used for train engines and lamps, and their feathers stuffed mattresses for First World War soldiers. Finlay McQueen showed Atkinson how to catch puffins by a long pole with a loop at the end. The St Kilda chapters are ghost-ridden, because this was the most famous of the Hebridean islands to be evacuated and abandoned, incapable any longer of sustaining life.

Atkinson’s last expedition before the war was an attempt on Ultima Thule, which means the ends of the earth, his facetious name for Sula Sgeir, a gannetry in the middle of the Atlantic. More vast quantities of birds, more primitive conditions, more astounding natural beauty, and more remnants of human habitation dating from when living was expected to be brutal and hard. This whole book is a record of survival, if not of the birds, then of the people who scratched a living from the earth in the middle of the sea. You’d never want to go and do it yourself, but it is a terrific record of its last survival.

3 thoughts on “Hand me a petrel: Robert Atkinson’s Island-Going”