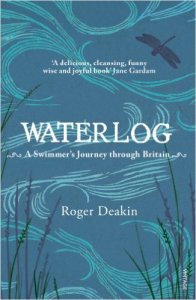 Roger Deakin’s classic of wild swimming is the subject of this Really Like This Book podcast scripts catch-up: Waterlog. He began his project swimming up and down the moat in his garden, with the thought that he really wanted to swim around Britain, but would settle for sample swims in places where swimming ought to be done. He is a very charismatic writer, or rather was. When reading this book I was so enthused by his personality that I looked him up, and found that he died in 2006, to my great sorrow. He’s one of the few modern writers I really would have liked to have met. The personality on the page may be fun to read, but may not be quite as much fun to watch and listen to in the flesh. Roger Deakin would, I think, have been great fun, as well as a nice, normal, friendly man, a good bloke to spend a day with pottering about on the hills. He was an environmental campaigner and a writer and film-maker, who lived in an old farmhouse in Suffolk, the county north of London on the east coast. When Waterlog was published it apparently changed public opinion about public access to natural swimming places in Britain. I’m not about to join them in the sea or in the freezing cold rivers of the Yorkshire Dales, but I’m all for more public access to common land and open air.

His farmhouse moat was a strip of water rather than a ring, in which Deakin routinely swam a mile in all weathers, every day, except when the moat was actually frozen over. During the course of the book he returns there regularly to swim there for comfort, to check up on things at home, and to think things through after disturbing times or after too much exhilaration. His swimming is of course not just swimming: it’s meditation, it’s exercise, it’s nature observation, it’s amusement and wonder and excitement, and it’s the simple pleasure of moving around in water. Deakin keeps saying that he’s no more than an average swimmer with reasonable endurance over distance, but swimming in the cold, and in waves, and in pondweed, and among the pike is very different from safe chlorinated municipal pool swimming. We need to plunge in. 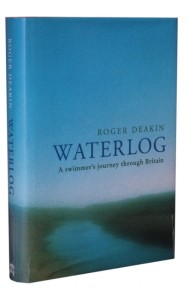 Waterlog is also about what lives in the water, from bacteria and pollutants, right up to swans and otters. Deakin has a couple of exciting swims trespassing on fishing beats where he joins the trout to swim up or downstream past fishermen, who don’t notice him at all, whereas all the frogs do. He has a couple of good arguments with water bailiffs who object to him using public access paths to the water because they’ve decided to close off the banks. But he also takes pains not to be a nuisance to those who are worried about his safety: one time when he was enjoying a swim in the sea, he noticed a couple of workmen rushing down to his abandoned pile of clothes on the beach, thinking that he’d done a Reggie Perrin, so he swam back to shore to apologise and thank them. Outwitting the authorities where he sees no good reason for overbearing rules and regulations, are what makes this book an invigorating read, and an inspiration in how to circumvent bureaucracy politely. Deakin knows the law, he knows his pollution chemistry, he was a founder of Common Ground: he knows his stuff. He definitely doesn’t like the way that statistics are used to mislead the public and keep them out of the water. He finds it unreasonable that fishermen pay money to secure their private use of natural resources that should be available to all.

The first swim out of the moat is in the Scilly Isles, south west of Cornwall. Deakin plunges into Atlantic Gulf Stream waters, and immediately rushes out again to get his wetsuit on. Such unabashed practicality is very endearing: who could enjoy swimming with frozen legs and feet? It’s not just the bracing British cold waters that the wetsuit helps with, it’s also the seaweed, the mud, the jellyfish, the bashes and bruises from rocks as Deakin is tumbled down waterfalls and through gorges in which neoprene protects the fragile human. He does seem drawn to unusual aquatic environments: in the Scillies he observes from above, with mask and snorkel, the remains of drowned prehistoric farmland.

In the Fens in eastern England he goes swimming in seventeenth-century drainage ditches and in the Great Ouse River. He swims with the fishes in Hampshire trout streams and in the New Forest. He takes his tent into the Welsh mountains for a really long hunt for pools to splash around in, and finds tarns in the Peak District full of ice cold water to fling himself into. He has a terrifying baptismal slither through a near-underground gorge where he was swept downstream and further away from daylight, from pool to pool by the force of the water. His greatest challenge was to swim the Gulf of Corryvreckan off the island of Jura, where George Orwell used to live, but, thankfully, the waves were high and the whirlpool was too dangerous that day, so Deakin retired with humility in the face of really frightening swimming conditions. He’s not a lunatic risk-taker, but certainly likes to look long and hard at risks before deciding what to do about them. 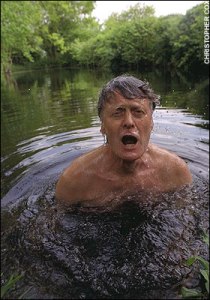 Not all his swims are so unnerving: my absolute favourite is the communal family swimming hole at Fladbury, where generations of an extended family use a mill and its mill-race as their aquatic summer home, frequently flooded, always in wellingtons, and every day in the water, for all ages. What could be more civilised? I was charmed to discover the history of the Farleigh Hungerford swimming club, because that’s the part of the world my parents grew up in. Moving out of the river and into manmade swimming pools, Deakin is invited to swim as a guest in several terribly posh and impressively venerable private outdoor and indoor pools, the grandest of which has got to be the Royal Automobile Club premises on Piccadilly. The outdoor pool at Hathersage even has a bandstand. He goes to Droitwich Brine Baths for an out of body swimming experience where he bobs up and down like a duck in the salt spa water. Reading about the wave of outdoor pools built around Britain in the 1930s brought back my own childhood memories of swimming in Portishead outdoor pool when staying with my granny. This is a beautiful art deco construction on the edge of a cliff. I was also a bit sad that Deakin didn’t make it any further into Scotland than Jura, because he would have enjoyed Stonehaven’s outdoor pool, also art deco, filled up nice and warm with heated seawater.

With sea-bathing goes sunbathing. Deakin made me laugh out loud with his description of the nervous language used on official noticeboards to warn the British public of the presence of naturists. The British have never been comfortable with taking their clothes off, which is why we make so many jokes about nudity. Nudists on British beaches are very suspect, so Deakin’s account of tiptoeing past a nudist beach on his way to the sea is perceptive and funny at the same time. You’d think they were as dangerous, and as unBritish, as an unexploded bomb. Indoor nakedness, in a public steam room, for example, is quite different.

Another unBritish aspect of swimming is the history of the front crawl. Apparently this was brought to Britain in the nineteenth century by a Mr Trudgen, who had learned the style from South American natives, and caused a sensation in a swimming race in 1873, which he won with a combination of overarm strokes and frog-kicking legs.

Pure enjoyment is what keeps Deakin going, because he simply loves swimming: the process of it, the rhythms of it, and the feeling of water around and underneath him. When he tries longer distances he takes along a friend in a rowing boat to keep an eye out for jellyfish, and to while away the hours with chat. He admires the annual children’s swimming competition across the harbour in Polruan in Cornwall, where the ten and eleven year olds swim across the harbour, well greased up against the cold. Most of them can swim a mile in open water. He swims along an aqueduct in Norfolk, simply because he’d never done it before. He invents a new way of swimming when he finds an ox-bow river, a loop in the river that has almost become joined at its closest points. This lets him leave his clothes on the bank, plunge in for an enjoyable boomerang whoosh round the bend, and end up on the bank right beside his clothes again, downstream, but where upstream is only a hop across the grass.

The extra bonus with this book is the accounts of the wildlife Deakin meets nose to nose in the water. He has great crested newts in his moat, who don’t always stay there. Like the toads, they appear in the kitchen, temporarily dried up among the potatoes. He tells stories of fish rage, where the fish bite back, even quite small ones, and describes the lifecycle of the leech. This book is sheer animal pleasure from beginning to end.