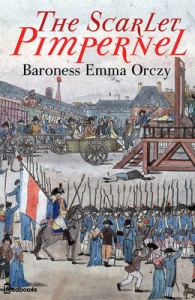 Continuing to swash buckles in the Really Like This Book podcast scripts catch-up, we’re still in wigland, in the eighteenth century, crossing the Channel and diddling the enemy in disguise, with The Scarlet Pimpernel.

First off, what IS a scarlet pimpernel? It’s a flower, a straggling long-stemmed weed-like plant, that grows in boggy places. It comes in a number of colours, and the scarlet version is more of an orangey pink, to be honest. It has five petals, in a nice-sized head to put through your buttonhole, possibly for a secret sign to your confederates that you are of their conspiracy. Baroness Orczy’s novel, The Scarlet Pimpernel, is all about conspiracy, and escape, and plottings, and daring escapades. And for all that to work, when you are pitted against the evil might of the French Revolution, you need a conspiracy that works, and a secret sign that also works. Though, in the novel, I don’t think the flower is actually used as a secret sign. But I’m sure it could have been.

This is another historical novel, published in 1905 and set in 1792, when gentlemen wore wigs and women’s dresses involved the kind of undercarriage that stuck out sideways (called panniers, for those into fashion history, after the French name for the wire baskets over each hip attached by tapes to one’s corset). Upper-class hair was also powdered, and a certain kind of upper-class gentleman was also very concerned with his jewels, the colour of his waistcoat, the set of his cravat, and the right kind of snuffbox. The upper classes lived for pleasure, while the working classes were paid very little to work very hard to provide that pleasure. This kind of class inequality brought about the French Revolution, which terrified the upper classes all over the rest of Europe, and was particularly disturbing in England, where many of the French upper classes escaped bringing tales of how their unluckier friends and families had been caught, imprisoned, and executed. The upper classes of the England were naturally very sympathetic to their friends and relations in France, and many efforts were made to get the well-connected French aristocrats out before it was too late. All that is history.

Where fiction sets in is in the details of the daring escapes and rescue missions that Baroness Orczy invented. She too was an aristocrat, born in Hungary, but she had a very happy marriage with the son of an English clergyman. She began writing novels simply to earn some income, but it was the play of The Scarlet Pimpernel that brought her first real success, and which, in novel form, made her famous. It ran for four years in London, which meant four years of continuing publicity for the novel, and its twelve sequels. The character of the Scarlet Pimpernel too was very important: he is the first of the hero-fops in modern romantic adventure fiction: a man with two identities. The romantic subplot in the novel is whether and how the heroine will find out that the fop she despises (and how sad that is because she is also married to him) is also the magnificently brave hero that she worships.

The plot of the novel begins with a daring escape from the Bastille, by which the reader is led to understand that all who support the Terror of the French Revolution are either stupid, or evil. It’s not a nuanced point of view. The next scene is in a jolly rural pub on the south coast of England, where all is clean, cheerful, familiar, and above all, safe. Some rescued aristocrats arrive here to be greeted by representatives of the League of the Scarlet Pimpernel, who have whisked them out of France. The aristocrats all chat to each other, while the yokels shuffle loyally and obediently out of the way, into the snug. Another aristocrat arrives, the dull and stupid Sir Percy Blakeney, and his beautiful French wife Marguerite. She is a former actress, the cleverest woman in Europe, and pitied by all for having a lunk of a husband who can neither match her for brains or for looks. She is also snooted at by the very strictest of the French aristocrats, not so much for her artistic past, but for her politics, in line with those of the Terror, which led her to denounce one particular aristocrat. Baroness Orczy tried hard to introduce some political nuance here, to show that it was possible to approve of the Revolution’s ideals and not approve of its brutality, but this all fades away in the face of Marguerite’s agonies about her love life, her married life, and how she will manage to rescue her brother from the Revolution’s clutches.

Enter the villain, the pitiless human face of the revolution, the ambassador of the Republican government of France to the Court of St James, M. Chauvelin. He is, naturally, a very unpopular person at the English court, since he represents the murderers of many friends and relations of the Upper Ten Thousand in London society. But because he is an ambassador with diplomatic immunity, and because the English are all perfectly mannered, everyone is chilly and distant, but not actually rude to him. Some even play cards with him, like that ridiculous oaf Sir Percy Blakeney, but Chauvelin does not pay much attention to such idiots. He is more interested in blackmailing the likes of Lady Blakeney, and in forcing her to reveal secrets and names in which the Revolution is extremely interested. Poor Marguerite gets in a total tangle through being brave but also in being compromised by her relations. She finds herself in dreadful trouble, from which no-one can rescue her, though she longs for the Scarlet Pimpernel to rescue her, since he seems to have an unbroken record of success in rescuing everyone else who needs it. Instead, all she has to rely on is her oafish husband, who lately has been betraying some feelings for her that she hardly expected in one so bovine, and previously uninterested in anything much except cards, or wine. But she cannot rely on him, of course, and so Marguerite flings caution to the wind and rides for France, to sacrifice herself, if she must, to save her brother and her honour. But by going to France she seriously complicates the rescue plans that the Scarlet Pimpernel has already laid down, and so we have a terrific farrago of disguise, midnight escapes, overheard confidences and creepings about in the backstreets of Paris.

It’s a very simple story, at heart, and if you want to be critical you could say that the novel is repetitious, and that the narrative leaps about from one character to another without discipline or sense. It’s very melodramatic, and hopelessly romantic, and it would not be wise to rely on the plot as a basis for revision for a history exam. There are fine scenes of eighteenth-century high life and jolly scenes of faithful English country life. We are expected to be completely on the side of the aristocrats and the royalists, and to despise anything with the word ‘republican’ in its name. This is not a novel based on a complex set of political ideas. But, for all that, this is wonderful swashbuckling novel of adventure and thrilling romantic escape and derring-do. It ticks all the clichés in the box and it is all the more enjoyable because of it. Other romances of the French Revolution have been better written, more plausible in their plots, and with better literary style. But The Scarlet Pimpernel was the first one to make the French Revolution quite so dashing. Charles Dickens also romanticised the sufferings of the victims in A Tale of Two Cities, but Orczy did romantic escapades with the right amount of effervescence and excitement to keep us reading, agog for the denouement, rather than for historical detail or a moral lesson.