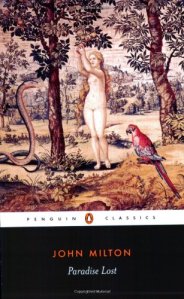 Hail Lucifer! The Really Like This Book podcast script catch-up tackles Milton’s Paradise Lost, that monster epic of the Restoration in which God is the villain, and Lucifer is the first anti-hero. Let’s pause to consider the history. We’re in the seventeenth century, when Britain was split in two by the Civil War, which ended when King Charles I was decapitated in central London after a formal trial by his enemies, the Parliamentarians. We then had an Interregnum – an interruption of monarchical rule – that lasted from 1649 to 1660, under the Protectorates of Oliver and then Richard Cromwell, that were characterised by severe social austerity under Puritan dominance. Charles II, son of the decapitated king, was restored as king in 1660, and society went wild. You could wear colours again. The theatres reopened, and before long even women were appearing on stage. Civil morality plummeted, led by the flamboyant and openly sexualised behaviour at Court.

This new atmosphere of libertinism must have been troubling if you had grown up under the overtly religious monarchies of James I and VI, and Charles I, as John Milton did. During the war he was Oliver Cromwell’s Secretary for Foreign Tongues, because he wrote and read, and probably spoke, eight languages. He was in charge of the Protectorate’s propaganda and censorship. But he was also a passionate polemicist in defence of political liberty and free speech. He wrote rebuttals of Royalist attempts to make Charles I a Christian martyr, and a formal Latin defence of the English people as a state without a monarch. This fixed his European reputation as the most learned man in England. He married three times, his first two wives dying in childbirth. He was completely blind by the time he was in his mid-forties (so he never knew what his second and third wives looked like). Problems in his first marriage made him campaign for the legalisation of divorce: this was a very risky thing to do since it defied Church teaching, but risk and criticism was not something Milton stayed clear of. He continually published poems – which was a form used widely for political argument – criticising social and political behaviour of the day, and defended the right of free speech and republican government. Naturally, this long record of republican activism did not go down well after the Restoration, when Milton lost his job. He lived for the rest of his life in political disfavour and comparative poverty, as well as blindness. In these conditions, he wrote the epic poem for which he is most remembered, and which is a serious contender for the greatest English poem ever written – Paradise Lost.

Common modern reactions to the thought of reading Paradise Lost include: ‘it’s too long’; ‘it’s boring’; ‘it’s in weird English’; ‘it’s incomprehensible’; ‘it’s sexist’. Let me tackle these one by one. The length: well, it’s an epic. Milton’s poem is about the Fall of Man, why Adam ate the Apple, in the context of why Lucifer fell from Heaven, why he wanted revenge on God by destroying those whom God loved best, how he planned his escape from Hell, his journey across the universe to track down these tiny creatures on a tiny planet, and to seduce the weakness of humanity away from the strong and loving rule of God, represented by his archangels and Christ. That’s quite a subject. It’s not going to be handled adequately in a sonnet, or a poem of one or two pages. It requires an immense amount of writing. ‘Too long’ is a problem only if you’re looking for a quick read on the train, or something you can dip into and out of again over several months without forgetting anything important. Paradise Lost is a good long meaty read, a hearty meal of words and images highly suitable for evening reading (aloud) for a stay in a holiday cottage without internet or TV.

How can such a subject, such action, so much drama and debate, be boring? Paradise Lost needs some concentration, to be sure, but it is gripping stuff. Personally, I think Lucifer’s escape from Hell, and his journey across the universe are thrilling. His attempts to seduce Eve in the garden of Eden are tense and cliff-hangery. The efforts of the archangels to search and destroy a suspected evil in their midst have a certain relationship with wartime thrillers.

The language shouldn’t really be a problem, but a way around this is to listen to the poem as an audiobook. I knitted a large amount of green sweater while listening to this poem for the first time (though I already knew it in patches from reading). I was gripped and fascinated by the drama, without having to worry about the spellings. The sound of seventeenth-century English is a lot more familiar than its appearance. Hearing a well-trained actor read you the poem also lets you hear how it should be read, with all the sweeping vastnesses of Milton’s epic language made clear and natural. There is something off-putting when you begin reading a heroic simile on one page and have to turn over two more to get to its end, because you don’t know where you’re going, and you fret about leaving the main path of the poetic narrative. The actor reading the poem for you knows exactly where they’re going, and so you can relax and let them tell the story as Milton intended it to be told, leisurely, in control, and with pleasure.

The incomprehensibility of the poem depends on how much of the Bible and how many Greek and Latin myths you know. Milton was writing for readers who shared his cultural norms. He expected everyone to know intimately the details of the Fall of Man and also all the comparisons he brings in, from the fall of Troy, the Aeneid, the Odyssey, Ovid’s Metamorphoses, and so on. So if you’re listening on audiobook and don’t know all this stuff, the effect will be of a delightful extended literature class, where you are told stories and can jot down names to investigate later because they sound rather good. If you read the poem yourself, the footnotes are there to help you, or you can ignore them all until you’re ready to investigate just a few points of puzzlement.

The last complaint about Paradise Lost was one I had myself, when I’d surged through it on my first reading: that it’s sexist. This is an entirely inappropriate objection to a seventeenth-century poem. Seventeenth-century writers didn’t have the conception of gender politics that we do now in our culture, so it’s daft to go looking for a fight in that department.  Nonetheless, some of you may share my annoyance at finding only one female figure in the poem, if you don’t count the repulsive personification of Lucifer’s daughter in the bowels of Hell. Perhaps archangels are simply without sex or gender. Perhaps senior devils, like Beelzebub and Satan, are only allowed to be male. Let’s just acknowledge that, for Milton, the universe was male. We can, however, find something interesting by looking at Eve herself more closely. She’s utterly innocent and devoted to Adam, her lord and master. She gets to look after the garden while he takes care of the fields. She subordinates her will to Adam’s, does not disagree with him, and only listens to Lucifer’s blandishments when she hasn’t got a wise husband, a careful guardian angel, or a wise deity, to take care of her and make sure she doesn’t disobey what they say. This smacks of infantilisation to me. In many ways, what Lucifer says to Eve is very reasonable, but because she takes no responsibility for herself, she isn’t allowed to be a full human being. Adam takes all the blame for the Fall on himself, because he wasn’t there guarding her while she considered eating the apple. If you don’t allow women the right to be wrong, you don’t give them any rights at all, it seems to me. That’s a feminist statement, if you care to look for it.

One of the great pleasures of reading Paradise Lost is to enter a lost world of pre-Enlightenment thought, with a world-view very different from our own. By being exposed to it so thoroughly, we might find ourselves asking different questions. Was Paradise Lost the first science fiction epic? Was Lucifer the first anti-hero, the protagonist steeped in evil and bad behaviour, but whose essential nobility is too great to ignore? And why is God so, well, so unimpressive, in this poem? Can one write greatness sufficiently when we all know the outcome?