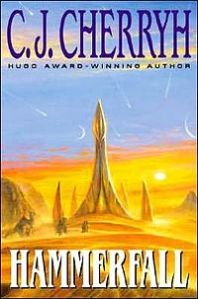 This is the first C J Cherryh novel that I’ve read, and I’m aware that I’m about to step into a sinkhole of opinions about her works. She has published loads of novels, in a tremendous, productive lifetime of writing, and her fans are legion. I admired her story ‘Cassandra’ in Kristine Kathryn Rusch’s anthology Women of Futures Past (2016), so I tried Hammerfall (2001). The first third was good, then it sagged a bit, and then picked up to such an extent that I wasted a perfectly good sunny day gobbling it up, unable to stop myself.

Superficially, Hammerfall shares some similarities with Frank Herbert’s Dune (1965), which I like immensely. I enjoyed the desert environment and plot’s insistence on the rules of water conservation, the threat of attack by wild creatures if you stray into the wrong areas of sand, the tribal codes and social structures, and the closeness of death in a harsh environment. The rule of the Ila, a mysterious benign dictator with white skin and red robes, in her great city of Oburon, is fascinating, since she has extra-worldly powers that enable her to live eternally, and control her household and guards, who in turn ensure that she controls the people of this world. There is something like a power matrix protecting the Ila’s person, and her complete control of the complex tribal and village societies rests on more than personal charisma.

The novel opens with a caravan of the mad being taken under guard to Oburon. The Ila has ordered that all mad people must be collected together and brought to her unharmed, and Marak has been handed over by his disgusted warlord father Tain. His madness gives him visions and seizures, and – more and more – overwhelming him with a voice demanding that the afflicted must travel east, which is into the desert, so obviously this is a suicidal impulse. To be mad is to be cast out from one’s family and tribe, so Marak has no hope as he trudges towards the city and – he assumes – certain death. His only wish is to accomplish his father’s guerrilla campaign against the Ila, and kill her before her guards kill him. This doesn’t work. To Marak’s astonishment, the Ila orders him to lead a caravan east to see what is there. By now his madness is giving him visions of a tower, and flaming spheres falling out of the sky. The Ila wants to know what is happening.

So far, this is a brilliantly imaginative and stimulating scenario. Marak is a strong and believable character, kind, dogged, a born commander, and a good husband, to two of the other mad people in his caravan. He did not intend to collect a wife on this journey, and certainly not two wives, but Hati chose him as her husband, and poor soft mad Norit of Tarsa village as her wife. When a tribeswoman of the an’i Keran takes a husband, he goes with her, along with anyone else of her household. Thus the gender politics in this novel are nicely equalised: the leading protagonist and most important person in the plot is male, but his two wives and his enemy and lord are female, and they deal equally with each other.

The plot is a sequence of journeys: to the city in a caravan of the mad; to the tower in the same caravan but properly escorted and watered; back to the city with a scant handful to warn the Ila and city of an imminent attack by aliens; and back as far to the tower with the entire population of the continent (perhaps I got that bit wrong?) before the apocalypse. (In its saggier moments, this novel seems to be nothing but trudging through sand. My husband got lost there and gave up.)

The tower is a landed spaceship, now a colony on the other side of the continent. The aliens about to attack are fiercely suspicious of the Ila and what she has done to the planet by her gene manipulation, and the apocalypse has to be withstood by the terrified people in canvas tents riding the most wondrous of sf creatures, the beshi: warm-blooded, hairy camel-like burden-carriers and steeds who are absolute darlings compared to their probable gene ancestor, the dromedary. The storms generated by the alien’s planetary assault are terrific, and the dangers lying in wait for travellers along the road are ferociously, efficiently omnivorous.

Cherryh’s invention is tremendous in this novel. The gene manipulation explanations can wash over your head if you just want to enjoy the desert experience and its social intricacies so necessary for survival. I relished so much the details about the importance of the folding of an aifed and orderly arrangement of unrolled sleeping mats in the communal open-sided tents. Most fascinating of all are the au’its, red-robed veiled women who record all that happens in their leather-bound books, writing busily as they ride, eat and watch. They are the Ila’s eyes and ears, and are so sacrosanct no-one even asks them their names. Marak travels with one particular au’it for months, and never knows her name, barely hears her speak, and knows that everything that he does, thinks and says is recorded inexorably in her book. The small practical detail of the carriage of these books – the equivalent of the Ila’s civil service archive for generations – as the city goes on its long march to the tower, is an endearingly human concern that grounds the story amongst Marak’s desperate struggle to keep the caravan moving, the people alive, and their water and food stores intact. Hammerfall is a very good read.