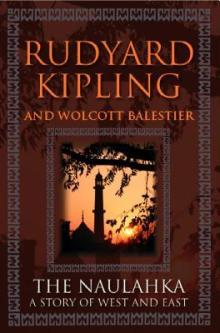 This week in the Really Like This Book podcast scripts catch-up, I plunge into Rudyard Kipling’s least read novel, The Naulahka. It was an absolute joy to read, because it was a rare treat: a novel by one of my favourite authors that I hadn’t already read, despite having been reading Kipling for about 40 years. I simply don’t understand how I’d never read this novel before. It’s not as if it’s a new discovery, or an obscure short story no-one’s reprinted yet. Kipling has been studied intensively in the last 30 years, and there are many editions of his stories and novels available. I’ve even read his The Light That Failed, a thoroughly depressing and gloomy novel that can’t have many fans. But somehow The Naulahka had not crossed my book radar until recently.

It is one of those novels that needs to be read, if not at a sitting, then with a lot of concentration. When I finished it I was still immersed in a part of India I had never read Kipling writing about before, and among characters I had never read him describing. So why all these differences, and obscurities, compared to Kim, and all the Kipling stories I know practically by heart? Because this was a co-written novel, a joint project between Kipling and the man who would have become his brother-in-law if he hadn’t died before the wedding. The involvement of Wolcott Balestier in the novel’s planning and creation has brought out the snobbery in Kipling critics who snoot at his role in The Naulahka’s invention. I picked up a sense that critics excuse Kipling for being saddled with this unfinished novel by his dear friend Wolcott that he obviously never wanted to co-write in the first place.

From the evidence in the early, American section of the novel, Balestier seems to have been developing a writing style and subject in parallel with Willa Cather, one that she would go on to make her own, and which Owen Wister was already exploring. Balestier writes of the American West and frontier life with clear, passionate description, and a practical awareness of the expectations from life of the women who kept the frontier houses clean and fed. But the novel is not about sod houses and shoot-outs, but the civilised life of first-generation frontier towns that already have the furnished houses, the water supply, and the town newspaper, and now want the railroad and mining investment too.

Most importantly for The Naulahka, Balestier’s impetus got Kipling to write a novel about a woman; in fact about three women, and their effect on the American hero, Nick Tarvin. He will chase halfway across the world to steal a fabulous necklace from one woman, to give to another, so that he could marry the third. Kipling didn’t normally write about women very much – Mrs Hauksbee is the only memorable and reused female character in his fiction – and he hardly wrote about contemporary Americans, except an unintelligible arms dealer in two of his South African stories. So I found that The Naulahka, to my great pleasure, has a lot of new territory for Kipling: novel-length female protagonists, an American hero who doesn’t understand the meaning of ‘no’, and the drive and business sense of the American West applied to British India and Rajput cunning. The Naulahka itself is a necklace that is the soul of the state of Gokral Seetarun, consisting of a monstrously-sized emerald, ruby, sapphire, diamond and a black diamond. The traps and mishaps that threaten Nick’s life, by the malice of his enemy the gypsy queen, are excellent reading. The corruption of the Maharajah’s court and the indifferent impotence of the British Resident are fascinating: this is British India written, for once, from a non-British perspective, and it is not complimentary.

There are flaws and annoyances, of course. The central premise of the plot is that the heroine’s desire to dedicate her life to serving the poor women of India as a nurse is a waste of time, because Indian women will not respect her since she has not yet had children. Kate’s true destiny is to be a good wife to the hero: I gritted my teeth through Nick’s self-satisfied assumptions that Kate would eventually come to her senses about this destiny. I shared her outrage on finding that he had travelled to India before she got there on her nursing mission, and that he will not go away and let her do her work. I was increasingly infuriated that Nick lies and deceives to try to steal the Naulahka, and expects Kate to share his triumph in having carried off a spectacular scam. I was horrified that the culmination of his brilliant plotting was that Kate’s life is in danger simply because Nick has tangled with the gypsy queen. Nick is a great creation, but his moral sense is distinctly shabby. One of the great satisfactions at the end of the novel is his realisation that he cannot have everything, no matter how cleverly he has planned things.

One of the strengths of the novel, according to the critics, is the portrait of the very young prince, the Maharaj Kunwar. I’m not sure I agree. Kipling has depicted young Indian boys far better – the small boys in Lucknow in his greatest novel, Kim, are more convincing – and since much of the speech of the Maharaj is in Indianised English, he isn’t his own person, he is a creature of the British Raj. The situations that the Maharaj leads Nick and Kate into, on the other hand, are definitely interesting: power and plotting follow him everywhere, and when he isn’t a protection to them, he’s a danger. Kipling worked out a fiendishly clever plotline to do with the transfer of the necklace, the safety of the prince, and how far the gypsy queen will go to get her revenge. The really refreshing thing about Nick is that he is written in Kipling’s instantly identifiable style, but he isn’t English, and my word, what a difference that makes.

Kipling’s English heroes are all steeped in an awareness of honour – their own, or other people’s – and Nick’s sense of honour is, compared to Kipling’s average British army subaltern, definitely skewed. The two other key women in the novel – the wife of the railway magnate, and the gypsy queen – are also excellent creations, making this novel the most interesting exposure of how Kipling wrote women characters. The railway magnate’s wife has tremendous power, or so we are led to believe, but doesn’t seem to realise the way of the world. If she had actually accepted a necklace of colossal value from Nick, and then tried to persuade her husband to take the railway through Nick’s town instead of through the slightly more suitable rival town, I think we’d all be justified in wondering what else she had offered Nick in exchange for such a magnificent jewel that she has not the wit to appreciate. There’s something wrong with Kipling’s understanding of human nature there, even if the railway magnate’s wife is not interested in Nick.

The only woman to try seducing Nick does it with murder in mind: the gypsy queen is a marvellous creation, and deserves her ascendancy in the corrupt zenana schemings. Kate herself is an unfinished creation. Kipling can’t convey the truth of religious fervour to convince us that her vocation comes from a revivalist meeting, but he is completely persuasive when writing about her grim months of nursing training, and her capacity for hard work in the hospital. I also believe her completely when she continues to urge Nick to just go away and let her get on with her job. It’s maddening that Nick doesn’t listen, and refuses to take her desires seriously when they don’t coincide with his own, but it’s also very modern. While a lot about this novel is great Victorian fiction, there are some highly suggestive elements which make this a thoroughly modern novel of feminist aspiration.

This is a complex novel, a very enjoyable read, and is totally gripping in its last three chapters where Nick and the gypsy queen try to outmanoeuvre each other with hostages and hidden gunmen. It’s vastly underrated, and undeservedly forgotten.

2 thoughts on “The Rudyard Kipling novel no-one ever remembers: The Naulahka”