Was not fond of gravy.

He lived in the odium

Of having discovered sodium

E C Bentley published his first collection of clerihews in 1905, as Biography for Beginners, and in this he was clearly the inspiration for such other classics of amateur history interpretations as 1066 And All That, and the Horrible Histories.He also wrote the first modern detective novel, Trent’s Last Case from 1913, which I am resurrecting now from the Really Like this Book podcast scripts archive. This is an extremely short novel, so slight and thin that I thought I had lost it, and had to find a copy in the library to reread, and then, of course, I found my own copy invisibly crammed against the side of the bookcase. The date of its first publication is also a bit confusing. The blurb on my wartime Penguin paperback edition claims that it was published in 1912, whereas all the critical works that I’ve consulted say 1913. The British Library gives 1913 as its earliest edition, by Thomas Nelson & Sons. I happen to have a copy of a letter by John Buchan to his colleagues at Nelson’s, saying, ‘we really must publish Trent’s Last Case in our one shilling new novels series as it’s a great story, and Bentley could really do with the money right now’. Even if this novel was really published first in 1912, possibly in a fiction magazine, it didn’t reach the public in large quantities until 1913, and that’s what matters. Two films appear to have been made from it, in 1929 and 1952.

It’s a murder mystery, and the leading investigator is an artist and part-time journalist called Philip Trent. This was a period when photographs were still pretty ropey in print, and were heavily touched up by the sub-editors, so while the public preferred to see new-fangled photographs (as the newspaper editor says in the story), the more accurate images came from artists. So Trent draws his sketches and portraits for the paper, paints in oils for pleasure and profit, and does a little investigating on the side. His visual sense is highly developed and he has a flair for investigation and putting together logical deductions. He has worked as a detective before, but we are only told in passing a few brief details of his earlier cases, which tell us more about his prowess as a journalistic investigator than about the mysteries concerned. Very few celebrated fictional detectives of this period arrived in print with nothing on their CV. It does seem to be common practice to give the new detective hero a back story that we never revisit, as it only exists to give us confidence in the detective hero’s abilities.

The combination of newspaper reporter as crime investigator was quite new at this time, since the Holmesian model of the private and brilliant investigator diddling the clumsy police at every step was much more the norm. So Trent is a new kind of detective. He’s also a new kind of character: he has whimsical touches in his banter and mutterings, rather like something Saki’s clever young gentlemen might say. He’s clearly an Edwardian young man about town. But he is not languid, and he is not underemployed. He works for a living, he inhabits Bohemia, in London and in Paris, and the way he speaks in the novel is so modern and up to date, it was still being used by Albert Campion and Lord Peter Wimsey ten years later or more. So that’s two new things about this novel.

The third new thing is the way the story is told, and for this Bentley’s own background as a journalist is responsible. He was in a developing profession, where technology was becoming crucial in the passing and spreading of news. Telephones, telegrams, photographs all existed to give new information as fast as possible. The fastest speeds were increasing rapidly for data transmission, and were just as fast becoming the norm, what people expected. This sense of rapidity as a normal thing in life is reflected in the beginning of the novel, by the flurry of activity in the newspaper office which has become the hub of information gathering about the murder.

This is odd: shouldn’t the police be the ones to coordinate the investigation? Not in this novel: the editor of the Record and the Sun receives all the newest information first; he holds details back and publicises others; he commissions Trent to start the investigation, and Trent reports to him. The police are practically nowhere, and appear to act only as corroborative sources, to confirm what Trent finds out. Trent’s role as chief investigator is accepted without question by the widow and her household, and by the police, because he has been sent by the newspaper. This would absolutely not be the case some ten years later.

Another interesting thing about the way the story is told is that the murdered man is introduced at length for the whole of the first chapter. Now this makes sense: if the reader is to accept the importance of this man’s death, and the importance of his personal power and influence, we need to be persuaded of this at the start by viewing his working practices and his grasp on world affairs. Sigsbee Manderson – what a ridiculous name – is an American magnate, a business potentate, a ruthless operator, and indescribably rich. At the time of his murder he is living in England with his English wife and two male secretaries, but he has enemies, and the world’s financial sanity depends on his actions. So when he dies, Wall Street totters. This is important. 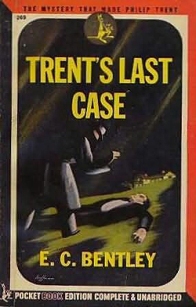 Essentially this is a fine country house murder mystery from the very start of the Golden Age of detective fiction. It is Edwardian, but you’d never think so if it were not for the complete absence of male characters who had served, or not served, in the First World War. In post-war detective fiction this is a common way of indicating a character’s moral quality. Bentley uses different methods. Characters we are expected to sympathise with have steady eyes, have upper-class backgrounds or have been to Oxford, are resolutely honourable, or have an indefinable purity. No character is wasted: this is a very efficient novel, with tight and unobtrusive plotting. Everything that we are told in the narrative is there for a reason and Bentley’s particular skill is in showing us the crucial facts, and then distracting us from them. This happens again and again, so the impact of the barnstorming finish depends on our utter forgetfulness of all that we’ve been told before, so we can go ‘of COURSE’ at the end of the novel, in a very satisfying way.

I also enjoyed the glimpses of Edwardian Bohemia in the novel. Mrs Manderson goes to stay with friends from her salad days when she gets tired of being rich, and positively enjoys eating cheap food, chatting with her girlfriends till all hours and counting the pennies again for nostalgia’s sake. Trent goes to Paris to escape the terrible results of his investigations, and paints madly in a Montmartre studio until he gets news that sends him hurtling back to London by the next boat. Mrs Manderson is a very modern Edwardian woman, hardly corseted at all, in the metaphorical sense, and Trent is a terrific hero. I don’t understand why Bentley did not capitalise on the great success this novel had until some 20 year later. There are two sequels, and at least one of them is a collection of detective short stories. Trent is a lost detective classic, and deserves to be read far more than he is.

One thought on “E C Bentley and Trent’s Last Case”