This Really Like This Book podcast scripts catch-up is about the 1913 novel called Fortitude by Hugh Walpole, and you need fortitude to finish it, to be brutally honest. It is not a snappy two-hour read. On the other hand, if what you’re after is something for a long wet weekend on your own during which you don’t want to go for long walks and the TV reception is bad, this is the book for you. Fortitude is very long, is certainly over-written, but I strongly encourage you to keep reading. It is really very unusual: Cornish Gothic crossed with the Edwardian novel of letters.

It is the 1870s. Peter Westcott is growing up in Cornwall, in a Gothic mansion called the House of Scaw, in a village called Treliss. He is tested by one personal catastrophe after another. His father beats him regularly and refuses to allow him to see his bedridden mother. He is sent away to a brutal school, where his defence of small bullied boys and his resistance to the culture of institutional violence lose the school an important match, in rugby, I think, and make him an outcast. Sport is important in schools, obviously, but I wonder whether Walpole deliberately tips over into satire here. By reporting a particularly violent bully to the headmaster Peter ensures that the bully is expelled, and so the team lose the game because the bully is their best player, and so then the whole school lines up to try to stare Peter out of countenance because, being Head of School, Peter must call the roll, to which no boy will answer. It is a ridiculous scene to today’s sensibilities because it seems so much like the pious excesses of martyrdom more familiar from nearly a hundred years earlier in Tom Brown’s Schooldays. What I do find interesting is that Walpole insisted that Peter rejects success in games in preference for honour and the law. This is a sign of the Edwardian era’s openness to the possibility of rejecting Victorian school brutality.

When Peter leaves school and comes home, he realises with cold horror that his cackling grandfather and demonic violent father are waiting eagerly for him to fall into their bullying, violent, cruel ways. Peter runs off to London and takes a job in a second-hand bookshop. This is a quite a jump in the plot, made possible by the meetings Peter has had in a mysterious junk shop in Treliss, where he encounters the enigmatic, romantic and also mysterious Mr Zanti, who offers him the job. Zanti is a deliberately curious character when he first appears, giving an impression of being all astrakhan coat and dark curling moustaches. He is important because he keeps appearing at all the turns in Peter’s fortunes. Consequently we take him at Peter’s estimation all through the novel: first as a figure of glamour and cosmopolitanism, later as a kind benefactor, then as a hapless victim, and finally as a devoted and loyal friend.

Peter may be ostensibly working in the London bookshop, but he doesn’t seem to do very much except read the books and know instinctively where the cheap classics are shelved. His home life is more interesting, since he boards at Brockett’s, a boarding house full of poor and quaint characters. This is the only positive portrait of a London boarding house that I’ve ever read from this period. Peter works at the bookshop for seven years, boarding at Brockett’s all this time, while he writes his novel.

Peter’s novel is the point of Fortitude, which we are now only a third of the way through (I’d go and get a slice of cake and a cup of tea if I were you). It is a novel of literary life in London as seen by the ingénue writer, which Walpole had recently lived through himself. Fortitude was his fifth novel, succeeding Walpole’s big success, Mr Perrin and Mr Traill from 1911. The plot of Fortitude is about Peter’s development as a writer, how he handles the creative process and his celebrity, balanced against the call of Cornwall and a settling of accounts back at the gloomy House of Scaw.

Fortitude is also the first of what would be later grouped together as Walpole’s eight London novels. London is quite clearly the centre of the known world for Walpole’s characters in this novel, with a range of Dickensian socio-economic and class settings. Walpole also added some pointed portraits of people who might well have been of his friends and acquaintances in the literary London of his own day, including Henry James, of whom he was a protegé. But the London parts of Fortitude begin in the 1890s, so as well as recreating his own early successes from the Edwardian period, Walpole also does a nice job of recreating the society that was withdrawing the hem of its garments from The Yellow Book, ten years earlier. Walpole is writing this novel for insiders and for those who wanted recent literary fashions revisited. 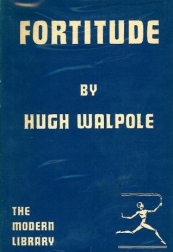 The British critic and author Peter Hitchens wrote, some years ago, “Henry James and John Buchan praised Walpole. Joseph Conrad, T S Eliot and Virginia Woolf were kind about him. What’s more, his books sold enormously well on both sides of the Atlantic, he was knighted, and he became very rich … Yet now he has vanished completely, his books not even to be found on the back shelves of most second hand shops, dismissed as ‘unreadable'”. Walpole was hugely popular in the 1920s and 1930s, but he was mocked in Somerset Maugham’s autobiographical novel Cakes and Ale in 1930, and apparently Walpole did not take criticism well. He became most known for writing novels of Gothic creepiness, and was satirised by detective novelist Francis Iles in the 1936 collection of literary parodies, Parody Party, with a nice episode of everyday ritual murder in an English cathedral town. Fortitude is quite Gothic, but only in the Cornish parts, and in the bookshop of Mr Zanti. In the bright and glittering social life of literary London Walpole writes a tragedy of friendship and disappointed love, all wrapped up with an incessant urge to get back to Cornwall from whence the wellspring of Peter’s creative being lies. Or something like that.

What makes this a true novel of 1913, if you ignore the now timeless Gothic bits and the David Copperfield plot, is the secret socialist circle and the anarchist bomb plot. Anarchism had been fashionable in fiction for some time, and Walpole duly inserts an anarchist episode into Fortitude. Closely linked to the Cornish Gothic is the new fashion for rural extravagance, to be made popular by Mary Webb’s novels The Golden Arrow and Gone to Earth, during the First World War. Walpole expends a great deal of effort establishing the character of the big, muscular, simple and faithful farmer and lovelorn suitor Stephen Brant, who waits and suffers for literally decades while the woman he loves is married to another man. Stephen is Peter’s faithful friend and protector, going to extraordinary lengths to keep him alive in moments of danger, and to bring him news from home. But as soon as the woman is free, she and Stephen hop onto a ship for Canada.

It’s not too far-fetched to read Peter as Stephen’s surrogate child and light of his life. Stephen does a fair amount of raging through the winter fields at sunset, recalling very forcibly the Starkadder brothers in Stella Gibbons’s much later Cold Comfort Farm, but he is out of place in London, even in the poorer quarters. There is a cataclysmic scene when Stephen and Mr Zanti and Peter are playing a riotously enjoyable game of romps with Peter’s baby son, and all seems happy and natural and all boys together, until Peter’s wife opens the nursery door and stands there, glaring icily down at them. She disapproves of them playing with the child at all, and she hates everything about Cornwall and Peter’s former life. Stephen is shrunken by her hatred, and he and Mr Zanti slink out of the door.

So, yes, this wife. I have to say, I found Clare Rossiter, with whom Peter falls blindly and madly in love, a fairly believable character and a loathsome one. Selfish and idle and uneducated, living only for her own amusement, her kind of character is familiar, a spoilt child with no idea how to cope with suffering. Walpole expects his readers to be unforgiving of Clare’s behaviour because she is weak and shallow. She doesn’t have one saving grace or realistically normal feature, except, perhaps, a very powerful fear of having to give birth again. Her one childbirth scene is long and harrowing, but Walpole’s sympathies are all for Peter who has to listen to days of Clare screaming. She is bored by and scared of her baby son, and says and does things pertaining to him that will have all parental hackles raised and sharpened.

I don’t think Walpole knew or cared much about women, or babies. He was, as the obituaries in the quality press say, a confirmed bachelor. Clare is an appalling monster because of her weaknesses and improbable characteristics, whereas her mother is a masterwork of socially-sanctioned monstrous behaviour, who calmly moves into her daughter’s marital home at the first sign of trouble, and never leaves until disaster arrives. Compared to these London ladies, the demonic Gothic horror waiting for Peter when he finally returns to the House of Scaw was always going to be a damp squib. Walpole manipulates our expectations and produces a truly surprising, and oddly satisfying ending to the novel.