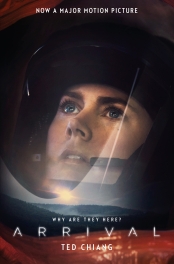 I haven’t seen Arrival, but I wanted to read the book because the story as told to me by someone who had seen the film interested me greatly. I spotted the book in the bookshop because of the Amy-Adams-in-a-­spacesuit cover, and was surprised to see that a whole film had been based on a short story. I’d heard of Ted Chiang, but only vaguely. I’ve finished all the stories in that collection now. Oh my.

Ted Chiang appears to be a polymath. ‘Towers of Babylon’ (a Nebula Award winner) is about Bronze Age architecture that can build a tower to Heaven. ‘Understand’ is about accumulating intelligence and quantitative cognition. ‘Division by Zero’ is about maths, really intimidatingly high-level maths. ‘Story of your life’ (the story the film was made from, and the winner of three awards including a Nebula) is about linguistic theory. ‘Seventy-two letters’ (a Sidewise Award winner) is about two (not one but TWO, darn it) invented pseudo-sciences in an alternative Victorian England. ‘The evolution of human science’ is a three-page short short about how humans can continue to work on science when metahuman science has long since outstripped human understanding. ‘Hell is the absence of God’ relies a little bit on OT theology but is otherwise fairly ground-level sf. It won four awards, including a Nebula and a Hugo: it’s the story I liked least. Hmm. ‘Liking what you see: A documentary’ hauls us right back to the hard stuff by theorising about gnosias that prevent our brains’ perceptions of beauty, and other human things. 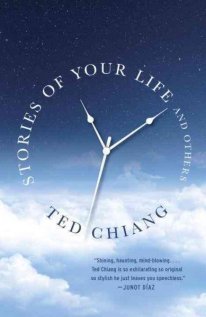 Stories of Your Life and Others (the original title of the collection known as Arrival) will expand your mind relentlessly. The knowledge is only part of it: you don’t have to be a computer scientist to be pulled along by the scientific dilemma in ‘Understand’ because it is utterly human. All the stories are about being human, and dealing with the extraordinary. ‘Story of your life’ is the highlight for me; a perfect, beautiful story, beautiful in how the structure reflects the evolution of the story and what we learn from it as we read (the as-we-read bit is important, because this story is about the accumulative process). ‘Tower of Babylon’ was strange and deeply satisfying, and ‘The evolution of human science’ is a pocket firework.

I have some grumbles. ‘Tower of Babylon’ ignores the economic perspective: if a society is building a tower to reach to heaven, so high that the work continues not for weeks or years but generations, who pays for it? And why is that society, which will presumably be weakened by this constant and unproductive drain on its economy, left unmolested and uninvaded by its neighbours over the years that the building continues? ‘Understand’ ends with a titanic battle between two men: WHY? Why does every opposition have to end in conflict?

However, I was most irritated by the immensely long ‘Seventy-two letters’, which is really a novella, rather than a short story. It is set in Victorian England, and we quickly learn that it is an alt universe Victorian England, in which Robert Stratton learns to reprogram his toy golems to see how rewriting their names will affect their behaviour and refine their design. So far, so very steampunk. He becomes a nomenclator, designing new names to create new functions, and his radical new thinking on automaton design enrages the sculptors who make them by its threats to their livelihoods. Meet the Luddites at the Industrial Revolution. Stratton is asked to join a secret science project which is accelerating the development of homunculi from spermatozoa. This is the second pseudo-science of the story, a form of IVF that combines with the faux-genome mapping of the nomenclators to create a superb milieu of steampunk science without the explosions.

The invented sciences are marvellous and slightly chilling, treading closely on the boundaries of dystopia. But I am annoyed that no-one told Chiang that he can’t write British English dialogue. Both the third-person narrative voice and the ‘English’ characters make blooper after blooper, despite Chiang’s exceptionally good reconstruction of Victorian England. The story might have worked better if he had set it in New York, because then the Americanisms would have been appropriate. But to create an English society so faithfully, and not even posit that it was somehow American-English, and then drop clangers in phrasing, social usage and syntax, is just not good enough. No-one in England, now or 150 years ago, ever talks of a ‘steer’ when they mean a cow. Maybe the narrative voice is supposed to be American (but why?), which would explain why ‘Lionel had Robert wait outside’: no English voice would say that, not now or in the nineteenth century. No school-teacher scientist would address a peer without adding ‘my lord’ at the end of his request. No Victorian peer would drink ‘whiskey’, and he certainly wouldn’t pour it himself.

There are many more maddening small errors, and I’m not including the American spellings. It’s annoying to see detectable mistakes in otherwise brilliant work. If you’re going to recreate England AS England, why not do the job properly, or get someone to check it? But apart from that, I love these stories (most of them) and have joined the legions of Chiang admirers.