I’ve had a bad run of books I didn’t like and books read for work rather than pleasure recently, so all I can offer this week are these three pallid specimens. I’ll try to crank up my enthusiasm next week. It’s the end of term, holiday reading is beckoning, I have hopes of something marvellous waiting for me when I pick up the very next book from the pile. 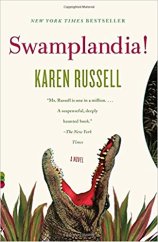 I love Karen Russell’s short stories, in St Lucy’s Home for Girls Raised By Wolves, and Vampires in the Lemon Grove, which I reviewed here, so I bought Swamplandia!, her novel, and have been putting off reading it for over a year. I took it all the way to Hawaii and brought it back unread. Not a good sign. So I went and put myself on a train with nothing but this to read and made myself get through it. It’s not great. Her imagination is stupendous, and her eye for compelling detail creates marvels, but this novel is a short story that has grown beyond its natural capacity for wonder. And I was not entranced: I was bored by halfway through. The central premise of an alligator park in a Florida swamp is solid; Ossie’s romance with a ghost is fascinating and odd; the story of Louis’ swamp-sailing life in the 1920s is a beautiful short short that might have been published somewhere else first, it is so polished and self-contained. I was completely unconvinced by the Chief’s obsession with keeping the park on, and by Kiwi’s passive endurance. Ava the narrator is of course a star, but the red Seth is unused and wasted, like a glowing ember snuffed out by Gothic monstrosity. Too many details, not enough story. 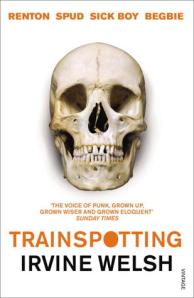 Another novel I put off reading until I absolutely had no choice. I inherited a Modern Scottish Fiction course from a departing colleague, and so I inherited all the novels he had carefully chosen and a course outline he had refined over the years.  Miss Jean Brodie, A Disaffection, Morvern Callar, Lanark, Keep Breathing, they’re all there. And lurking like a malignant toad at the back, was Trainspotting. I read the first half in a gobble of desperation, like a really bad medicine, and felt ill. It vastly enlarged my vocabulary for drug addiction and a truly astonishing collection of words pertaining to the body and its functions, humours, liquids and solids, but did I enjoy it? No. I hated it. I admire its technique and innovation, but I was counting the hours until I could put it back on the high shelf. I wrote my class notes. Reread bits. Cautiously took a peek here and there through the remainder of the novel and read some of the shorter chapters. Revised my class notes. Took the class through the first seminar of the week, and felt some hope. They liked the novel, some of them really liked it, so they did more of the talking than usual. Emboldened, I finished the chapters I’d not read, and we tore through the second session. I had had the brainwave of getting the class to put the book on trial, and my obliging lawyer sister found me Section 5 of the Public Order Act 1986. That went down well, with some strong defences of its scatology, misogyny and the glamorisation of violence. Now I never need read the bloody thing again.

I’ve been meaning to read Larry Niven for years, so I scooped up a copy of Ringworld, hoping for technological wonders. Foolish me. I’d forgotten that the only Niven story I’ve read was ‘Cloak of Anarchy’, which had the futuristic technology I craved, and the slightly dystopic enclosed society, and also the naked girl walking through a park with her cloak hovering behind her, unafraid of sexual assault because of the police surveillance. And then the surveillance stopped, and oh look, assault begins. Ringworld (as far as I read) doesn’t have the assault, but it does seem to revolve around an old man’s seedy, leering gaze on a very young woman’s body in and out of various anonymous and uninteresting parties, and frankly I could not be bothered. Several alien characters, who seemed like tedious blokes in alien suits for all the difference they exhibited in their behaviour or perceptions, exasperated my tolerance for tired 1970s fantasies until I just had to fling Ringworld on the floor. It went to AgeUK last week, and they’re welcome to it.

7 thoughts on “Three disappointments for the dud pile”