This week’s Really Like This Book’s podcast script catch-up is on Geoffrey Trease’s The Crown of Violet (1952), which is set in Ancient Greece, in about 400 BC. Trease should not be confused with Henry Treece, the other English historical novelist of his period filed near him on the shelf. Trease wrote for what we now call Young Adults, Treece wrote for adults, and the differences in their writing put me off reading Treece for decades. There’s a line in Trease’s obituary (he died in 1998) that reports his popularity for generations of British children. ‘There must be many readers whose interest in history was originally fired by reading Trease, and some whose knowledge of Garibaldi or King Alfred comes entirely from reading Follow My Black Plume or Mist over Athelney 30 or 40 years ago.’ That’s me: I was that reader with the Children’s Library ticket who learned about history through historical novels, and happily absorbed all the social and political messages they delivered along with the facts. I only own about six Trease novels, but it wasn’t till I was researching him that I realised that he wrote over 100. That’s a formidable reading challenge.

Geoffrey Trease is famous for having been the first British novelist to write children’s fiction from the points of view of the servants, the working-classes, and the people who had to make their own living. Dawn of the Unread calls him a soft Marxist, and I think that’s about right: gentle socialist instruction, nothing too dialectical. His socialist views were mediated through the stories, but my recollection is that they still endorsed existing hierarchical political and patriarchal systems while allowing the dispossessed to have some agency. Naomi Mitchison, another socialist, did the same for adult historical fiction. Even if powerless teenagers and servants are the protagonists, the power still stays with the powerful. History can’t be changed, but suggesting other options might change the future. 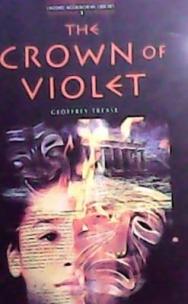 Alexis lives in Athens, and has just left school. He has two years to wait until he can do his military service, so he takes lessons in oratory, he hangs around with the group of young men who listen to that irritating know-it-all street philosopher Socrates, and he starts noticing whispers about a plot to install a dictator in the democratic city-state of Athens. He is also writing a play, but he can’t tell anyone this because boys don’t do this (they’re too inexperienced), and people of his class certainly don’t get involved with the theatre. Once Alexis realises that there is a plot, and that someone has to do something fast to stop it, he puts the plot into his play, to deliver its message that the real enemies of Athens are not the peaceful philosophers, but the stuffy ideas and conservative minds of the men who rule and won’t listen to change. So the novel  and the play are both about the young and untried challenging the old and established, using the subversive methods of Greek comedy to reveal the imagined danger as fear, and to satirise, and thus neutralise, the real threats to democracy.

There is also a certain amount of feminism in the plot that attracted me when I first read this novel, in my teens, because Alexis makes friends with Corinna, a girl he met in the woods, who seems refreshingly unencumbered by the social rules that pin his own sister down.  When Trease was writing it was rare to find girls and women taking an active role in historical adventure novels. Trease was one of the very few historical novelists who would allow a girl and a boy to risk the same dangers and be equally useful in resolving the problem. Since most of history has not allowed girls and women to act like this, his special ingenuity was in finding a way for a girl to have agency without messing around with historical accuracy.

While Alexis is a freeborn Athenian, Corinna is the daughter of a Syracusan inn-keeper and cook. This gives her the freedom to move around the city that Alexis’s sister Nico is denied, but it also means she is fair game for any young blood whose eye she catches. But young readers wouldn’t have noticed that. Trease did a lot to gloss over the sexual economy of Athens that adult readers would have known. Corinna goes out as a flute girl to a party at a mansion that she and Alexis need to infiltrate. Children (myself included) would have thought that this was fairly daring, but safe from detection (the only danger we would have thought about), since Corinna can play the flute very well. But adult readers can see other dangers, for instance in why she refused to wear the transparent gauze dresses that the dancers wear, and why the young lord Hippias particularly wants Corinna to sit on his couch. In another episode, Corinna models for a sculptor as Artemis wearing a short belted tunic. Nothing much is made of this in the story, but the episode raises questions about what she was paid, how much, and what else she did to earn a living outside the inn.

There is also the boys’ relationship. Alexis is best friends with Lucian, although they have a bit of a jealousy spat over Corinna, since Lucian objects to her low origins, and objects to Alexis spending time with anyone else. Their friendship is perfectly straightforward in the 1950s terms that Trease uses, but anyone who had studied Greek and Greek history would known – had Alexis and Lucian been real people –  that their friendship would almost certainly have been homophilic, if not homosexual, and that they would both have been being courted around this time by older men. Since homosexuality in Britain was still illegal in the 1950s, Trease was very careful not to mention these aspects of Greek history in this novel.

I was puzzled about Trease’s historical accuracy: if Corinna and her mother have only just arrived from Syracuse, why would they have been allowed into Athens, since Athens and Syracuse appear to have been at war for the whole of Socrates’s life? I was also wondering about the population of Athens at the time, and Alexis’s sense that Athens is the centre of the world. These were the years of the Peloponnesian Wars, there had been a great plague in Athens near the period of the novel that simply isn’t mentioned, and military security ought to have been a major element in their society. Well, it is, up to a point. The plot that Alexis and Corinna discover is a destabilising one, and the leaders are the right types who threatened Athens in history. But Trease skirts around the details because, for Alexis’s story, they’re not important.

What I found more peculiar – I still really like this novel, by the way, but I am also really enjoying the questions it makes me ask about historical fiction – is the imperative in Alexis’s story that his information about a political plot would have to be believed first by an influential adult who trusted the boy’s veracity, and then automatically sent up to higher authorities who would act on it without checking any of the details. The novel needs dramatic action, so this immediate, unquestioning trust by adults in a boy’s story has to happen to bring about the dramatic climax. But as a civics lesson, even a politicised one, it isn’t remotely realistic. So where does that leave the role of the children’s historical novel: pure entertainment, a scrupulous revisiting of history as we know it, or serving a didactic purpose by changing the details to ignore some things and stress others?

The military aspects of Athenian society are mentioned vaguely, as are the political and the athletic details. But these merely give atmosphere. The real interest of this novel is in the writing of Alexis’s play, what it is for, how Alexis creates it in his head, and how he gets it written down, how it is submitted to the committee for the Spring Festival, accepted under the guise of it being written by his eccentric great-uncle – also an Alexis, son of Leon – and produced by professional actors. Great-uncle Alexis is an expert painter of redware and blackware pots, the kind with the fighting, drinking and running figures going round and round the jar – these were invented at around this time.  Alexis loves watching and reading Euripides’ plays, and his own play is up against one by Aristophanes (possibly one of his less good ones). Those parts of cultural history are completely absorbing, to me and probably to Trease. Writing about writing came easily to this storyteller, I think. The details of how the play was put together on stage, how the choruses move in and out of the action, and how comedy has to include witty, topical speeches to keep the audience laughing: I believed every word of it. I can’t read Greek and I’ve only read Greek tragedy in translation, Greek comedies have rather passed me by. Perhaps I should try them again. And now, of course, I want to read the sequel, The Hills of Varna, about the finding of Alexis’s play in a medieval monastery: one I somehow missed in my childhood.

For more on fictions that history tell us, and the history we learn from fiction, have a look at the Journal of Historical Fictions, a free online scholarly journal.