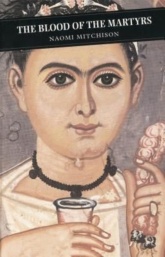 This time, in the Really Like This Book podcast scripts catch-up, I’m in Ancient Rome, rereading Naomi Mitchison’s excellent novel about very early Christians in the reign of the Emperor Nero, The Blood of the Martyrs, from 1939. You can probably guess the ending already from the clues in the title, but, trust me: it may be a weepy, but it is an outstanding philosophical and theological thriller. It’s set around the beginnings of the Pisonian conspiracy of AD65, which tried but failed to assassinate Nero. The novel’s main protagonists have no idea that a plot is being hatched, because they’re mostly slaves or Romans struggling to earn enough to eat, and the real-life plot only emerges when the main plot of the novel is thundering to its climax.

It’s typical of Naomi Mitchison’s fiction to concentrate on the lives and ambitions of the working-classes and those without power. She was a Scottish socialist novelist who first began to be published in the 1920s and 1930s, and who died in 1999. She published over 90 books, and is most famous for her epic novel The Corn King and the Spring Queen (1931), which was about prehistoric fertility rites in Anatolia, heavily influenced by J G Frazer’s The Golden Bough, and Jane Harrison’s pioneering studies of classical Greek myth and religion. Mitchison took research seriously. She wrote many novels set in prehistory and early classical and Roman history, and was a pioneer in using a pure and undateable vocabulary spoken in a modern style so her characters sound unalienatingly familiar. No hists and thous for her: her Roman matron chatters like an English society lady of the 1930s, and figures from the New Testament sound like normal people.

This plot is about slaves and the very poor in Rome who are or who have become Christian, and are struggling to maintain their tiny Churches in an increasing atmosphere of suspicion. The economy of the Roman Empire is based on slave labour, and must continually acquire more slaves to replace those who die from starvation and ill-treatment. Slaves are not considered to be human, though some of their more benign masters, such as Flavius Crispus in the novel, do see the benefit of treating their property with care to have a better return for their investment in long-term service. Sometimes the worn-out slaves who can no longer carry a litter, say, or who have lost a hand in an accident, are not thrown out or sold, but given light work or retired to the family farm as a useful labourer. But most slaves get sold again once they’ve outlived their use to one master.

Another category of non-Roman citizen were the captured children of enemy nobles, who were brought up as fosterlings in nice Roman homes, until the day came when they needed to be put out of the way, perhaps into the army, or married off to someone who would be grateful. The novel begins in a sultry post-coital scene between Beric, a captive Gaulish prince who has grown up in the house of Flavius Crispus, who has just been doing what he’s been told to by his foster sister Flavia, a beautiful, spoiled and very nasty young woman, who hasn’t yet told the besotted Beric about her betrothal, to be announced that evening. Thus the novel begins with an uneven demonstration of power, between the Roman citizen and the non-citizen, between the emotionally cold and the hopelessly dreamy, and between a young woman with a very assured manner and young man who doesn’t know how shaky the certainties of his life are becoming. We can sense his vulnerability right from the first page, and can tell that things are not going to go well.

As Flavius’s de facto son, Beric runs the house for him, and manages the slaves. But once she’s established his life for us, Mitchison changes tack and begins to tell another story, of Manasses and Josias who were captured in a raid, and grew up as slaves in Rome. Their father had known Jesus’s younger brother James, so they were brought up as Christians, and by luck have managed to find other Christians while in captivity. In a third chapter we hear about a beautiful Persian girl born into slavery and taken from her mother (that’s the second girl the poor woman has lost) when she’s old enough to sell. She becomes Flavia’s newest and most tortured maid. And so on. Each chapter in the first half of the novel puts you inside the experience of sixteen slaves or freedmen and women, and gives you their stories in their own words or from their perspective. This technique of multiple voices isn’t nearly as confusing as you think it might be because Mitchison’s control of her material is absolute, and very subtle.

Reading these chapters, and learning how each story fits into the others, and how their tiny Church grew, is a bit like walking around the outside of a building with many windows. Each time you look through a window, or read a chapter, you see characters you’ve already met, or will meet, doing something slightly different or new or in the past or future, so that the composite picture becomes more detailed, and more nuanced. Some of the characters are already Christian when they arrive in Rome; others become convinced that Jesus’s words are for them, to give them something to live for. It’s quite acceptable at this point in the story to look out a New Testament, to read Paul’s letters to the Romans, to the Corinthians, to the Galatians, Ephesians, Colossians, Thessalonians, Timothy, Titus and Philemon. The tiny group of worshippers that Manasses serves as its deacon is the kind of Church that St Paul was supporting by letters on his travels. He’s in the novel too, in Part Three, when they’re all waiting for the lions, but we’ll get to that.

Every narrative voice in the novel belongs to a character. There is no third-person omniscient narrator, no authorial voice who knows more than the characters or the readers. It’s an egalitarian way to tell a story, which fits beautifully with the Christian ethos that the story illustrates, that everyone is equal and that every person is as important as each other. It’s also a technical tour de force, brilliantly executed, because it’s hard to spot the seamless change in perspectives from one character to another, when – zip – you’re out of Eunice’s bakery and back into Crispus’s house, or into the cellar where the Church meets to worship and receive strength from their beliefs.  For a 1930s novel it is also egalitarian in gender and sexuality. Some characters love each other and happen to be men, and also love women: later fans of Mary Renault would have appreciated the delicacy of Mitchison’s touch, who wrote this novel when homosexuality was still illegal in Britain. Women too have equal status in the Church. A dancing girl called Lalage is a deacon alongside Manasses, because those who are strongest in the spirit become leaders, and she is strong.

When Beric is suffering most from the crumbling of his world’s foundations, he becomes aware that some of the slaves that he commands in Crispus’s household have some kind of belief that gives them strength. He joins their Church just as Nero arranges for some areas of Rome to be set on fire to clear the way for his latest architectural experiments. The blame for the fire falls on the Christians, who are enthusiastically rounded up by Praetorian chief Tigellinus, who is also seducing Flavia, now that she is a safely married and under-occupied woman. One by one the members of this small Church are arrested, beaten up, released, and then arrested again, because Nero and Tigellinus want to please the Roman crowds with a really spectacular Games, featuring burning women, chariot races, Christians and wild beasts and animal hunts. Other Churches exist in Rome as well as Manasses’ Church, but they are widely scattered, and rightly cautious about making contact in case they are betrayed by a smiling stranger. The novel ushers or pulls all the characters towards the Coliseum, some of them towards the spectator seats, and some of them towards the cells as the entertainment.

I mentioned that The Blood of the Martyrs is a philosophical and theological thriller. Many of the conversations are between characters trying to explain to each other what Christianity is, and what you do when you are one. In the third part of the novel Paul is in prison with the other characters, and is arguing with them about what needs to be done, and how baptism should be performed. He dictates his letters to other churches to Luke, the doctor who does his best for the prisoners after their torture, but really there is very little he can do for a raped woman who is about to be torn apart by tigers. Stoics and Epicurian characters are also present in the prison, political prisoners lofty in the knowledge that their intellectually superior beliefs do not let them in for such degrading and brutal treatment. But they are shaken by their inability to watch another person suffer and remain unmoved.  By witnessing the deaths in the arena, people begin to be converted, and the seed of belief is transmitted by example and by loving kindness. It is a very moving image, drenched with sadness.

Underneath these small stories is our historical awareness of the Christian church at its beginnings, and of the other faiths prospering in Rome at the same time. The Roman Jews do not receive the persecution meted out to the Christians, but when Mitchison was writing this novel, the Jews were being persecuted mercilessly in Nazi Germany, and worse was to come. It’s pretty clear that Mitchison intended this novel to be read as a parable for the contemporary persecution of the Jews as well.

When I began to reread The Blood of the Martyrs I knew that I had not carried it with me through countless house moves for nothing: it is a marvellous, gripping read. But I also knew why I had not wanted to reread it for over twenty years; it is desperately sad, and full of tragic moments you can see coming, agonisingly, several pages off. Find your handkerchief.

2 thoughts on “Naomi Mitchison’s The Blood of the Martyrs”