Skip to content
Kate 20thC, architecture, art, community life, history, nature, passion and secrets, political / social commentary, Sylvia Townsend Warner, the life of the times, Why I Really Like This Book May 22, 2017August 15, 2017

This time in the Really Like This Book podcast scripts catch-up I’m in the fourteenth century, immersed in a muddy Norfolk field at the medieval nunnery of Oby. The Corner That Held Them (1948) is a most peculiar and very readable novel by Sylvia Townsend Warner, author of the immortal Lolly Willowes. The Corner That Held Them is a fictionalisation of history, with no heroes and no heroines, and the protagonists jog slowly past our field of vision as we move from the twelfth century through the thirteenth, into the fourteenth. We meet five prioresses, four bishops, one custos (or convent business manager, in modern parlance), and one priest with a rather important secret that has become a nunnery tall tale since he revealed it inadvertently in the throes of a fever, thinking he was dying. Naturally none of the nuns believe him.

The plot, such as it is, begins with how this nunnery was founded. It was built in the memory of Alianor, the dead wife of Brian de Retteville, whom we first meet in bed, just before her lover is killed by her husband. After this rather big life event she has some children and then dies, and – most inexplicably – her angry and resentful husband is full of grief, and decides to build a nunnery, into which he can put their two sickly and uninteresting daughters. The nuns are installed, and get on with praying for the souls of the de Rettevilles, and inhabit the land for the glory of God. Their lives consist of small beer and minor irritations which Warner passes through so smoothly, telling the passing of the years where nothing much happens. There’s a murder, and much political second-guessing in the elections for the next prioress.  Nuns have to wait for each other to die before they can change their office to be given work that is more congenial, or less awful. Small acts of kindness are rare, and the acts of ignorance and stupidity are many: this was not an educated period for anyone in England, so actions taken through lack of knowledge and understanding are very influential.

This is such an engrossing novel because it reads as if history is just unrolling in front of you. In my day job I’ve been using a very good recent study of the historical novel as a genre, by Jerome De Groot, that makes several observations very helpful for thinking about this novel. The first one is that the historical novel consciously hoodwinks the reader, we have to agree to be bamboozled into thinking that all this really happened, when really the author is making all of the story up. She’s not making up the history parts, we’re happy to believe the background details as fact. But weaving the fiction of what one character said to another and what they felt about that thing happening: that’s the fiction to blend seamlessly into the history. The reader thinks that the total invention presented as history is real because the fiction slides into our consciousness under the guarantee of the history; it’s a covert act against our rational understanding that we allow.

Another thing he talks about is the growth of the historical romance. The Corner That Held Them is not a historical romance, since there is no romance, no fantastical quest, no romantic love story, no urgent need for emotional satisfaction carried over for hundreds of pages to end in a tidy conclusive ending a few lines before the typing stops. The Corner That Held Them is about how history happens and what the nuns think about the bits of history happening that they notice. They notice rents not being paid so much, and don’t really know what to do about this. They are terrified, with good reason, of the fourteenth-century bands of robbers that prey on isolated monasteries, so they send off their valuable altar vessels for the bailiff to bury, which he does, and then he dies. In one of the most magical parts of the narrative (it’s really not a story), the convent’s custos Henry Yellowlees stays the night at a leper hospital, on an errand for the nuns. The chaplain shows him some remarkable new music, Ars Nova, which is the new polyphony, multivocal music that twines and winds the voices around each other: listen to this by Thomas Tallis and you’ll get the idea. Polyphony was banished from the Catholic Liturgy by Pope John XII in 1322, but fifty years later is being sung with rapture by a priest, a clerk and a leper, in this novel. 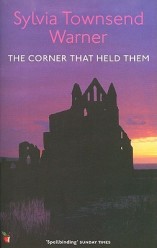 In another episode of unexpected emotional pleasure, Sir Ralph the priest goes in search of a hawk (since all medieval priests may fly a hawk as a symbol of their gentility). He meets the recently widowed Dame of Brocton who wants to read him the Lay of Mamillion, which her young husband, recently dead, had composed. This is Sir Ralph’s first encounter with medieval literature, and from the snatches Warner invents for our entertainment it seems to be very like Gawain and the Green Knight, thought to have been written around this time. Thus important developments in English art are connected to the history of this nunnery, but the nuns themselves, being enclosed and very wary of change, don’t know anything about them.

The story (which it isn’t) leaves loose ends dangling like a fraying skirt hem. Dame Adela runs away from the nunnery, and goes to sea with Annis the prostitute: what has happened to the valuable new altar embroidery? We don’t see what is important and what is not important. Take this example: Sir Ralph leaves his room, and (I quote) ‘a brimstone butterfly fluttered into the room’. I had that butterfly at the back of my mind for most of the rest of the novel, but nothing seemed to happen to make it important, so I forgot it. But, in her introduction to the Virago reprint of the novel, Claire Harman points out that simply by making us notice that a butterfly came into the room, and then doing nothing with it, Warner was teasing the readers by pointing out that this was one convention of tidy story-telling that she was not going to obey. Nowadays, officious editors will point out to the anxious author that the butterfly has to be tidied up and made important, please, otherwise why mention it? Things happen and aren’t necessarily important, because, what is important in a life? That’s what this novel is about. For the joy of invention, for the pleasure of leaving an untidy ending. To show that no-one really notices butterflies in real life.

In a way, The Corner That Held Them is more like the ‘naturalist realism’ of the nineteenth-century historical novel, which was as plain and historically accountable as it could be, to be real, and natural. Warner’s interjections and abrupt summaries of a year – ‘In 1208 came the Interdict. In 1223 lightning set fire to the granary’ –  sound very like proper medieval chronicles, when there wasn’t very much to remember, or nothing much happened that was important enough to write, on calfskin vellum, which was expensive. The same thing happens to the nuns’ collective memory. They can only work out when the daylight owl began to hoot by thinking back to other events: when the pear-tree blossomed, when the refectory was whitewashed, when Dame Amy had a whitlow. They know about Sundays, but every other day flows past in a nameless stream. This vagueness anchored with memorable events is a familiar habit, we all think of our own personal histories like this. But when history goes into a written narrative, it can do two things. It can become the kind of historical fiction called the ‘felt past’, in which the emotions of characters are up front and palpable, the history illustrating their story of love, or adventure, or revenge.

The Corner That Held Them is not one of those. It’s a historical novel in the school of the ‘recovered past’, when the past is the subject, and history is more important than story. It’s also a women’s view of history, a new way of thinking about how history was written that was developed in the early twentieth century, according to Diana Wallace who studies the historical novel. Sylvia Townsend Warner was one of many women writers who redirected the attention of the readers of historical novels to what ordinary lives and ordinary women might have seen, felt, thought or done. Nineteenth-century historical fiction was full of action, drama, high romance, epic adventure, all tough, showy, strong manly stuff, and always fighting. If women appeared in those novels, they were the prizes, or hostages, or useful cleaners and cooks and moppers-up of the heroic blood, backstage. Women’s historical fiction was about the lives of women in history, which could certainly be vague and nameless and undistinguished, just as their lives could be magnificent and heroic and devious and brutal. All of these appear in characters in The Corner That Held Them. It’s a wonderful novel, and a wonderful dip into the unknown muddy stream we call the twelfth, and thirteenth, and fourteenth centuries, somewhere in the east of England.

Hilary from Vulpes Libris also reviewed this recently: check and see if you agree with her reading.

12 thoughts on “Sylvia Townsend Warner: The Corner That Held Them”