I was in two minds about this book all the way through, and I’m still unclear how I feel about it. It’s certainly compelling, but it is three stories bundled into one narrative, and sold under the bookshelf-friendly title of yet another memoir from the Sackville-West / Nicolson dynasty. (The full title, A House Full of Daughters. Seven Generations. One Extraordinary Family rather forces this aspect on the reader.) It uses the Nicolson surname to suggest that the author is a literary personality (this memoir is her fourth publication) who wants her life to be interesting to the public, like that of her father Nigel Nicolson, the former Member of Parliament and co-founder of Weidenfeld & Nicolson, and possibly also of her brother Adam Nicolson the historian, about whose books I have written here, and here. A House Full of Daughters is also a personal memoir, of the callousness of the English upper-classes when they are really selfish. Thus if you are looking for Bloomsbury spin-off material you’ll be disappointed, though it is rich in Sissinghurstiana, and unhappy rich people’s lives.

The three intertwined stories are: (1) yet more details from the Sackville-West / Nicolson history, (2) the chilly upbringing and tragic life of the author’s mother, Philippa Tennyson d’Eyncourt, and (3) Nicolson’s own story of how she and her mother both battled loneliness and alcoholism in their otherwise comfortable lives. The subtitle tells us that the memoir is about seven generations: Catalina, Pepita, Victoria, Vita, then Vita’s daughter-in-law Philippa, and her daughter Juliet, and Juliet’s two daughters. As an act of recovery of women’s lives in the twentieth century this book is undeniably interesting, but the lives of Catalina Duran and Pepita de Oliva in nineteenth-century Spain have been covered already, as Vita Sackville-West’s forebears, and Victoria and Vita Sackville-West are well-studied figures. The views and experiences of the seventh generation, Juliet’s two daughters, are barely mentioned, and they do not fit into the rather artificial framework that Nicolson creates around what she calls the ‘bargains’ that the six earlier women made with their husbands or fathers to gain the lives they wanted.

These ‘bargains’ are hardly a new phenomenon: women living in a patriarchy have always had to bargain with their bodies and domestic service to make their lives work out as best they can. For this memoir, access to surviving documentation is the real value (though I’d like to know where Nicolson found the intimate thoughts and feelings of her otherwise totally obscure Spanish great-great-great grandmother). The very private family documents that Nicolson quotes from, for example, that reveal the details of her great-grandparents’ exuberant sex life, are indeed a privilege to read, because Nicolson (with her brother) is the administrator of the estate. By using her access to reveal more of the Sackville-West / Nicolson story, Juliet Nicolson does an excellent job of conveying the human predicament of an Edwardian first-time mother determined never to be pregnant again, and of the ‘sexual desertion’ of the young husband suddenly denied access to his wife in every way.

Two generations later, Nicolson deals with her appalling grandparents, Sir Gervaise and Lady Tennyson-D’Eyncourt, most impressively. They were rich, with several homes, but wealth and comfort do not improve a naturally cold temperament. Nicolson describes her grandmother judiciously as unloving: ‘disapproval and contempt were Pamela’s default settings … She was wholly unhuggable and in her own way just as unmaternal as Vita’. I don’t agree that Nicolson’s mother Philippa was born ‘at a bad time to be a daughter’, since millions of other girls her age had wonderful lives. It’s obvious that Philippa was born into a family that didn’t want a daughter, and she suffered accordingly, expected to exist until marriage like every other girl of her class. It was Love in a Cold Climate in real life, but without the loving support of friends and a large family: after she finished school, the poor girl was completely isolated, and seems to have had no inner resources of her own. Philippa then had the additional bad luck of marrying the charmingly selfish Nigel Nicolson MP who wanted a wife to keep his parliamentary constituents happy, and didn’t have any other use for her. When a daughter writes so critically of her parents, and of her grandparents (Harold Nicolson seems to have been the only grandparent of the four who knew how to be nice to people), the effect is startling. The accounts of Philippa’s miseries, and of the scourge of tuberculosis in her life and in her mother’s life also, reflect horrible English class cruelties deriving completely from their privileged setting. 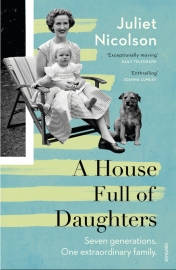 The last story is the very personal one of Juliet Nicolson’s life to date, and dwells on her loving relationship with her father (who seems to have manipulated her just as he did her mother) and her rejection of her mother in favour of the Sissinghurst connection. It is heartfelt, and not comfortable reading. I am also uncomfortable with the way Nicolson joins her own life’s details to the historically documented and well-published accounts of her forebears’ lives, since one will automatically expect comparable accomplishments and achievements, not just a connection by birth. But Nicolson does not inform us about any of her own writing, we hear almost nothing about her professional life, and far too much about her emotional travails, which have meaning only for her personal circle.

The value of this strand of the narrative is in how Nicolson’s life’s trajectory was similar to and yet differed from that of her mother, and how they both dealt with feelings of inadequacy and rejection through alcohol. This story doesn’t depend on who the protagonists are: it would be equally compelling as the story of total unknowns. Their story is about strength of character, the efforts of friends and family that did and did not help them, and why one woman died by her wilful destruction of her liver, and the other decided to survive after a final intervention that made a difference. We don’t need names, or family privilege, or the earlier, celebrated generations, to value this part of the memoir as it deserves. The effect is a patchwork of biography, that reduces its impact of its most meaningful aspects.

One thought on “A House Full of Daughters, by Juliet Nicolson”