New Writing, John Lehmann’s influential British literary magazine, first appeared in 1936, and fostered politically Left writers and artists. It stopped publication in 1950, with issue 40, just as Tennessee Williams and John Wain (for example) joined the contributors. I found issues 27 to 40 in an Oxfam shop, and bought them for a fiver. I’ll be reviewing each issue: follow the links at the bottom of this post for the other issues.

Issue 27 was the first issue to be published after the Second World War. The design was changed: new format, new typography, new paper, new picture-cover, new colour inset.  Lehmann wrote a short but exuberant Foreword celebrating the magazine’s survival, and welcoming old and new contributors and readers. He is particularly nice about contributors’ patience, reliability and loyalty, and he is grateful to the readers who write to tell him what they liked and didn’t like. And there is a joyous outpouring of snark:

A special bouquet must go to the military gentleman (retired) who burnt us in his back garden in 1941 as German propaganda; to the German censor who refused us entry into the POW camps as Bolshevist propaganda; and to the unknown gentleman on the ‘bus who said we were the best British propaganda. Nor can we omit Mr James Agate, who obliges so unfailingly by finding us too highbrow for him, or Miss Olivia Manning of Jerusalem , who, like our little spaniel bitch Carlotta, gets her teeth into us whenever she finds us lying about.

James Agate had been a leading literary and theatrical critic for the daily and weekly press since the 1920s, so was a fixture on the scene that Lehmann couldn’t do anything about. I admire tremendously (but do not condone) the way Lehmann innocently puts ‘bitch’ and ‘Miss Olivia Manning’ into the same sentence, almost the same line. 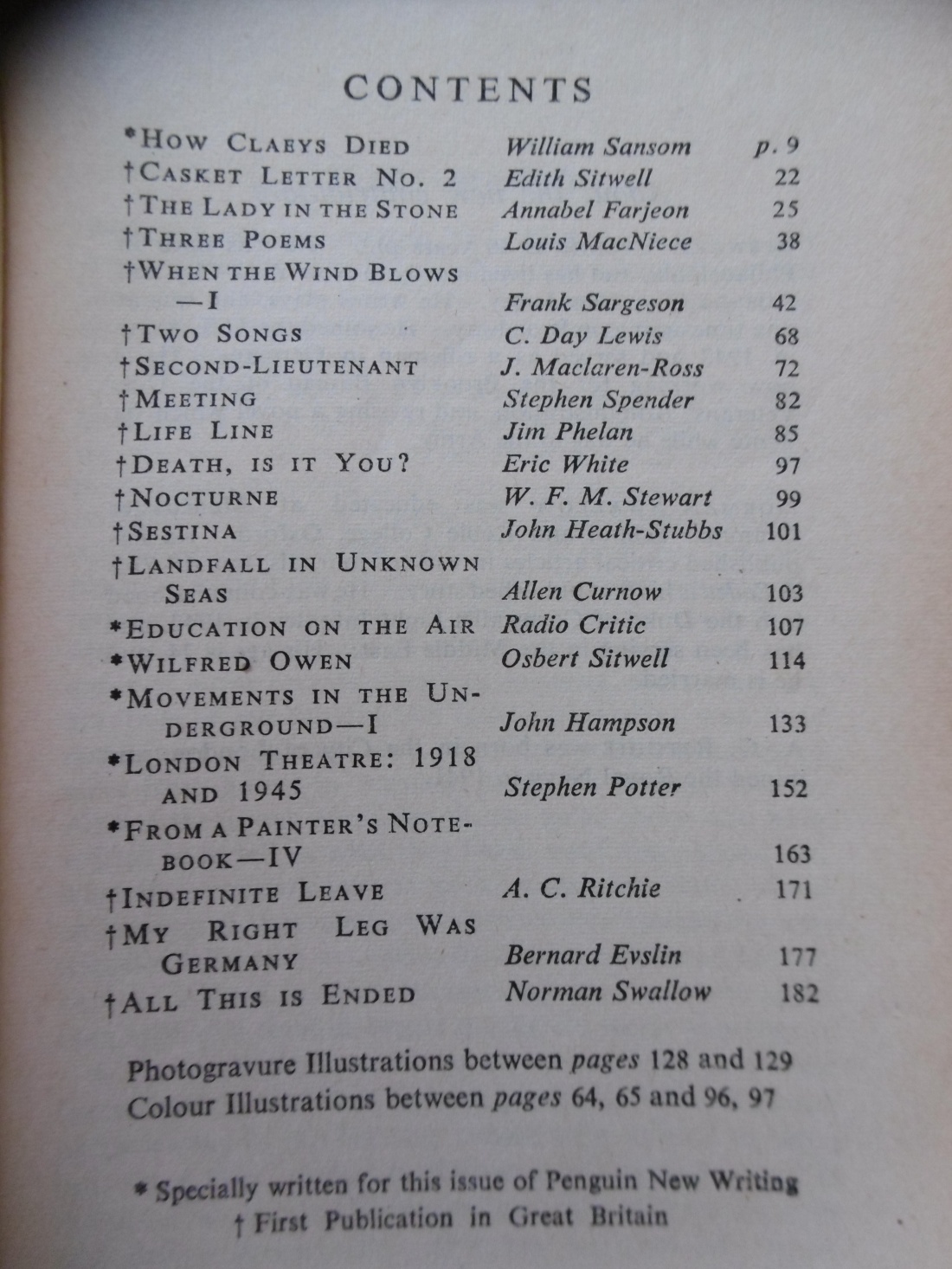 You can see from the contents page that a great deal of the material was published in New Writing for the first time in the UK. Some were absolute standouts for me.

‘How Claeys died’, William Sansom’s dark story of an oblivious Belgian civilian touring post-war Germany, showing off his language skills. One of the many pieces in this issue that dwell on the aftermath of the war as a test of endurance, and festering tension.

‘Second-Lieutenant Lewis’, J Maclaren-Ross’s account of meeting Alun Lewis in camp, and how they maintained their friendship as writers and civilised men despite the military apparatus that regarded them with deep suspicion, since they continually broke the rules on inter-rank fraternisation.

‘Life Line’, by Jim Phelan – a remarkable Irish writer who lived a nomadic ‘tramping’ life – is a compelling but slight story, ostensibly about turf-cutting in an Irish peat bog, but is also about paternal expectations, the options for an adolescent’s escape, and the difference one child can make to a family’s economic survival.

‘Radio Critic’ reviews recent radio and media gossip from the past 6 months, and is an excellent corollary to other contemporary radio criticism, in The Listener and in Time and Tide, for example, if you’re interested in such things.

Osbert Sitwell’s long essay on Wilfred Owen is tremendous, and very Sitwellian: a rare resource for Owen scholars that apparently isn’t easy to find. I can send a pdf scan if you want it. 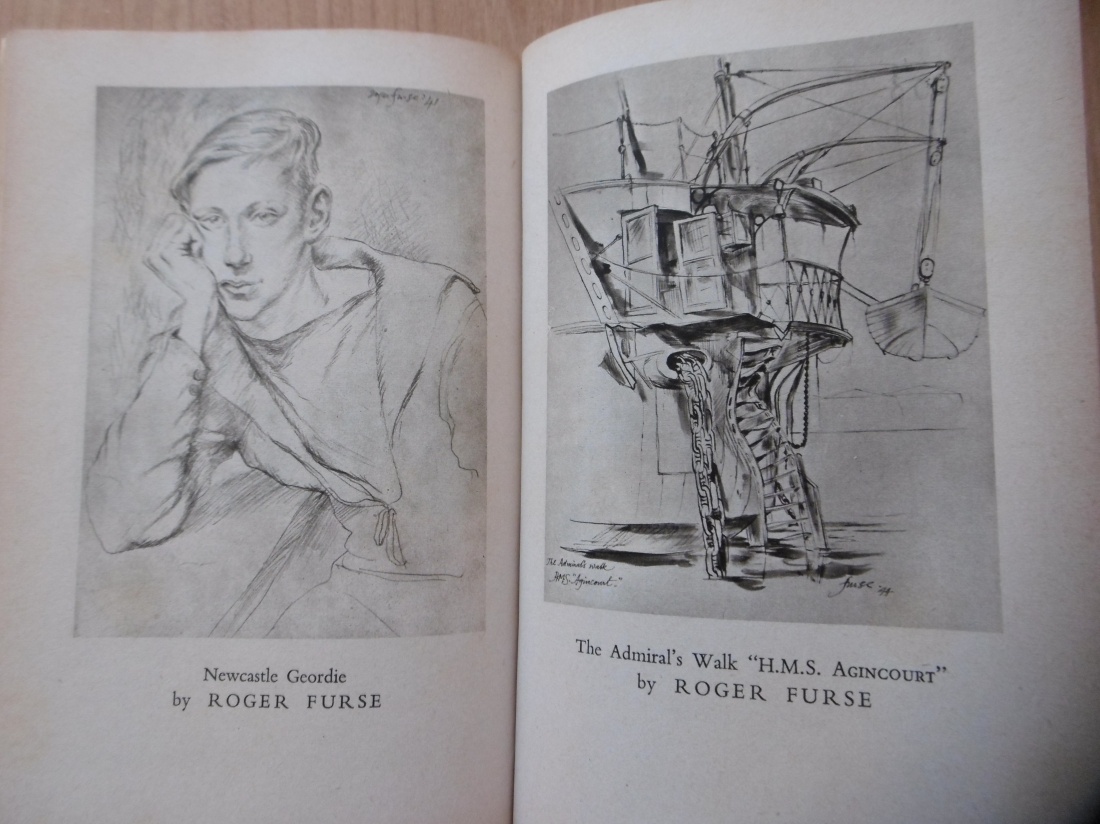 Roger Furse’s drawings, of ‘Newcastle Geordie’ in a sailor’s uniform, and ‘The Admiral’s Walk HMS Agincourt’: the detail of the crazy twisted staircase, the massive anchor chain and the lifeboat suspended from spindly metal arms remind me of illustrations by Mervyn Peake (Titus Groan was also published in 1946).

Sculptures by Gordon Herickx. On looking him up I see that he taught at Walsall School of Art, destroyed any of his work he considered imperfect, died the day after the opening of his first solo show, and that he was put into a poem by Louis MacNeice. There’s a LOT of scope for a thoroughly dreary masculine middlebrow novel there.

John Melville’s portrait of Henry Reed, one of the very few British poets of the war to be regularly anthologised. His ‘The naming of parts’ from Lessons of the War is a superb satire on military education and killing.

John Hampson’s Movements in the Underground 1: this is the first of a two part study on books and authors that your mother wouldn’t like, from Oscar Wilde onwards. Hampson was the author of Saturday Night at the Greyhound (1931), one of a group of Birmingham artists and writers (see also Melville and Herickx) who depicted working-class life. This survey is revealing evidence of what was considered socially and morally contentious in the 1940s, and why. Many interesting titles for the curious to research in the privacy of their own browser.

‘My right leg was Germany’ by Bernard Evslin is a compelling short story from a hospital ward full of amputees. It’s an early extract from a novel then in progress by this American author, who is now best known as a playwright and screenwriter, largely told in dialogue or first-person narrative. I see Emmet hitch himself out of bed and hump toward the latrine.  He always manages to get out of the ward when Carruthers’ dressing is to be changed.

‘All this is ended’ by Norman Swallow is his first short story, an account of the obliteration of the battalion, told with a shocking combination of immediacy and neutrality, moving in an unsettling way from personal stories to impersonal reportage. Swallow became a leading documentary film-maker and editor for the BBC.

There isn’t much representation of women in this issue (I didn’t like the Farjeon story so didn’t mention it), so I’ll be keeping an eye on that, as well as looking for how the war maintained a presence in the magazine as it drew further away in time.