This issue of Penguin New Writing, from spring 1947, has a depth that the previous issues reviewed don’t seem to have achieved. John Lehmann goes all-out in his Foreword by saying that the fires that decimated London’s publishing offices and warehouses in the bombing in December 1940 did ‘the book-trade — and the authors who live from it — a notable service; it cleared off hundreds of thousands of third-rate books that had been clogging the market for years, and led to an astounding revival in sales for the intelligent novelist and critic’.

This is a fairly astonishing iconoclastic stance: booksellers and book historians have universally regretted the losses of archives, editions and plates in those fires, so it is bracing, and rather challenging, to read Lehmann expressing relief only a few years later that because of the need for new books ‘British booksellers no longer turned a lacklustre eye upon the so-called “highbrow” author’. Lehmann’s idea of such ‘highbrow’ survivals is disputable: ‘the kind of author whose work lives and is read when all the best-sellers of the day have been swirled away in Lethe’s waters’. He then ventures to hope that the present issue will be rich in this quality.

Looking at the contents page, Lehmann’s roster of ‘highbrows’ does indeed contain a slightly higher number of authors who are still being read, or have a recognisable name, in 2017: Graham Greene, Louis MacNeice, Boris Pasternak, V S Pritchett and John Lehmann himself. Others might be for specialists only, but they are still known, some of them even in print: Julian Maclaren-Ross, Henry Reed, Donagh MacDonagh, Tom Hopkinson (for his journalism) and Norman Nicholson. But so many of these names are poets, and only Greene (possibly also Pasternak for one famous novel) could ever be described as a best-seller.

However, let us not wallow in the hubris of 1947, but enjoy what it had to offer. Julian Maclaren-Ross’s piece of memoir, ‘Monsieur Félix’, is about beggars, exploring Marseilles as a child, and a master of Grand Guignol. Maclaren-Ross is better than a raconteur, he’s an artist in description who pulls you in. It doesn’t matter that this short piece may or may not be complete invention, it is story, good and proper.

Tom Hopkinson, more famous for his editorship of Picture Post and championing of documentary photographer Bert Hardy, ‘wrote several novels’ according to his online record. This is one of the most accomplished and readable short stories so far read in Penguin New Writing, a thriller crossed with a seduction narrative, and a masterclass in story construction.

Graham Greene’s ‘Across the Border’ is advertised as ‘an unfinished novel’. Not knowing his oeuvre well, I don’t know if this fragment was reused after 1947 by adding it to something else to become a real full-length novel. It’s certainly gripping, and drenched with anticipatory misery. A weak good man returns from a mining enterprise in Africa to report the evils wrought by his superior, to find that the company doesn’t care because they have faith in the bad man. And then we backtrack to read exactly how the bad the bad man is, and how weak and corrupt the whole bally enterprise is too. Is it classic Greene? It’s certainly grim, and would have been eminently expandable, had the war not intervened to wreck this world of 1930s colonial extortion. 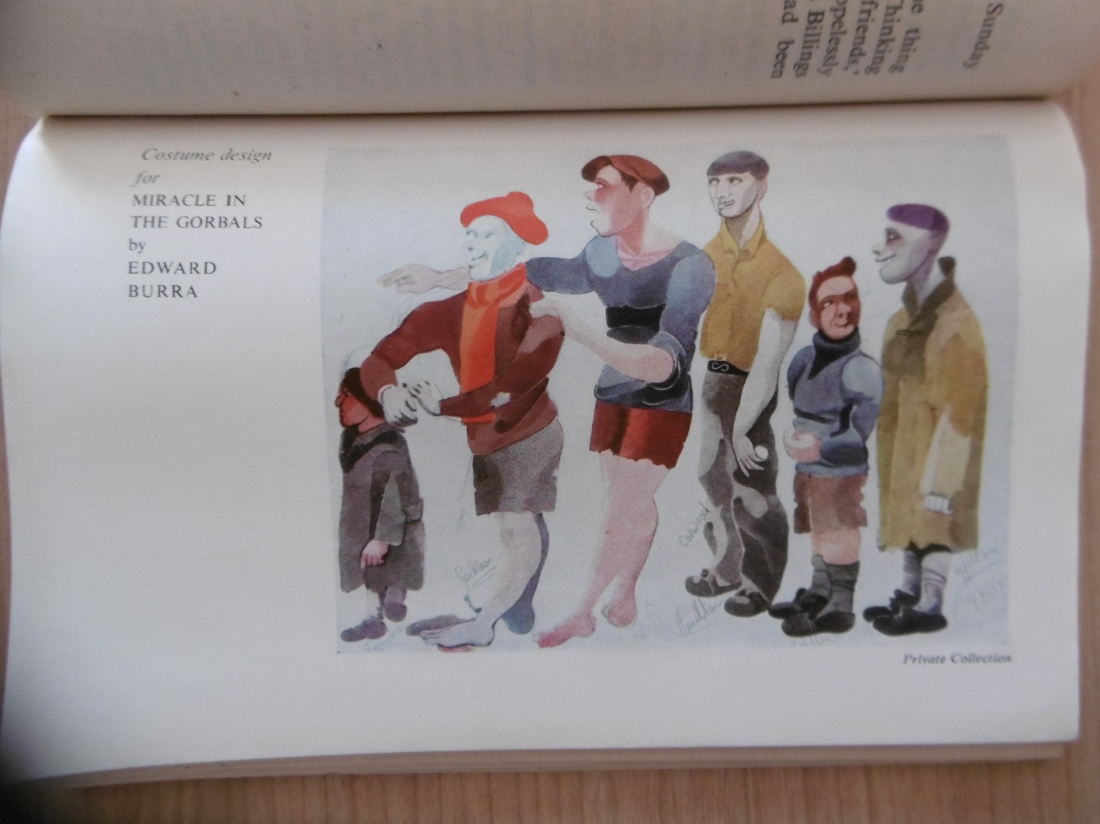 Edward Burra’s ‘Miracle in the Gorbals’: all soft colours and bulbous figures, with pencilled character names attached to the grotesque portraits. 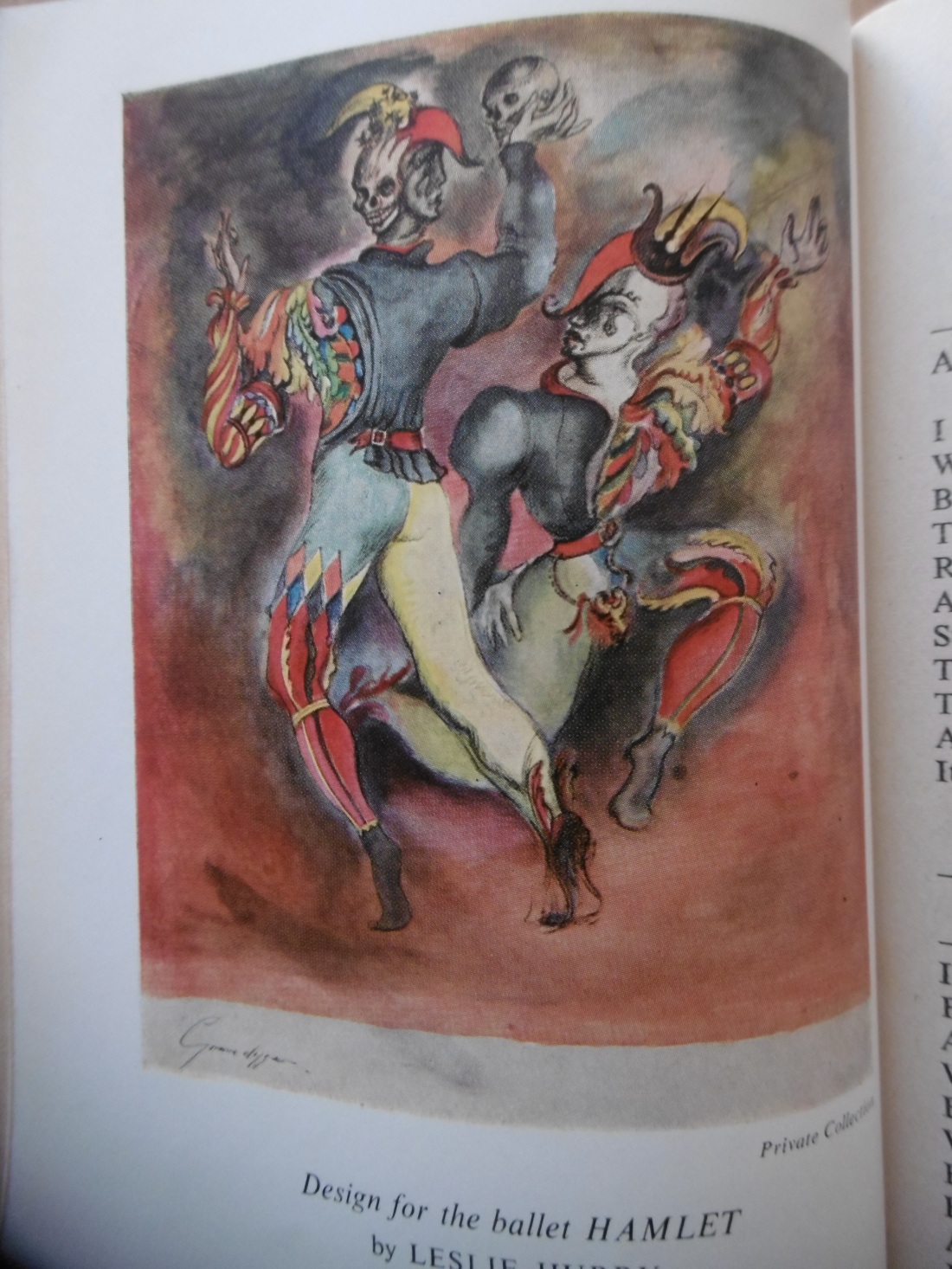 Leslie Hurry’s ‘design for the ballet Hamlet’ looks very commedia dell’Arte, with skull and a skullcap.

The author of ‘Growing up in Chad Street’, A C Wann, seems not to have left any online trail, so I can’t say anything more than I’d like to read more of their writing. It’s a story of how a small English town reacts to the woman who moves in next door to Peter and his family, when she starts carrying on with the itinerant pedlar and ex-bank employee. The men are envious, the women are furious, and she has what seems like a baby a year. It’s a remarkable portrait of the vicious responses to social transgression, the events seen through the eyes of an innocent and uncomplicated ten year old boy. 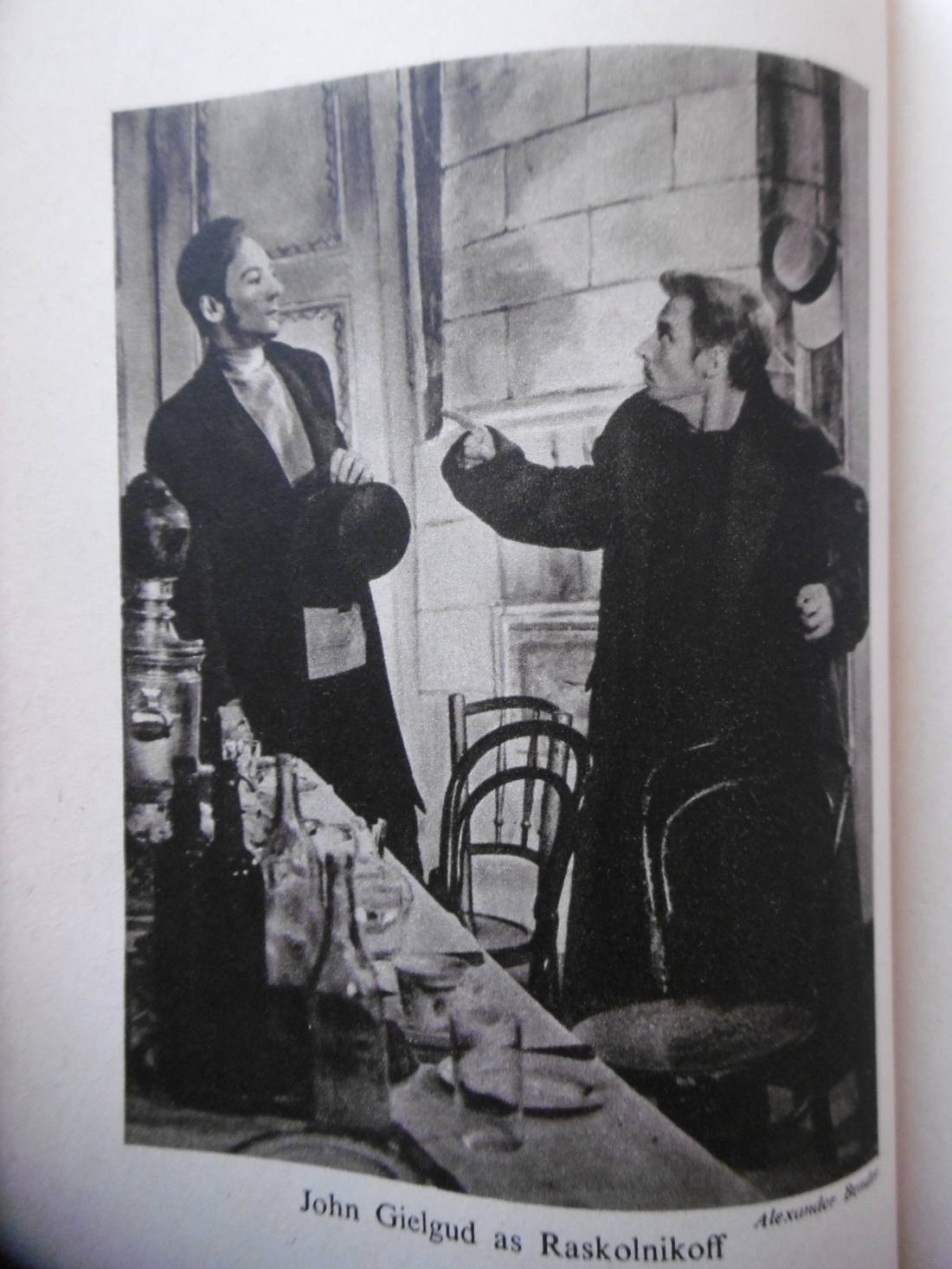 John Gielgud as Raskolnikoff in Crime and Punishment. Those eyebrows, that nose!

Sacha Carnegie’s ‘Snow’ is a haunting return to the brutality and horror of war. A soldier is reconnoitreing on skis, aware that the recent retreat by the enemy has left slaughtered and burnt-out villages all over the territory. Near dusk, he comes to a village where he thinks that no-one has survived, but hears the unearthly cries of a mother holding her dead baby in the snow, surrounded by her family and neighbours in a scene of true war atrocity. When the soldier returns next day with help, she has died, and the unit bury the village. Horrifying. The war is still a relentless memory in 1947.

One thought on “Penguin New Writing 30”