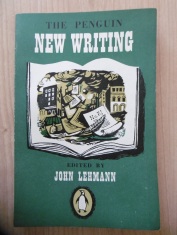 My feelings about the prevailing mood of the previous issues of Penguin New Writing have been borne out by the Foreword in this issue of autumn 1947, by John Lehmann himself.

‘Your Editor has had a dream. A mad, fantastic dream, not to be credited at all. [there follows a paragraph of escalating impossibilities] That Eton thought Harrow would do, and Manchester Grammar School decided to adopt top-hats out of respect to Eton?

No, none of these things. Something far more extraordinary. I dreamt that a brilliant new young writer had arisen and sent me in an MS. A funny writer.’

So there we have it. John Lehmann himself realised that the post-war issues were appallingly gloomy, and was looking for humour to leaven the weight of the post-war world in his pages. I find that very encouraging, because the sheer misery of the stories in this and the last few issues has been grim. Let us hope that Lehmann’s plea was heard, and that future issues have something funny waiting for us. 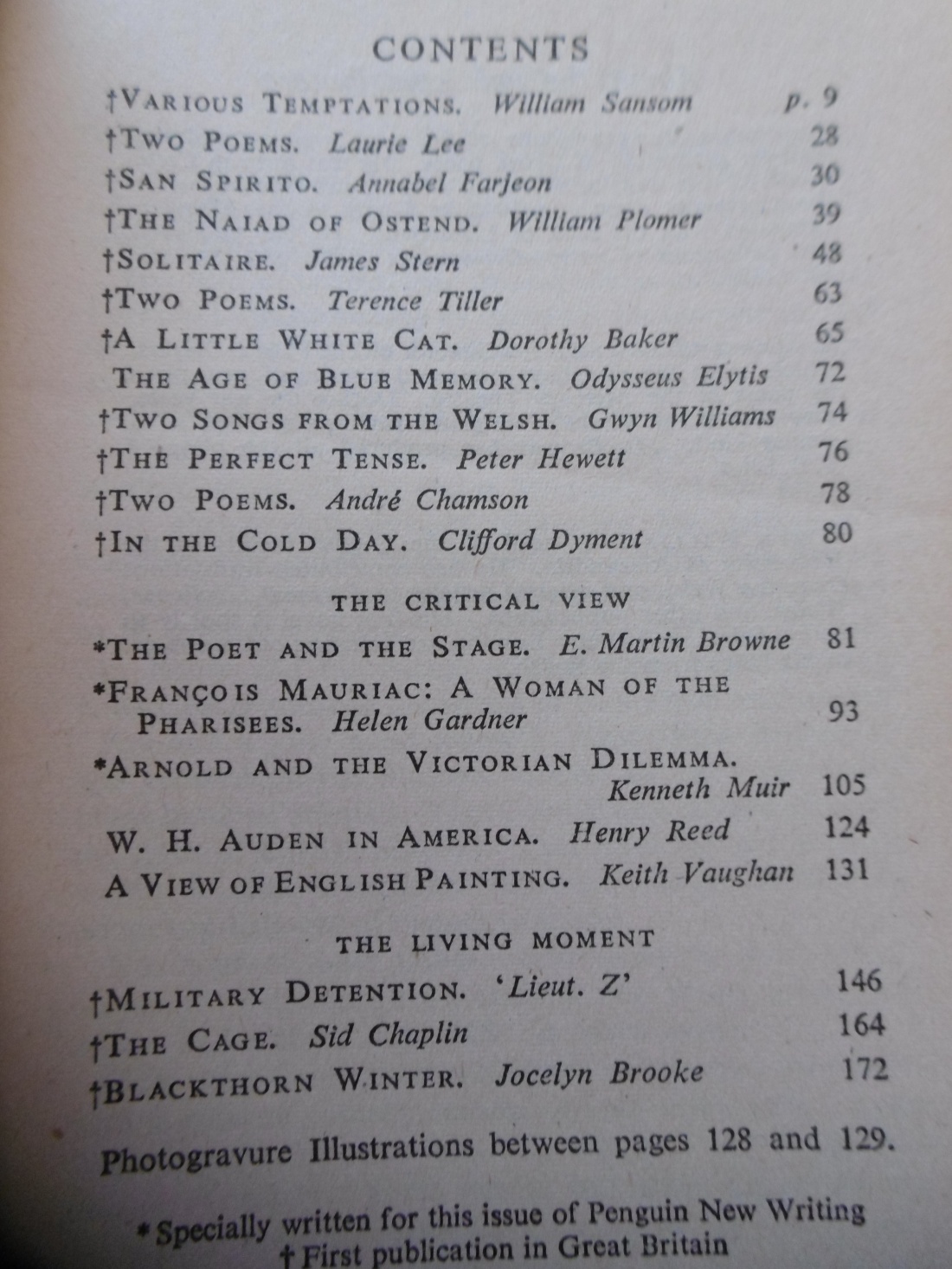 While waiting for Lawrence Durrell to discover his inner satirist, though, we shall do our duty and read some modern fiction for the good of our health. William Sansom’s ‘Various temptations’ is an assured, meticulous story of a man who strangles women he picks up, and how he does it. It’s frightening, not just because of the author’s assured use of tension, but because he expended so much effort in getting the details of this misogynist story exactly right. He’s written about murdering women in Penguin New Writing before.

Annabel Farjeon’s ‘San Spirito’ is the only piece in this issue that allows women to have opinions and not also suffer at the hands of men because of these. Though they do suffer. Two nurses in Italy with a day’s leave absentmindedly open a bottle of peach brandy while they enjoy the sunset and the peace around them. Before the brandy is finished we have learned that Hannah’s Jewish family have all died, and that Adina’s sister is in danger in Romania from their mother. At least they get to enjoy the brandy by themselves. Male authors, I venture to speculate, would invade the scene with lecherous doctors or patients and reduce the women to objects. Farjeon does not, and I am grateful for it.

William Plomer’s ‘The Naiad of Ostend, Or, A Fatal Passion’ is a sequence of delicate pastiches describing the difficult position of an early Victorian maiden at the seaside when she is consumed by a passion for swimming at all hours, and Neptune is consumed with a passion for her. Charming and dark.

James Stern’s ‘Solitaire’ tells the events that follow an Irish doctor’s ill-advised phone call to a girl he once met, and his invitation to take her out to lunch. The doctor is married, with a child, but chooses to live rather dangerously for a few hours in a New York restaurant with Stella, who knows his eight letters to her by heart and has been carrying the torch of all torches for him in all the years since they last met. A knife is waved, there is much being drunk, and one wonders why the idiot ever put himself in such a ridiculous and selfish position. Because, of course, the poor obsessed young woman gives him up all over again. She should have burnt the letters and had a life instead.

Dorothy Baker’s story ‘A little white cat’ also has an oppressed woman, the mother of Cyril, a fatherless child of the war who bullies her and his teachers and rules the roost because he knows no other way to behave. A colder, more unpleasant child I have never read. He loves a stray white cat, though, and pours all the affection of which he is capable over this oblivious animal, until he encounters a man who is tougher than he is.

There are two extremely long and not very interesting (to me) articles about poetry, by E Martin Browne (about whose wife’s book on wartime theatrical productions I wrote here), and Dame Helen Gardner. I ought to be more pleased to read Gardner’s writing, for she is a critical genius, but I’m not interested in Matthew Arnold at all. Sorry. Henry Reed’s essay about W H Auden in America is similarly erudite and important, I’m sure, but it’s not very readable. 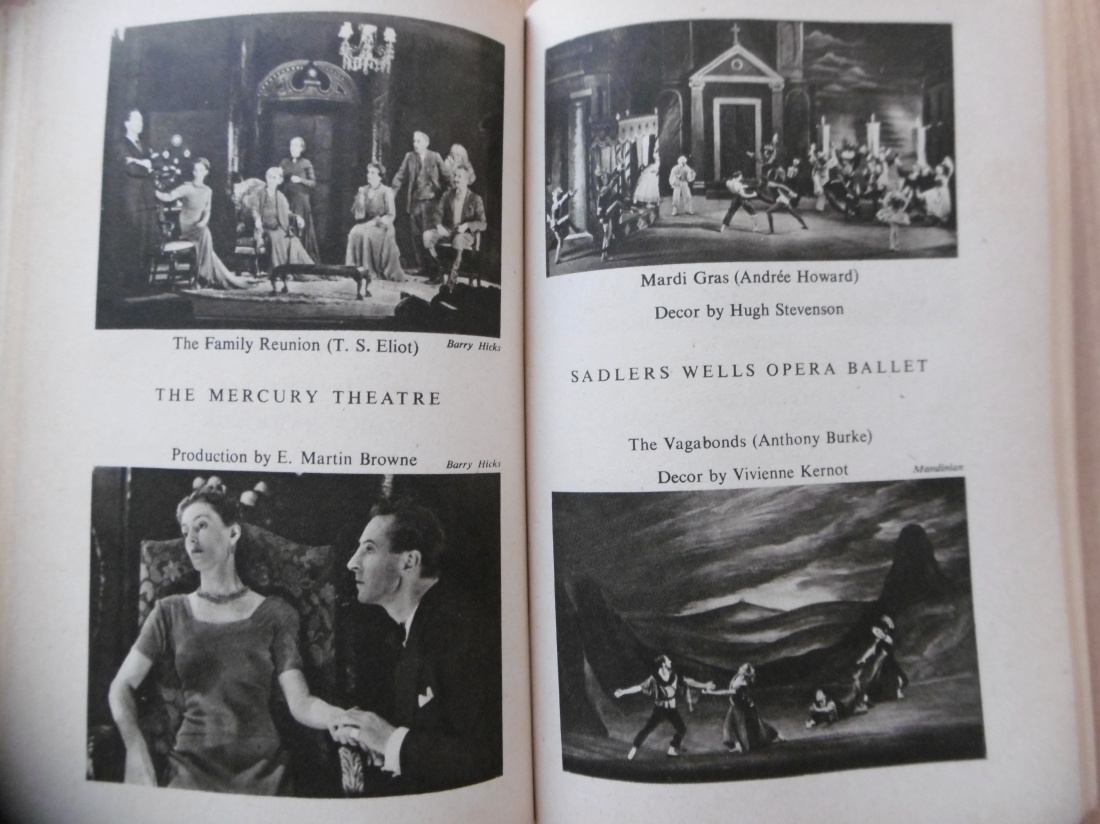 Barry Hicks’ photographs of Eliot’s The Family Reunion, produced at the Mercury Theatre by Browne, are classically stagey, serious tableaux. The photographs of productions of Mardi Gras and The Vagabonds at Sadlers’ Wells are similarly attractive for recording staging and costume. 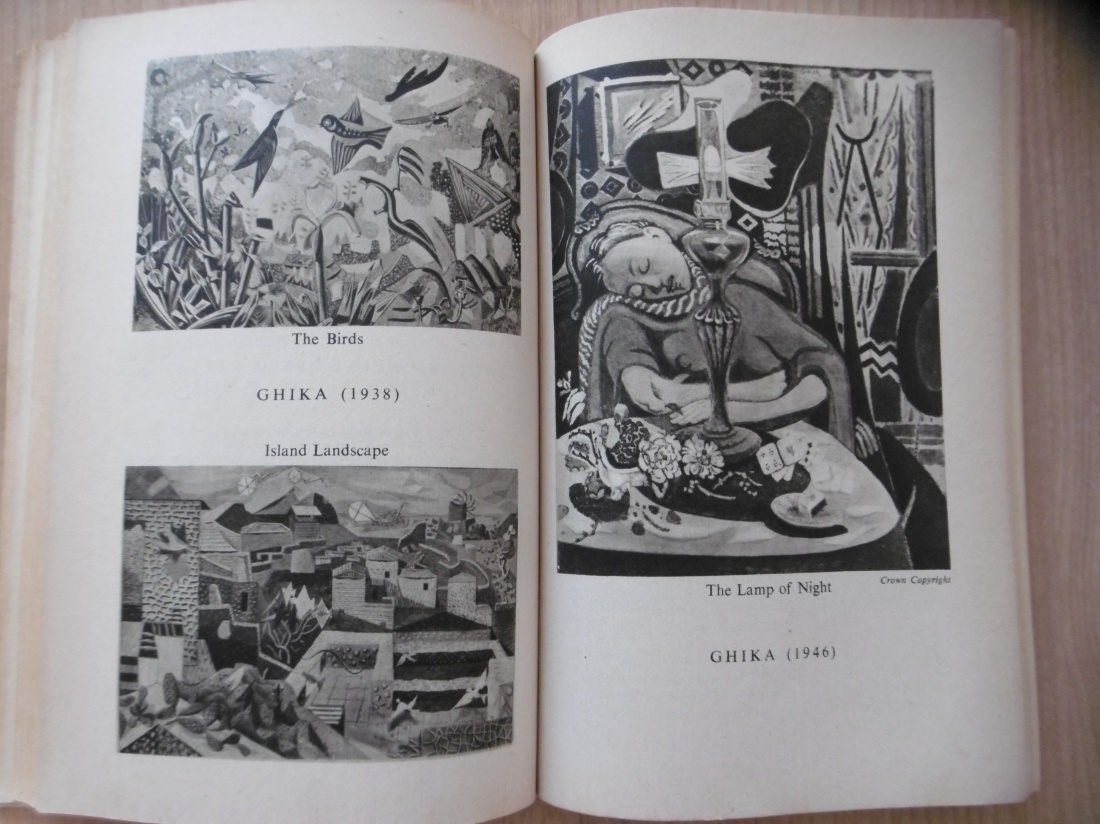 Ghika’s pre- and post-war paintings are glorious. I think he must be the Greek artist Nikos Ghika.

‘Lieut Z’’s ‘Military Detention’ is a long piece of reportage, on being in military detention, detailing the brutality and ill-logic of the system and the men placed in command of others. I hope the War Office read this piece carefully.

Sid Chaplin’s ‘The Cage’ is a tense vignette about miners ascending from the pit, when their cage gets stuck and the strands of wire begin to fail. It’s a thriller in miniature, unbearable to read.

Jocelyn Brooke’s ‘Blackthorn winter’ is cruel and unforgiving, and hopelessly, scrupulously true to human nature. It’s wartime, and a soldier is waiting to be sent abroad, and is missing his home and garden. He offers gardening help to a woman in the village, and a relationship develops, and it is so sad, and completely believable. The subtle shift from his to her perspective twists the knife decisively.