This is a neat and lush little ghost story, barely long enough for a novella, printed in 1941 in an austere wartime edition. In 1945 the story was made into a film of the same name, starring James Mason, and Margaret Lockwood as an entirely new character.

The story is the work of an established literary figure, possibly just a little bit past his prime and resting on former glories: the back cover of the dust-wrapper advertises five of Sitwell’s other works, plus a joint venture with his equally celebrated siblings Edith and Sacheverell called Trio: Dissertations of Some Aspects of National Genius. When A Place of One’s Own was published, Osbert Sitwell had not yet begun his monumental series of autobiographical volumes for which he is best known today: these would begin to emerge in a few years, after the death of his father and his accession to the title. Up to this date he had been notable as a patron of extremely modern art and literature, and as an author in his own right. 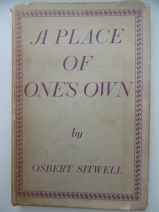 A Place of One’s Own betrays many prejudices, particularly that of people formerly in ‘trade’ setting up as gentry. This otherwise inoffensive couple buy a lavish home for their retirement and hope to make the right kind of friends. Mr and Mrs Smedhurst are a pleasant and earnest Victorian couple, with the right kind of attitude towards making life pleasant for everyone in their new life in Newborough (the invented seaside town in Sitwell’s 1926 novel Before the Bombardment). Unhappily, they have chosen to buy a house in which a maiden lady was secluded for most of her life, who was afflicted with long periods of madness, and in which she died. Her warders died two years later in an apparent double suicide. Nobody who has lived in the house subsequently has had a happy time of it. And then the Smedhursts arrive, full of plans for redecorating and for making friends.

I think that Sitwell must have been inspired to write this story by thinking through the dramatic possibilities of speaking tubes for communicating with the servants. The Smedhursts’ house is well appointed with these, and they become a focus for torment, communication beyond the grave, and panic-stricken messages when something is going badly wrong in the best bedroom. The story’s focus on madness and delusions also lets slip some nasty ways of describing people with mental illness, and those who aren’t quite like other people. The whole novella could be thought of as a study of the Victorian treatment of the mentally afflicted, making this the perpetrator of the crimes.

2 thoughts on “Osbert Sitwell, A Place of One’s Own”