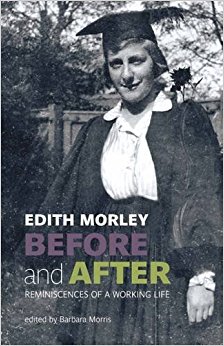 This is a memoir by the first female professor in the UK, Edith Morley, Professor of English Language at the University of Reading. It’s an essential read for anyone exploring the history of women’s higher education in Britain, and for those keen on reliving the struggles of women to make headway in a profession that really wasn’t sure they ought to be there. Professor Mary Beard’s Preface is warmly supportive of the history that Morley recorded.

Rescued from the archives by Barbara Morris, this memoir was rejected by the first publisher Morley sent it to, in 1944 — probably because of the wartime restrictions on paper, ostensibly because Allen and Unwin told her that ‘those who don’t remember these things will have read of them often enough in novels of the period’. How fascinating to find that in the 1940s fiction was considered to be an adequate repository for women’s history. The memoir found its way to the university archive with the rest of Morley’s papers. Although she had clearly gone over the manuscript once or twice, annotating and clarifying here and there, she doesn’t seem to have made any other attempts to publish it. She died in 1964. The main building for the Humanities subjects at the university is now named after her.

Edith Morley was born in 1875 in Bayswater, west London, and grew up in a comfortable home. She was sent to Hanover in Germany to finish off her education: the chapter on this episode might be useful for Dorothy Richardsonians, since she and Morley must have been there at around the same time.  The details that she records of her late Victorian London life are fascinating, and help a great deal with matters that are merely mentioned in fiction of the period but never explained. Street musicians, knife-board omnibuses, babies for hire to beggars, the Trafalgar Square Riots, children’s clubs, where the servants slept, so much detail.

But after school, Morley was back at home, and she had the good fortune to be allowed to make choices about what she would do next. For anyone writing a novel about getting late Victorian women into college, this is your source material. Morley didn’t choose a college because of its courses, or the excellence of its lecturers, but because she could walk there without needing a chaperone and because she could get herself there without doing the unthinkable and using public transport.  She attended the Ladies Department at King’s College, in Kensington, and worked her way through the certification offered by other universities for ladies studying privately. She was one of the first three women students to take a degree course, the Oxford Honour School of English Language and Literature.

Her life developed happily as a student, then as a lecturer building up cohorts of students to attain a critical mass of educated women to further seed the profession, and eventually her acceptance as a professor. Her stories of internal battles with obstinate male colleagues, and her stubborn refusal to accept nothing less than equality are beyond admirable: they make her a truly unsung pioneer in women’s education.

Before and After is a thoroughly absorbing read, with a great deal to reflect on by comparing what we consider normal now, and what she had to beg for then. If you’re into university politics, the later sections on how the Reading university establishment was divided into those who deployed ritual humiliation through committee minutes and their distribution, and those who pushed her upwards and onwards, are pure drama. The last part of the memoir rings with the fury of a woman scorned and triumphant, but perhaps triumphant too late.

One thought on “Edith Morley’s Before and After. Reminiscences of a Working Life”