Which Loki do you prefer?

The Tom Hiddleston iteration of Loki is out and about again, in Thor: Ragnarok, which I would rate at 7 out of 10. He’s a lot less Loki-ish in this film than in his earlier appearances in the Marvel Cinematic Universe, and I think he loses impact by being normalised. He was much scarier, devastating, dangerous, simply more impressive when he was unpredictable and on the loose. On Thor: Ragnarok he’s reduced to looking like an anaemic biker in a horrible leather catsuit: there’s no menace, no danger any more. Which I think is a bit sad. 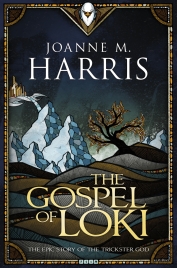 In Joanne Harris’ The Gospel of Loki (2014), Loki narrates the Norse mythology as a linear narrative. This book has the same tone as Thor: Ragnarok: irreverent, snappy one-liners, a bit of idiom, nothing too dated but certainly a modern retelling for modern readers who want a recognisable attitude behind the voice. This Loki really is dangerous, and with serious grievances that relate to the family issues that Thor: Ragnarok was tackling. But Harris’ Loki can stay vicious and devious while being hurt at Odin’s continual rejections, whereas Hiddleston’s Loki has gone quiet in his search for family acceptance. There’s no relish to his misdeeds any more, and he can’t seem to summon up his godlike attacking powers without man-made weaponry.

Neil Gaiman’s Norse Mythology (2017) covers the same ground that Harris did, and uses the same snappy dialogue style when the gods talk to each other. He keeps a more formal, very flat tone for the narration, and the jump between these gives Norse Mythology the edge over Harris’ version for impact. But I like Harris’ Loki better. Because he owns the whole story, and is quite obviously selective in what he is telling and not telling, the reader gobbles the story whole, eagerly following the breadcrumb trail of ‘we’ll get to that’, and ‘this comes up later’ to reach the ending. Gaiman’s version makes the best of the mythology as a Gaimanesque retelling (presumably because he’s already reinvented the material in the magnificent American Gods), but Harris remakes a whole new story out of the morass of loose endings and alternative versions of Norse gods mythology.

3 thoughts on “Which Loki?”