This is the penultimate issue of Penguin New Writing, from 1950, and I think John Lehmann is losing his grip (again). He actually opens the art section with two paintings by a woman, Wilhelmina Barns-Graham: this has never happened before. Other notable contributors include Paul Bowles, Cecil Day-Lewis, Kathleen Raine and Tom Hopkinson. Lehmann’s ‘Foreword’ is similarly more subjective than he has been in earlier issues, and has the air of a roman à clef, forecasting new and exciting artistic publications about to be launched in Britain. ‘A group of young ex-service men had founded at last the monthly to propagate the artistic ideals of which they had vowed themselves devotees seven years ago in the Middle East. The bolder wits, both male and female, of Oxford and Cambridge, had joined together to produce a magazine appearing twice a term which glittered with all the lovely exercise of intelligence and imagination the elder critics had long declared moribund in the land. Three poets of a middle generation, remembering how closely allied, in English literary history, the finest criticism and the finest poetry have always proved themselves, had issued the first number of a quarterly that was to establish the criterion of excellence in the arts of the ‘fifties. An entirely unknown young man, with no credentials except enthusiasm and flair, suddenly appeared to bewitch the jaded litterateurs of London into writing as they always dreamed they could have written, in a magazine he named Plato’s Cave‘. All this exuberance derives from Lehmann’s glad tidings that finally the ban on new magazines has been lifted (presumably from the rigours of Austerity). If anyone can identify the magazines and people whom Lehmann is so coyly not naming, I’d love to know. 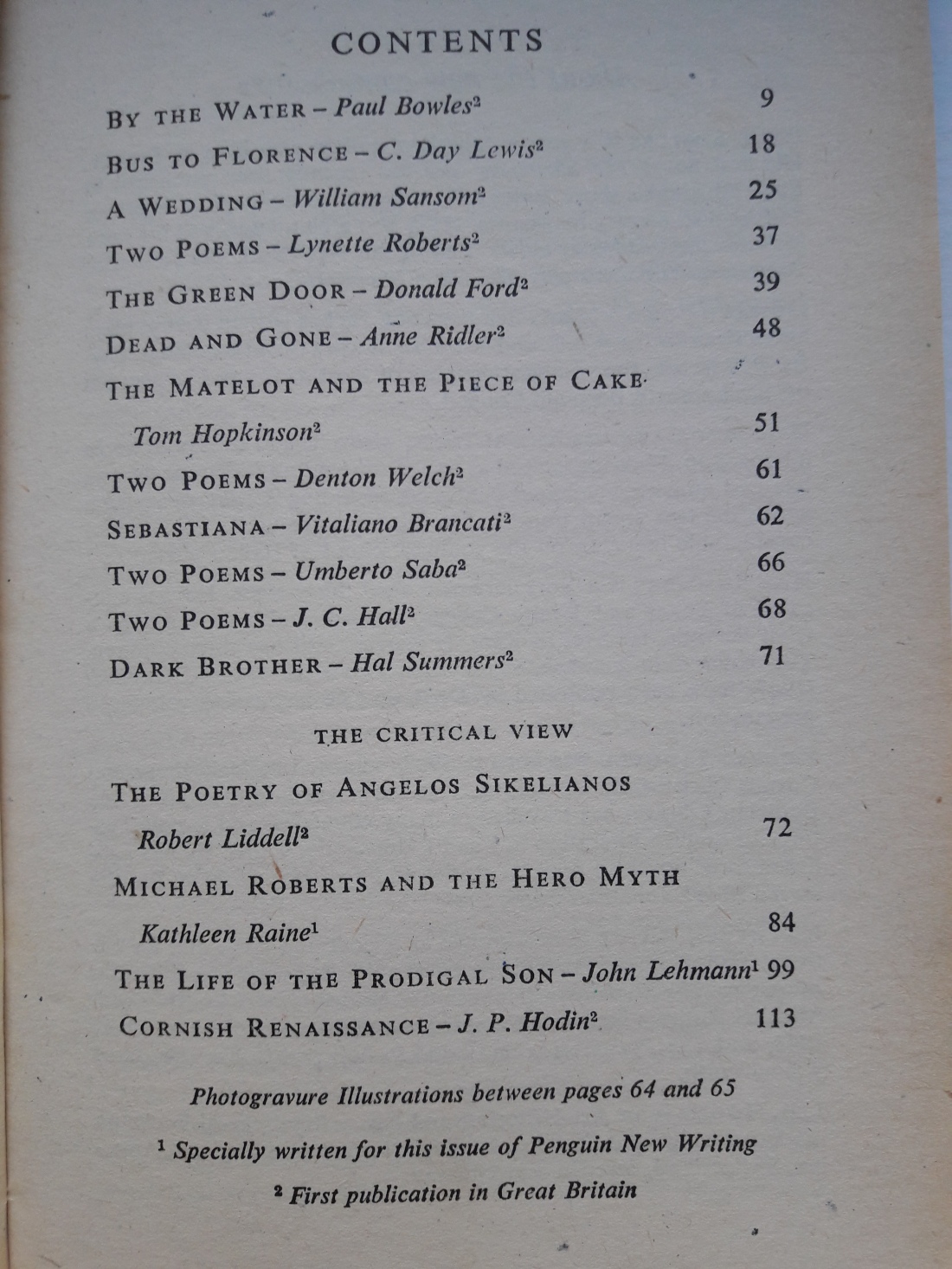 Paul Bowles’ story ‘By the water’ is a very odd set of events in which a Turkish youth takes the bus for a day to visit relatives in a town by the sea, goes to the hammam at midnight to get clean before he presents himself, offends the manager, a man with no legs or arms, and escapes being beaten up. He takes a disconcertingly unpleasant  revenge, and also takes the manager’s pet boy, who has fallen in love with him. Short, but peculiar.

‘A wedding’ is another skilful little story by William Sansom, with his trademark theme of violence against women. A Lapland church is the scene of a ghostly midnight wedding which could also be a vampiric ritual, with the bride (inevitably) as the sacrifice in a white gown.

It’s a shorter issue than usual (was the end approaching?) so the only article that I think is worth reading (I never critique the poetry, too subjective) is J P Hodin‘s summary piece on the Cornish Renaissance, the reason why Wilhelmina Barns-Graham was included, alongside Bernard Leach the potter (my parents still use their wedding-present set of Bernard Leach soup bowls with lids).