Ursula Le Guin has died, and I’m currently living in a different country to all my copies of her books. So I had recourse to my reading diaries to find out what I’d read of her work in the past ten years.

This is the only one of Le Guin’s historical fantasy novels that I’ve read, and I liked it very much. I bought it when I was in Portland, Oregon, because I had had no idea that she wrote historical fiction. It begins with a complicated loop of time, then proceeds naturally as Lavinia grows up in Etruscan Italy, and meets her future husband Virgil (as discussed in the comments below, this is actually Aeneas, but I’m still sure there was a meta-factor in there). I probably missed all the Aeneid references.

A student wanted to write about this for her dissertation, and to my shame I realised that this was an early Le Guin I had not ever read, so I gobbled it up quickly. It’s of its period, in that there is a total imbalance between male and female characters, and the anti-colonial anger in her story comes so clearly from the Vietnam era. It is a powerful, slightly holier-than-thou fable of the awfulness of human colonial exploitation, and of its inherent misogyny. I had the student work on this with C S Lewis’s Out of the Silent Planet, which made a good pairing.

I read this for the first time on the day in June 2016 that Jo Cox was murdered, and only five days after the massacre of 49 people in Orlando. It was a frightening time, uneasy and aggressive, when in Britain we were uncertain about the future because of a looming referendum. The Dispossessed is the story of Shevek the philosopher, of the utopian planetary state of Anarres, and his rejection by his own Separatist society, and his qualified welcome on Urras, the worldly and corrupt society which welcomes his validating presence but rejects his ideas. The parallels in this novel of the power of demagoguery, media lies, and political ambitions of the rich and powerful were painful to read at this time. It is a desperately sad novel, because the diminishment of utopian ideals always is. However, it’s also optimistic and earnest, with sharp things to say about economic and social oppression, as well as intellectual bullying. But I don’t care for the Hainish and Terran mediators, who make it possible for both societies to reach an accord. That’s not going to happen on our earth. 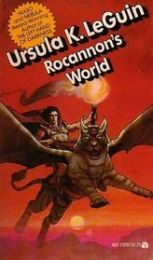 I knew that Le Guin’s much-anthologised short story ‘Semley’s Necklace’ had a long ur-story, as if I’d read it in a dream or in my very early teens, but I didn’t know its name, and assumed that it had been another short story of hers that I had long since lost track of. While shuffling books about in the L shelf about two years ago, I discovered this unfamiliar title but familiar story, my husband’s copy that had become invisible over twenty years in our joint Le Guin collection. This is the story of Rocannon’s first coming to Fomalhaut II, after Semley’s story, when he travels on wind-steeds with Semley’s grandson, and manages to foil a planetary massacre and alien takeover with firepower the Bronze Age civilisations of Fomalhaut II have never even imagined. I think Le Guin invents the ansible in Rocannon’s World. Her attention to the realities of time and space forces the reader to understand how long it takes to cross even a small area of space with a choice between instant death by remote missiles, or a wait of eight years for a human intervention by ship.

I first read A Wizard of Earthsea at age 13 or thereabouts, and seem to have last reread it in 2012 (but I know it so well I can probably patch together all the episodes in the right order, with some dialogue too). It’s a timeless, seminal, foundational novel, and a perfect world-building trilogy with The Tombs of Atuan and The Farthest Shore. In the late 1980s Le Guin revised her conception of Earthsea and its system of balance in magic in a major feminist self-assessment. I was selling books at the time and ordered this new Earthsea novel, Tehanu, for myself, and adored it and the other books that followed. Going back to the original novels, I could now see all the references to women as if they were written in bold highlighter, and how limited they were: witches being inferior to wizards, women as aunts, mothers, servants, cooks, wives, nothing more. As Le Guin realised and discussed in several important essays, when she was writing in the 1960s she simply excluded women from agency and power in her fiction. (Though, to be fair, she did tackle women’s magic in The Tombs of Atuan, which is all about the exclusion and confinement of women.) Revising how women and magic worked together in Tehanu was a marvellous, affirmative turnaround, and a challenge to the gendered writing of magic that no-one else had really done much about at this point. I still love the pre-feminist boy Ged, all sulks and arrogance and terrified skill, but I am also fond of Ged the Archmage, before and after the dragons returned to the Archipelago.

Once I get my books back, I will reread all of the Earthsea novels, and I might, perhaps, attempt The Left Hand of Darkness, which I have never managed to finish.