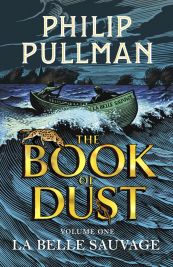 I was surprised by quite how much I wanted to read Philip Pullman’s next Lyra novels. Reading Northern Lights, The Amber Spyglass and The Subtle Knife when they came out twenty years ago was rather an ordeal for me, as I don’t much enjoy stories about children in danger, struggling to survive. But I devoured them, weeping my way through the agonising patches and revelling in the rest. So, once the hoopla had died down, I put La Belle Sauvage on my Christmas list, and reread Northern Lights as homework, to remind myself of the who and the what. I was surprised again: given the complexity of the themes in the first novel, Pullman uses such simple language, beautifully calibrated but still straightforward. The world he builds is marvellous, brilliantly laid out with no corner unplanned. So that was me primed.

La Belle Sauvage begins when Lyra is a baby, and her profoundly unmaternal mother Mrs Coulter seems to be searching for a lost jewel rather than the baby she gave birth to six months ago but has unaccountably lost. She only appears a couple of times, but her presence is perpetual and sinister: partly because the reader expects her to be longing for this child that everyone seems to want to control, and partly because she keeps cropping up as the instigator of appalling new institutions, such as the League of St Alexander whose child members inform on their parents and teachers. Never has the power of bullying been so well demonstrated.

The story is told through Malcolm, who works in his parents’ inn at Godstow, opposite the priory, where rumour has it that a baby is being looked after. Malcolm gets on with everyone, except Alice Parslow the kitchen maid, and he and Asta, his daemon, are particularly good at finding things out by using their eyes and ears. When Lyra arrives in the priory he rapidly becomes as devoted to her as is her nursemaid, old Sister Fenella, and when the time comes for Malcolm to protect Lyra with his life, he does it without hesitation.

La Belle Sauvage is Malcolm’s canoe, a solid craft that gets a makeover after Malcolm lends it to Lord Asriel to help him escape. When Malcolm is paddling around Oxford’s canals and waterways, he and Asta see a man lose an acorn, and then get arrested. They find the acorn, which is not an acorn at all, but since they don’t know what to do with it, it stays secret, until Dr Hannah Relf tracks them down with Bodley’s alethiometer, and finally Malcolm has someone who will answer his questions.

The major event in this novel is the rising of the waters that flood Oxford and most of south-east England. The sense of rising, deadly politics is just as inexorable. The waters throw up problems of survival and the necessity for boats; the politics are being stirred into activity by Oakley Street, the codename for the resistance to the Church and the Magisterium. The beginning of the flood throws Malcolm, and Alice, together to rescue Lyra in La Belle Sauvage and escape from the horrific Gerard Bonneville and his nightmarish daemon, a three-legged hyaena. They avoid detection by the Magisterium in their powerful steamboats, and encounter supernatural creatures from the deep, and elsewhere, and have to work out how to negotiate their way through a torrent of dangers. There are also Lyra’s nappies and feeds to manage – Pullman is particularly good at insisting on the unavoidability of a baby’s needs, no matter what adventure she is being escorted through.

There is so much new material in this novel, and much on the mutability of daemons that I don’t think we’ve seen before. I think the real power in the novel is the immersive storytelling. We wallow in Pullman’s deceptively easy style, and we linger on the details that open up new ideas in this marvellous world. A daemon can touch another person, so the great taboo is learned, not inherent. A daemon can also influence what form they eventually settle into, though they can’t choose. And, most horribly, a human can hurt their own daemon, and enjoy it. We encounter horrors, as well as great joy at the magnificence of the world and delight in its people.

Two years later, I read volume two in The Book of Dust trilogy, The Secret Commonwealth.