The Wife of Sir Isaac Harman was published in 1914, and is the story of Ellen Sawbridge who marries her older suitor Isaac Harman when she is 18. He delays the wedding by a few weeks so that the announcement of his knighthood in the Birthday Honours will appear on their wedding day, making her Lady Harman, to his delight and her bemusement. She marries him because she feels sorry for his anguish at not being able (so he insists) to live without her, and because he won’t stop asking.  After her fourth child is born he is persuaded that she ought not to have any more, and disgruntledly lets her alone. At the age of twenty-six Lady Harman is beginning to wonder how she can have a life of her own. Her sister Georgina – of whom Isaac disapproves because Georgina is unmarried and passionate about causes he doesn’t care for – is voluble on the subject of the suffragettes, but when Lady Harman also expresses an interest he flies into a rage. As far as Sir Isaac is concerned, his wife is his property, to do with as he wishes and only to do of what he approves.

Victoria Glendinning and Adam Roberts have both pointed out (and they’re not the first) that Sir Isaac is a thoroughly unpleasant instance of anti-Semitic characterisation. In her introduction to the Hogarth edition Glendinning suggests that Wells uses the stereotype of ‘the close Jewish family and the uxoriousness of the Jewish marriage’ (both seem like sweeping generalisations to me) as a model for the possessiveness of Sir Isaac’s character: this still leaves Wells writing as anti-Semitic, since Jewishness is used exclusively to represent appalling behaviour. Roberts points out that Sir Isaac and his children increase in vileness throughout the novel, making them less and less believable as people. They become obstacles and symbols of Lady Harman’s oppression, rather than human beings, the man she chose to marry and her four children whom she tries to love but actively dislikes. 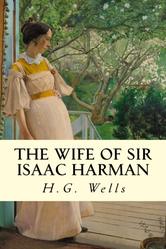 The Wife of Sir Isaac Harman has another flaw, in that Wells cannot keep himself out of the novel (a common trope in his fiction). He repeatedly intrudes his alter ego into the plot – in this novel he is a successful novelist called Brumley who falls in love with Lady Harman – just as Lady Harman is about to do or realise something interesting. This imbalance is maddening. The effect of these intrusions is to perpetually shunt aside the leading character, after whom the novel is titled, and thrust Brumley the secondary character into the foreground, again and again, as a preening opportunity for Wells’ ego. Brumley dotes on Lady Harman, and makes a fool of himself, and forces his affections on her when all she wants is advice and support. We are invited to laugh gently at his pretensions, at his foolishness, and the self-absorption of his personality, but I would so much rather he wasn’t there at all.

Brumley becomes the object of Sir Isaac’s raging jealousy, but could quite easily have been dispensed with in the plot since Sir Isaac is so demented that he would be incensed by imaginary attentions to his wife from anyone. But Wells will have Brumley in this story because he requires us to read yet another fantasy of a young and beautiful woman as the object of a rather older man’s devotion, as if that is all women are for. While the subtext of the novel is that women should not be viewed as solely as sex objects, Wells shows he is incapable of writing a woman who isn’t one. Wells devotes about half of the novel to tedious explorations of Brumley’s opinions and feelings which are not at all interesting. In conversation with Lady Harman, he launches into discourse with a parenthetical ‘if I may lecture a little’, and bangs on for pages until she interjects a practical observation, much more relevant to the ostensible subject of their conversation  that he has not bothered to consider. The man is a bore, and makes this novel a bore when it should have been something quite different.

What this novel should have been is Lady Harman discovering a purpose for her life. She discovers the origin of her husband’s money, and makes efforts to involve herself in his business by making it more humane, and less exploitative. Sir Isaac runs an empire of bread shops and tea-rooms, called the ‘Internationals’. The woman who comes to the Harman house to do the sewing tells Lady Harman about the crushing of her late father’s bakery business by the arrival of an International in the district, and about the rigid and punitive system of fines and low wages in the Internationals, with indignant allusions to sexual predation on young women who work in the public sphere without protection. Lady Harman’s eyes are opened, she does her research, and she decides to do something to redress the damage her husband’s business is doing to society. She devises a scheme of building hostels for young single women to live in, but Sir Isaac seizes her project and redirects it back towards the controlling of women, and the exploitation and domination of the cheap boarding house market. 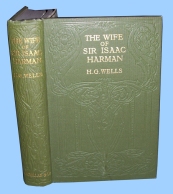 There may be more exploitation going on here, outside the novel. Wells borrowed his plot wholesale from Amber Reeves’ novel A Lady and her Husband (also 1914, recently republished by Persephone). He had had an affair, and an illegitimate daughter, with Reeves several years earlier, and he based his eponymous character of Ann Veronica (1909) on her. I didn’t much enjoy A Lady and her Husband  because I thought Reeves didn’t go far enough, and her leading character was too timid. But I wonder what Amber Reeves, and Wells’ public, thought of the uncanny similarity between their plots? Was it a pact, or a competition, between these two novelists to write about waitresses who go on strike for decent wages, and the exploitation of women working in public view in ‘respectable’ professions? Both novels feature tea-shop empires that gain their profits by paying shockingly low ages to their female staff, by insisting that they only employ a good class of young lady who of course lives with her parents and therefore does not need anything except a ‘supplementary’ income. This single plot point is so specific, and so closely adhered to, to make it impossible for A Lady and Her Husband and The Wife of Sir Isaac Harman to not be related, in intent as well as execution. Wells was a practiced self-publicist and a famous novelist: it’s likely that his new book would attract his usual publicity, and that she would be lucky to receive any reviews for hers, due to her much less well-known name, and her notoriety as his mistress.

All my books are packed and ready for moving house so I don’t have any resources to hand with which to check this, so someone else can look these points up for me: which novel was written first? And did any of the reviewers notice their similarity at the time?