In which I agree with the universal acclaim for two hugely hyped books that show no signs of losing any popularity.

Mary Beard is doing very nicely out of her television presenting work because (a) she’s being herself, unaffected and normal, and (b) she’s writing some well-received books about that work, and about the modern world, that derive from her day job. She’s a Classics professor, expert in the history and surviving writings of the pre- and slightly post-Christian Era in Ancient Greece, Rome and their territories. Women & Power: A Manifesto comes out of that training, and is an exploration (originally written as public lectures) of how women have been routinely silenced in history. It’s very short, and is the kind of straightforward feminist polemical writing that Virginia Woolf made into an art with A Room of One’s Own. Beard’s observations are, broadly, that:

It speaks the truth, supported with good solid evidence and reasoning. I loved it. It’s a perfect present for anyone who believes that the past influences today. 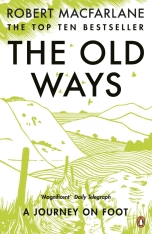 I confess that I have been avoiding reading this book for years, because I had been confusing it with Alfred Watkins’ The Old Straight Track, which is about leylines, with which I have no truck. Then recently I realised that MacFarlane is a writer in the Roger Deakins mould, science-based and eclectic, and felt like an idiot.

The Old Ways is about old routes for travel, in the UK and elsewhere, and how they work, and have been used. The first route is a walk MacFarlane did on a snowy night from his Cambridgeshire village through the countryside. It is very beautiful, but his account annoyed me slightly because it’s written with the unconscious assumption that anyone can and should do this kind of walk. Not if you’re in a wheelchair you can’t. If you’re a woman, you can’t do this kind of walk, at night, alone, by starlight and moonlight, unless you’ve got no qualms about being attacked. So that was not a good start: I would have liked to have seen some acknowledgement that the physical freedom of a six-foot man to walk and sail anywhere they like is not available to everyone.

But after that, I thoroughly enjoyed his travels. The walks are all worth writing about, they’re proper stories about something that happened on that walk, or that sea voyage, or that journey, because that event reflects the life and history of the route, through time. Walking through land colonised by settlers in Palestine is frightening and frustrating. Sailing to the Shiants, and to the remote islands where the guga hunt is going on, feels salty and buffeted with wind. Driving back from the Ridgway and seeing a panther in the ditch is just scary. (Another reason not to go walking in the dark without good reason, and protection.) It’s a fine read.

4 thoughts on “Believe the hype”