The blurb on the back on the Panther edition promises titillation in rather 1970s Observer fashion: ‘Perhaps you’d better find out what those fairies are up to at the bottom of your garden …’, assuming (a) that you have a garden, and (b) supervision of it is something you will be held to account for. But this 1972 book is really not what the title, and blurb, suggest: it’s a literary-historical study of how love, romance and sex (very mildly described) were presented through British folklore, myth and the supernatural, weighed down with a lot of clunky Freudianism. The amount of Freudian interpretation in this book, even of Shakespeare’s plays and Paradise Lost, made me suspect, possibly unfairly, that this was a project of Freudian analysis looking for a subject, but it is avoidable, if you’re not that interested in penis envy.

Let us consider the good bits: Duffy on Arthuriana and the Church’s co-opting of fairy roles and the figure of the Elfin Knight; a lengthy chapter on traditional folk beliefs about fairies; Spenser and the Fairie Queene. Although I think Duffy goes awry when she plunges into Shakespearean criticism, she makes a fascinating case for arguing exactly when fairies began to be given wings, and what Inigo Jones’ staging in the masque had to do with it. 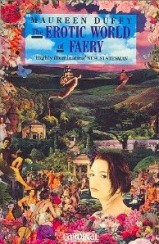 I don’t really buy the idea that Swift’s Lilliput has anything to do with fairies, but the rest of her eighteenth-century chapter, on Ariel and the Sylphs in The Rape of the Lock, is very persuasive. I don’t think she’s read enough on Scottish witch-hunts for her arguments that James I and VI’s British witch-hunting campaign was short-lived. And then she zooms off to psychanalyse Keats, at length, with too much cherry-picking from his biography to round out her arguments. She deals vigorously with Christina Rossetti’s Goblin Market, hurtles through Peter Pan, and ends by arguing (this was just after the British New Wave) that science fiction would be the new fairy home, among the stars.

The Erotic World of Faery is dated, and it’s very long (I haven’t posted any reviews recently due to wading through this). I do think that the Freudianism can be skipped without much of interest being lost. But Duffy is very good on human sexuality as reflected through fairy-tales, and the displacement activities that creating fairy mythologies can resolve. She’s an excellent literary historian, and writes persuasively throyghout. I think it likely that this was an influential text in its day: I’ve been editing Sylvia Townsend Warner’s Kingdoms of Elfin for publication in October, and Duffy’s book, which came out a year or two before Warner began writing her stories, includes many background details that also appear in Warner’s stories. Angela Carter may also have read it. It’s certainly worth getting hold of if you’re interested in the fairy world.