This is a beautiful Little Toller production, a country yearbook from the 1930s, in which the sublime engraver and illustrator Clare Leighton and her husband took on a Buckinghamshire cottage and its garden. They still went to London to work at their professions, but lived part of the week, or month, in the cottage, and worked on the land.

It must have been a huge garden, since they planted so many trees, and seem to have spent all their waking days in the vegetable garden. I don’t care for Carol Klein’s gushing introduction, which mainly reveals that she’d never heard of Clare Leighton before now: I expect she (a British TV gardener) was asked for the selling power of her name. So skip over that nonsense, and plunge straight into April on a hillside in the Chilterns. Noel Brailsford and Clare Leighton have just arrived at their cottage, and are taking seizin. They walk around and marvel, and plan, and begin to see the bits that need work, the things that they’ve missed a month ago, and the things that are to happen that they must keep an eye on.

Four Hedges is about the growing season, and how to manage the work and the harvesting, the ebbing and flowing of the growing year. All does not go as it should: there is drought, and a disastrously unseasonal early spring. Leighton’s illustrations are a wonder, especially the full-page scenes of apple-picking, scythe-sharpening, tree-planting, seed-sowing. They aren’t timeless, as Klein would have us believe from her babble: they are rooted in the 1930s: the width of the trousers, the graphic style, even European politics are echoed in a cropped bob or the sweep of a bun at the back of the neck, and the length of a skirt. Leighton’s art is rooted in her period, and the experiment of a country garden, and serious small-holding, backbreaking work, is also a 1930s endeavour.

It’s the kind of book that you could dip into, to settle into and read slowly through the year. Malcolm Saville’s Jane’s Country Year from 1946 is in the same tradition: a focus on the seasons, the plants, birds and animals, and the rhythms of living among these, and having to live from these. I learned important information about when to pick apples from these country beginners, which confirmed my suspicions that I’ve been doing it wrong in my own newly-acquired bit of country hillside. It’s a book to go back to and learn more from, when I’ve properly digested its first lessons. 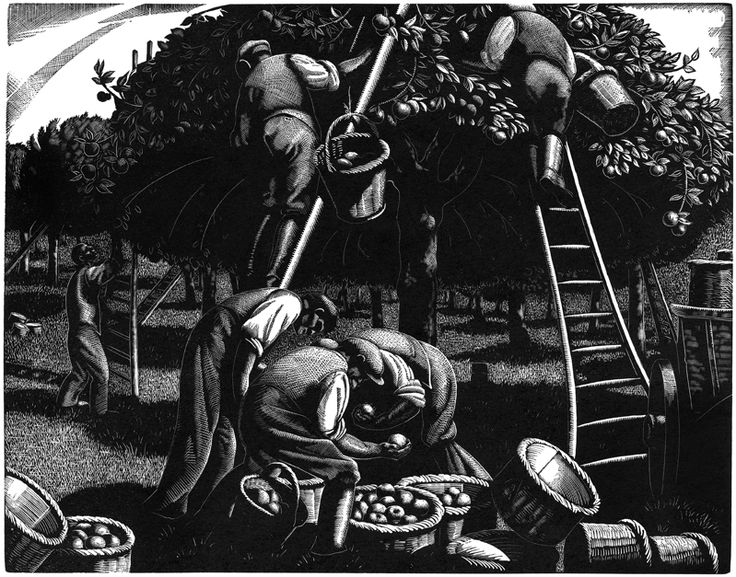