For a change, here are three books I’ve read recently that I liked a lot. They are all satisfying, well-crafted reads, and I’m going to keep them all, but I don’t have vast amounts to say about them other than ‘they’re good’.

Mary Stewart writes about magic so convincingly that there must be a formula to it, the way that she connects elements of the plot, the characters and the narrative to produce the conditions under which the reader will accept that a schoolgirl will see the future in a glass ball shown to her on a picnic by her mysterious (un)godmother. Thornyhold is perfectly plotted, a story set in the late 1940s, but it’s so slight that I wonder whether it had been forgotten, or rejected, and reframed and finally published in 1988. It feels undeveloped, and ambivalent about whether the magic in the plot was actually just good psychology.

It’s based on an unhappy child finding her place in the world, and people and animals, to love. Geillis is a lonely child whose stern mother won’t let her have her own pet, and whose vicar father is too vague to really notice. She’s sent away to school since the local school is impossible (for her class), and there she is bullied, retreating into a belief in fairies and magic that gives her an inner awareness when she encounters the real thing. Her mother’s cousin Geillis appears at unexpected moments, to teach her about natural history, take her on outings, and generally be the older reliable figure of unconditional support that the younger Geillis lacks. When the older Geillis dies, leaving the younger Geillis, now unexpectedly orphaned, her house, the forest lodge called Thornyhold, the younger Geillis can come into her kingdom. It contains a cat, a stillroom and a crystal ball. There’s a coven nearby. There may also be a prince in the wood. What will the vicar’s daughter do?

Jessie Kesson is a Scottish writer, born into extreme poverty in the 1920s, who married a farm labourer and worked in the harsh but beautiful agricultural landscape of Aberdeenshire, before moving with him to London to become a journalist and novelist. The glitter of mica refers to the lure of Aberdeen, the granite city whose flecks of mica glitter in the wet, where the cottars went on their annual day out to stare at prostitutes, and where the cottar’s daughter Helen goes to the university on a scholarship, earning her diploma in social sciences. She comes home to be a youth worker in the 1950s, and unwittingly walks into a web of antagonism between her father Hugh, the Darklands head cowman; her ever-resentful mother Isa; the over-welcoming single mother Sue Tatt; and Charlie Anson, the councillor on the make.

If you know Aberdeenshire writing, how it reflects the stern insistence on folk knowing their place; where moving up, or down, in life, through marriage, or education, or skill, is a matter for endless, vicious commentary, you’ll expect Glitter of Mica to be a tragedy (it is), and a magnificent portrait of rural life (it is). Kesson follows the pattern established in the Aberdeenshire rural fiction of Lewis Grassic Gibbon and Nan Shepherd. Her glitter of mica is the small shiny moment of perfection and beauty, that hardly anyone will see, that makes stone into a jewel, but is also utterly out of place, unlike its substrate, and liable to be crushed into dust by the stronger world around it. 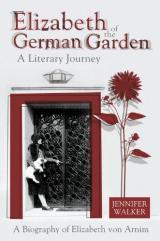 Jennifer Walker, Elizabeth of the German Garden. A Literary Journey

This is the most recent biography of Mary Beauchamp, the older cousin of Katherine Mansfield, who married a Prussian aristocrat and became Countess von Arnim, and – after being widowed – made a disastrous marriage to Bertrand Russell’s appalling elder brother Francis, becoming the estranged Countess Russell. Her first novel was called Elizabeth and her German Garden, and all her subsequent novels had ‘Elizabeth’ or ‘by the author of Elizabeth and her German Garden’ on the title page. It was only in the 1980s when Virago Books began to republish her novels that she became known by the invented name of ‘Elizabeth von Arnim’, which she never used herself, and that’s what we all know her as today.

This carefully explained fact of literary history is only one of many excellent things to be found in this biography, and the division between ‘Elizabeth’ and Mary as two individual characters is the theme of the biography. It’s not scholarly; it’s by a fan and a careful reader, who had very privileged access to family diaries and letters, and it reads as a ‘biographisation’ of these primary sources. Walker’s reliability and scrupulous care for detail is never in doubt, and the exhaustive extracts from the diaries establish the emotional mood of Mary’s life, as well as what it might have been like living in her orbit, in her many homes, as a world-famous novelist of distinction and many contacts. H G Wells is a constant presence, and only one of her many lovers. Walker’s close adherence to the primary sources is sometimes perhaps too close, producing some unexpected non sequiturs that cry out for amplification. Mary’s father’s diary reports in the late 1890s, almost casually, that Mary’s elder sister Charlotte, then aged 14, who had been left unsupervised with the other children except by servants while their parents travelled abroad, had given birth to a baby boy. The child isn’t mentioned again, and the next mention of Charlotte is that she is ‘blossoming’ at the age of 18, getting ready for marriage. There’s a novel in that. It’s a remarkable life.