If you like the gentle narratives about English rural life in the early part of the twentieth century by ‘Miss Read’, you’ll like Achachlacher. It’s an epistolary novel about life in the Inner Hebrides, so gentle as to be barely there, and contains hardly anything said in anger, or that might cause controversy.

Emma L Menzies was the wife of a minister on Mull, and seems to have published these gentle (that word again) letters from a fictional minister’s wife living on Mull’s pen-name of Sonas, in Life and Work (the Church of Scotland’s magazine) and The Scots Observer (a conservative literary weekly) in the early 1930s. The three sets of episodes were printed privately as a book by an Edinburgh printer in 1936, ‘available from Mrs Menzies at the High Manse, Tobermory’, and you can still find copies available online for not very much money. I found mine on the list of a dealer and bought it out of curiosity. It’s not the most exciting novel I’ve ever read, but it 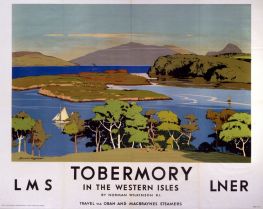 was pleasant to read, and has several points that interest me.

The first is that this is Kailyard fiction without the melodrama or the deaths. Kailyard was a hugely popular mode of writing in late Victorian Scotland, and depended on emotional turbidity, the wringing of hearts with tragic scenes, noble sacrifices (often predicated on an only son’s loving relationship with his widowed mother) and the purity of Scottish village life compared to the iniquity of the towns. J M Barrie was a leading Kailyard author, but he specialised in making you cry with the pathos of it all, whereas Emma Menzies ignores opportunities for emotionalism and concentrates on describing the delights of living in the Highlands in a small and universally benevolent community. The lack of any negativity in her invented village of Achachlacher was probably diplomatic, but – given that she was writing as a minister’s wife about a minister’s wife – there’s also a missed opportunity for homilies about the power of God’s forgiveness. No-one on Sonas does anything that needs forgiveness. No-one on Sonas gets drunk, fails to keep the croft going, has an illegitimate child, or poaches. Or, at least, Emma Menzies doesn’t write

The letters are from Isabel Dewar to her close friend Elizabeth who is teaching (and later marries) in India. Isabel’s husband Sandy must be least religious of any Scots minister in fiction, since the only ministerial acts that he performs are the occasional grace and one christening. Isabel is also not an overtly religious character, certainly not evangelical, which perhaps represents her Church of Scotland persona, which was not one to scare the horses. In the first series of letters the manse is looked after by a local girl called Murdina, but in the second and third Isabel does all her own cooking and housekeeping, so much so that visitors are handed a list of chores to help with during their stay. They have a cow called Mairi, and hens, and a garden that they cultivate assiduously. The community is agricultural, with a shop, but there is no mention of a pub: was Mull dry in the 1930s? The atmosphere is serene and peaceful, even during the war, and the most exciting thing that happens is during the annual Show, when the caber breaks and cannot be tossed until the minister has organised the felling of a replacement.

Apart from Murdina, the characters who come into and out of the Menzies household are Sandy’s fellow ministers on the island. Here my knowledge of Scottish religious divisions fails me because I’m not quite sure whether these are all Church of Scotland divines, or whether the C of S is mingling freely with the Free Church, the Catholics, the Baptists, the Episcopalians and any other division I may have forgotten. It’s all so friendly, everyone mucking in together to help a new minister and his wife move in, that when the new wife makes a bitter remark about her life having been wasted in moving her husband’s books which he then ignores her for, this comes as a jolt. We will read no sectarian remarks about religion: the angriest remark in Achachlacher is about a woman’s dissatisfaction with her lot in life, but this is passed over with a gentle sigh at her lack of appreciation for books.

For the modern reader there is an additional discomfort in the inherent attitudes twards the Gaelic speakers and the Highlanders from a Lowland perspective. It’s probably also class-based, but there are rather too many jokes in the letters for me about quaint Highland customs, sayings, practices and the like. And definitely too many jokes about the inability of Gaelic speakers to pronounce English words properly.  But for all that, these letters aim to please and to soothe, and if you’re looking for that, and some quaint domestic tales, this is a fine book to be trying.