I found this book of travel writing about the south-west of mid-1950s USA in The Second Shelf, a new antiquarian bookshop in London specialising in works by women. This was only the second book (partly) by a man I’ve seen there (the other was a lesbian pulp novel apparently written by a man with a female pen name: ask the shop for details). Priestley would never have got into the shop’s stock without Jacquetta Hawkes to sponsor him, and rightly so: Journey Down a Rainbow lives because of her writing, and is weighed down by his pompous grumbling. They devised the books as a bilateral travelogue: he writing letters to her about his observations on the modern USA, its consumerism and public entertainments, and she writing letters to him what she was seeing of prehistoric and Native American culture, architecture, craft and ritual. 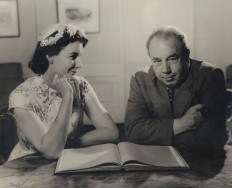 At the time of the book’s publication Jacquetta Hawkes was a distinguished archaeologist, but nothing like as well-known as her husband. Priestley was a Name, as a novelist, essayist, playwright, and pronouncer on social issues. He’d been at it since the 1920s, so had a fairly high opinion of himself. Not so much that he expected a certain standard of entertainment, as he seems relatively modest in his requirements when travelling for work, but that he expected his views to be listened to and read by millions, and wrote accordingly. At the same time, he was writing these letters to his wife, so there is an odd blend in intimacy and formality in them, of the personal and the public. He visits Houston, Dallas and Fort Worth, and has much to say about the science fictional nature  of modern America, and the giant scale and moral inadequacy of its aspirations. Overall, he’s dismissive and critical, and condescending when he finds values or achevements he can praise. This book does not show Priestley at his jovial best.

Hawkes, on the other hand, while as authoritative as her husband, displays a lot more self-knowledge and humility, and is exploring her allotted part of the US – Alberquerque, Santa Fe, Mesa Verde, Taos and Los Alamos – with a professional’s interest rather than a professional’s grumbles. She was the first woman to gain an archaeology degree from Cambridge, had written the leading books on European prehistory, and would later develop her anthropology expertise with work on the Minoan civilisation. Her letters about her visits to Native American prehistoric sites, and to their villages and festivals, are full of wonder, and appreciation for their art, integrity, survival amidst an encroaching alien culture and their religious beliefs. She ends her trip thoroughly satisfied with what she has found; he doesn’t. She is critical in parts (mainly about modern America), but also acknowledges her own sense of entitlement, and points out where her assumptions had been wrong.

It’s an odd book, created (I suppose) out of a desire to write something together but from their widely separated expertises and interests, on a joint trip to see colleagues and give talks. There isn’t a lot of cross-over or comparison, not much sense that JBP was reflecting on what JH had found, though she does develop his new invention of Admass culture as an anthropological conceit. It’s a curiosity, though could also be extremely useful for anyone looking into 1950s history of those areas of the USA: masses of first-hand impressions and discussions. It’s also enjoyable; not quite a page-turner, but every page has something to think about from what JH has observed, or sign heavily at as JBP grumbles on.

3 thoughts on “J B Priestley and Jacquetta Hawkes, Journey Down a Rainbow”