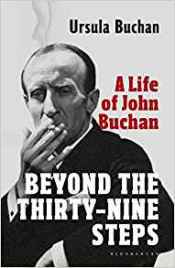 Does the world need a new biography of John Buchan? There have been three so far: a very thin and respectful one written a few years after his 1940 death, in an atmosphere of sincere grief and hagiography. Then there was Janet Adam Smith’s 1965 biography, invited and facilitated by the family, which was the standard for many years. Then there was Andrew Lownie’s 1995 The Presbyterian Cavalier, which went deeper into the politics and added a mass of small details only detectable when compared with JAS. And now, after another 20+ year break, we have Beyond The Thirty-Nine Steps. A Life of John Buchan, Ursula Buchan’s biography of her grandfather, and it is very good indeed.

Part of the success of Beyond The Thirty-Nine Steps (a phrase I used as the subtitle for a collection of essays on Buchan that I published ten years ago) is that Ursula Buchan is an extremely good journalist. Her investigative approach bravely took on tackling the vast amount of private Buchan family papers, photographs and artefacts, and she reports with satisfaction that ‘research for this book has inevitably been accompanied by the crump of exploding myths’. There are far too many myths associated with John Buchan’s works and life: I’ve been wading through them for years in my own research. Making sense of them can only be done if you have access to the primary evidence, and if you understand the context. JAS and Lownie only had partial access, and weren’t part of the family: Ursula had both.

This embarrasment of riches brings its own problems. Ursula found writing the book a suffocating experience when faced with the weight (physical and emotional) of the material she had to work on, over four years. She found that the way to stay sane was to concentrate on one small area ‘until the panic had passed’, and then she could face the immensity of the job again as a whole. Then there was the subject himself, the founder of the Buchan / Tweedsmuir dynasty and a very much-loved figure in her family, although she never knew him. ‘It became a matter of pride to finish it; I had a role model and I couldn’t let him down’.

The biography is arranged along a conventional linear narrative, from Buchan’s birth in a Fife manse in 1875 to death as Governor-General of Canada in 1940. While almost all the books are discussed (Buchan published over 100 titles, only a little over half are fiction), this isn’t a critical or literary biography. The books are how Buchan earned his living, and the work that they took to research and assemble structured his days and his life. What I found most interesting in Beyond The Thirty-Nine Steps was the new access to Susie, Lady Tweedsmuir, whom Ursula knew in her retirement in Burford. Seeing Buchan’s life again through his wife’s eyes was highly illuminating, of his character and of how she created her life by ensuring that Buchan had everything that he needed. She wrote novels and memoirs herself, and set up an important library scheme for remote Canadian settlements, but as soon as she left Canada after Buchan’s death, the library scheme appears to have disappeared, which seems a terrible waste of effort.

Susie doesn’t dominate the narrative by any means, but Ursula has achieved a new perspective on her grandfather by ensuring that the familiar aspects of his life – author, barrister, mountaineer, fisherman, civil servant, journalist, publisher, historian, propagandist, administrator, best-seller, politician, Governor-General –  are now seen as those of a husband and father, as the financial prop of a large number of dependants, and as a very devoted life’s companion. If you’re a fan of The Crown, Tommy Lascelles is in here too, as George VI’s assistant private secretary, and a great help to Buchan when dealing with the royal family. Ursula also makes sure that we see Buchan’s vitality in incidents unrecorded in the earlier biographies. My favourite concerns an impromptu mountaineering adventure, on an official trip through the Canadian north-west up the Mackenzie River.

JB suggested that the party climb Bear Rock, which rose up a sheer 1,300 feet from the bank … He behaved like an old hunter that pricks up its ears  at the sound of a horn and gallops to the paddock gate. He decided to climb the face, which had never been climbed before, and some of the party followed him. Although JB reached the top, the rest became stranded on a crag and had to be helped down off their precarious perch by local guides with ropes.

With due respect to the earlier biographers, this is the biography to buy: for sheer readability, for balance and fairness (Ursula does not hold back from criticising the great man’s flaws), and for solid historical ground travelled over lightly.

Disclaimer: I’m in the acknowledgements, as are several of my books and articles about Buchan’s fiction.

8 thoughts on “Ursula Buchan, Beyond The Thirty-Nine Steps”

Leave a Reply to Claire (The Captive Reader) Cancel reply